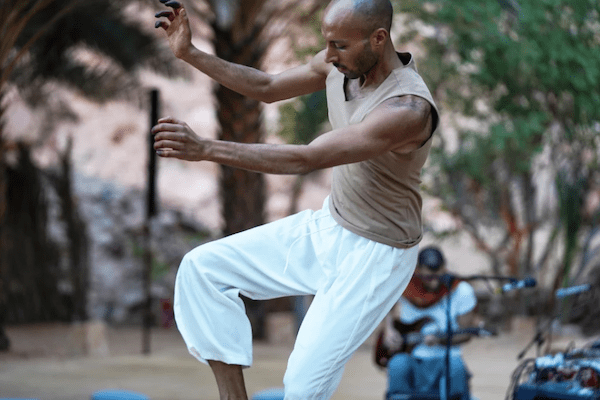 ALULA: A trio gives voice to their art to put music, dance and poetry in the spotlight at the AlUla Wellness Festival.

Sitting on a raised platform, Raghad Fatahadeen recites poetry in a soothing voice, while Mustafa Fahmi plays music in the background. At the front of the stage, dancer Bilal Allaf performs an elaborate dance, expressing the emotions the poet is trying to convey.

Fatahadeen, 27, comments on her work: “It’s not exactly poetry. It would be more like a guided meditation, like a talk. We don’t know what it is, so we call it spoken poetry”.

Allaf got to know Fatahadeen when he saw her reading his poetry at an open-mic night. He says: “I didn’t know what Raghad was writing, it wasn’t necessarily poetry but rather nature. So I approached her and asked her if there was a song she would like to read while I improvise. Naturally, she initially objected to the idea. We had to convince her, and then finally we performed on stage for the first time”.

They both said that the audience remained completely silent during their first performance. They initially thought the congregation disagreed, but the applause that followed was loud enough to reassure them.

The duo then added Mustafa Fahmi to the mix to provide background music for the multi-sensory experience.

Allaf said, “I was maybe six or seven years old when I started getting interested in dance. I always wanted to be in the heart of a place and put on a show that would grab people’s attention.

As a child, when he moved to Germany, he was finally able to find something in the art world that he loved to do.

He explains that he was extremely committed because he wanted to learn as much as possible. Dancing did not come naturally to him and he had no training in music, dance or rhythm.

There were even times in his life when he stopped dancing, but he always came back to it. After a nearly three-year hiatus, it was the COVID-19 pandemic that encouraged him to return to his art.

He immersed himself in the world of dance again, this time at his own pace, and began to practice regularly.

He says: “I tried to understand the importance of dance in my life, in society, but also of dance as a language”.

He began to explore improvisation rather than choreographed dances, and continues to do so in his current shows.

He specifies: “With improvisation, I have the impression of being able to better express my emotions, I think it’s a form of storytelling in its purest form. I feel like it’s a form of non-verbal communication. As a performer, I find it to be a very profound expression”.

Fatahadeen, a passionate poet, has performed at many wellness retreats. Talking about her writing process, she says she “received” her first text.

She adds: “I didn’t sit down to write it, it just came to me, and I wrote it as quickly as possible”. She shared it with her friend Allaf and the duo then started building their art.

According to her, the trio brought all three elements together to offer something for everyone. She added, “I think bringing all of these things together creates a holistic experience where we don’t just perform but create a space, inviting people to reach a state where they connect with us and receive our art.

“That’s how I would explain it, but people perceive things differently,” Fatahadeen told Arab News.

Their performance combines three different pieces. The first was inspired by Fatahadeen’s upbringing and life experiences, the second by Allaf’s life and the struggles he led.

The third was described as a summary of a lifetime, a way of urging people to remain optimistic.

Fatahadeen said, “We come into this life and it is chaotic. It’s overwhelming, and we’re going through it all. I just wanted to urge people not to hold on to anger and sadness and give themselves the chance to learn and grow.”

The audience swayed to the rhythm of the lyrics during the performance; some even shed tears as the emotions touched them. Allaf said having this kind of reaction was very new for him, but it also came with a lot of responsibility. He added, “I have to consider people’s reactions and I also have to understand what art and storytelling can do and the power they hold.”

“I’m just a facilitator, I’m just part of this journey. It’s truly wonderful that I was able to gift it and someone received it. I hope they will take it with them and that my words will change them in some way”.