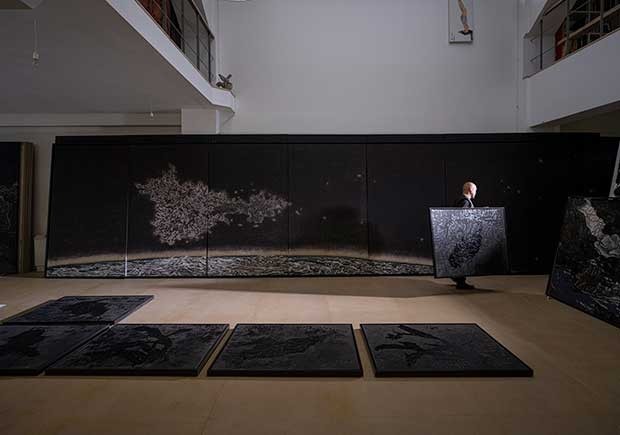 “You can see the world in a single drop of ink”, likes to say the Chinese artist Yang Jiechang. Vast, bright, his Parisian studio reflects this openness to the world. Much more than a workspace, it is a place of life, meditation, experimentation. A link between Paris and Foshan, in the province of Canton, where he was born in 1956 and grew up during the Cultural Revolution, between a father who was a leader of the Communist Party and a grandfather who was educated at the end of the Qing dynasty. (1644-1911). The old man, who lost his fortune in opium and gambling, taught him from the age of 3 to draw Chinese characters with a brush, a practice of traditional calligraphy now central to his work.

Discipline in the workshop

Between shadow and light, the artist with a shaved head, dressed in black, makes monumental works emerge from rice paper (Xuan), kneeling on the ground, with a vigorous stroke of his brush. “The technique is that there is no technique », laughs Yang Jiechang. “Not showing his skill or his personality is the highest quality in an artist of the Chinese tradition. » But to achieve this obliteration, it took him years of apprenticeship, tirelessly copying the painting of flowers and birds of the Song dynasty, exercising daily in the traditional techniques of meticulous painting in color on silk (gongbi), black ink paint (xieyi) and ink wash (shuimo) on Xuan paper. The continuous practice of calligraphy has strengthened its line and its character.

First in Aubervilliers, the artist then moved to Paris near the Saint-Martin canal in a large studio allowing him to accommodate large panels of traditional paintings. ©Manolo Mylonas/Knowledge of the Arts, 2022

Large calligraphic panels testify to this discipline in the workshop: the Taoist text Yinfujing written in seal style (the oldest form of Chinese writing) and the work Country of Movements (2019), where the artist recorded all the political movements of the People’s Republic of China in the style of the dazibaos of the Cultural Revolution. With humor, Yang Jiechang added a colored post-it: “ zero covid policy “. The former Red Guard enlisted at the age of 14 also placed a portrait of Mao Tse-tung in a bathing suit on a diving board, produced by his artist friend Chen Tong. ” A ghost laughed Yang Jiechang. 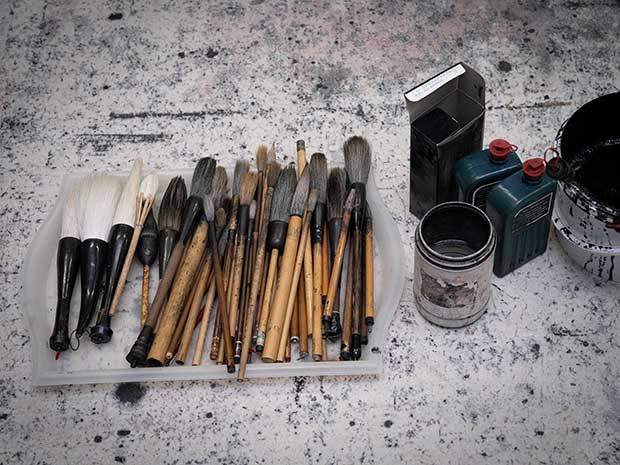 After graduating from the Chinese painting department of the Guangzhou Academy of Fine Arts in 1982, Yang Jiechang undertook a rigorous study of the Dao with the Taoist master Huang Tao. ©Manolo Mylonas/Knowledge of the Arts, 2022

The one who asks the sky

Recommended by the Chinese art historian Hou Hanru in 1988, the artist was chosen by the director of the Center Pompidou, Jean-Hubert Martin, to participate in the mythical exhibition “Magiciens de la terre” in Paris in 1989. Tired of having to paint at the Academy of Fine Arts in Canton according to the aesthetic principles of socialist realism, Yang Jiechang did not return to China. Especially since he has just met a young sinologist art historian, the German Martina Köppel, who will become his wife and the author of several texts on his work. 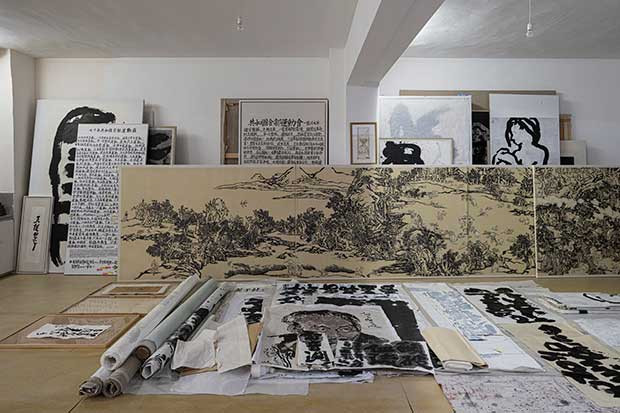 In Country of Movements (2019), Yang Jiechang recorded the political movements of the People’s Republic of China in the style of the dazibaos (wall newspapers) of the Cultural Revolution. ©Manolo Mylonas/Knowledge of the Arts, 2022

A meditative work marks this change of life: Hundred Layers of Ink (Hundred Layers of Ink), four four-foot-tall black monochromes, on which he superimposes layers of ink obtained by the distillation of cypress charcoal, essential oils, resins and extracts of medicinal plants, in homage to his missing father. Initiated in Chan Buddhism and Taoism in the 1980s, Yang Jiechang evokes in Hundred Layers of Ink the dualistic principle of Taoism (Ying and Yang) by alternating matte and shiny surfaces, which trap light. “What interests me is to transform difficult events or disasters into beauty. The spiritual aspect of the brush makes it possible to transform reality »says Yang Jiechang, who adopted the pseudonym “Jiecang”: “who asks the sky”. 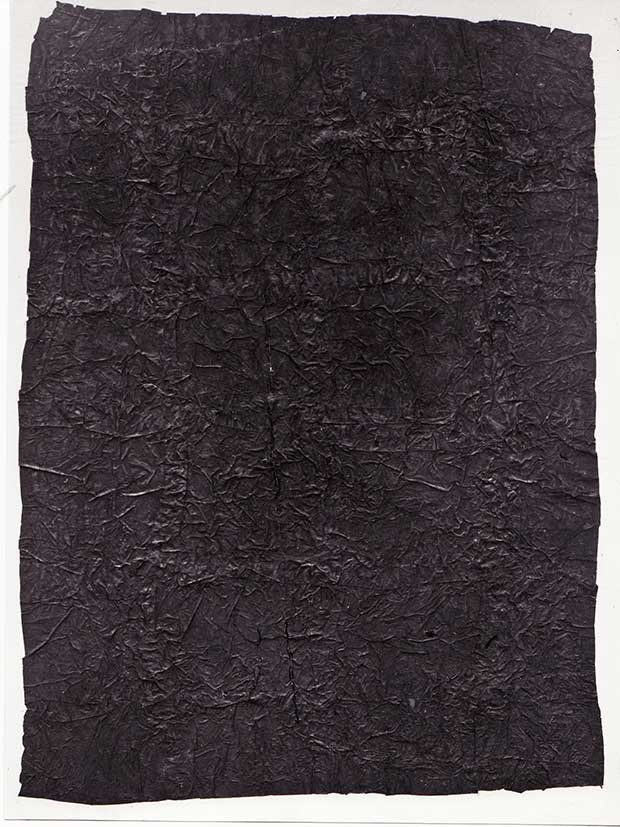 A work from the “Hundred Layers of Ink” series, On Ascension (Ascending, 1990) is exhibited in 2022 in the Chinese collections of the National Museum of Asian Arts-Guimet, in Paris, on the occasion of a Carte Blanche to the artist (from July 6 to October 24). This “aesthetics of disaster” is revealed in multiple works along the way, including the calligraphic diptych in black ink Oh My God/Oh Diu (Oh my God, 2022) recalling the cry of a young man fleeing the collapse of the twin towers in New York on September 11, 2001. 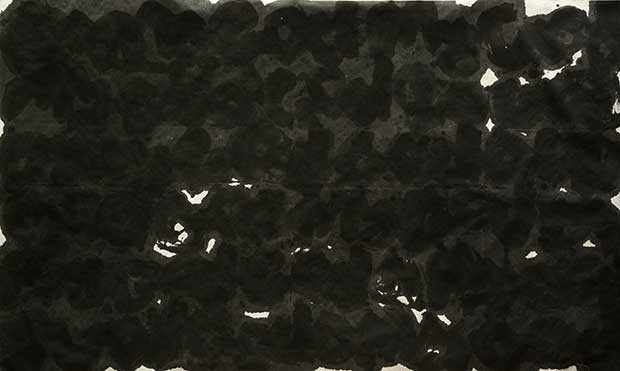 Composed of drawings on silk, skulls and human bones in blue and white porcelain, the installation Underground Flowers (underground flowers1989-2009) pays tribute to the students who died in Tian’anmen Square in Beijing in 1989. “The bones are adorned with flowers, a sign that death is the starting point of a new life, according to Taoism”, explains this contemporary scholar who refers in the title of the work to a text by the poet of the Qing dynasty, Gong Zizhen: “Falling flowers are not heartless at all. Once they turn into soil in the spring, they nourish the new flowers”. 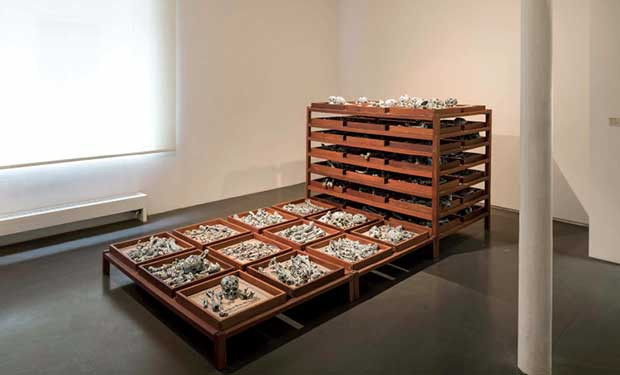 The breath of the landscape

Yang Jiechang’s workshop is the theater of this renaissance. The year 2021 was devoted to the realization of The Last Tree, a large tree on which monkeys try to grab the last leaves and touch the moon. ” An allegory of human nature “, notes Martina Koeppel-Yang, associate curator of Carte Blanche. The artist produced this work for the Guimet Museum using a meticulous painting technique gongbi, applying layer by layer of ink and color washes on silk. A meticulous practice, interspersed with archery exercises in his studio, to stretch his back.

This noble art of the Zhou dynasty, he implemented it in 2009 in a video performance in Tuscany, Landscape da Vincishooting facing the camera with, in the background, a landscape evoking that of Mona Lisa. The visual artist does not hesitate to use different media, such as porcelain in 2021, in collaboration with the Manufacture de Sèvres. Reviving a paste-on-paste technique – with relief decoration made using liquid paste stretched with a brush – it features men and animals in a Tale of the 11th day (Tale of the 11th Day) on a series of parma, pink and green vases echoing an eighteen meter long silk painting. Speaking in the rotunda of the Guimet museum “the organic breath of the landscape » (Shitao).

Launching a series of NFTs by Yang Jiechang

The specialized sales platform for NFTs laCollection.io, in partnership with the Art and Tech consulting platform Aika and the magazine “ Knowledge of the Arts », start Possible (2022), a series of NFTs (non-fungible tokens), unique digital copies linked to physical artworks by Chinese-born artist Yang Jiechang: a set of ink calligraphy on Xuan paper and canvas , composed of the words God/Oh God », « Perfect », « table tennis », « Difficult ” and ” Possible “. ” Working hand in hand with the artist is fascinating. This new series gives an unprecedented insight into Yang Jiechang’s approach – he further explores NFTs as a new medium of creation, thus reaching a new generation of collectors », explains Aimie Ferry-Sauvaire, Co-founder of Aika.

The collection of NFTs Possible will be available on theCollection.io in two times : God from October 5, 2022, and Perfect, Table tennis, Difficulty and Possible from October 12, 2022. 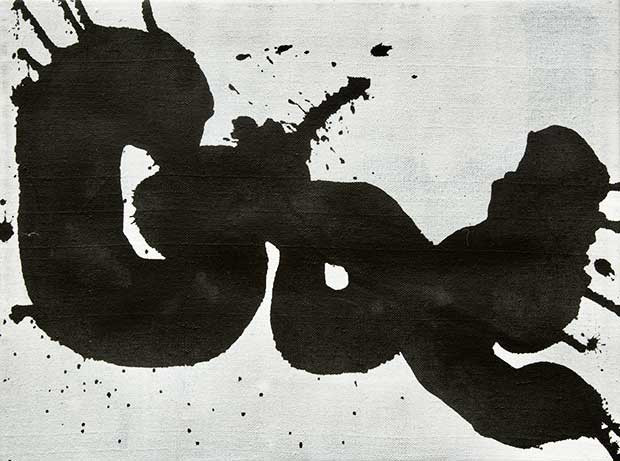