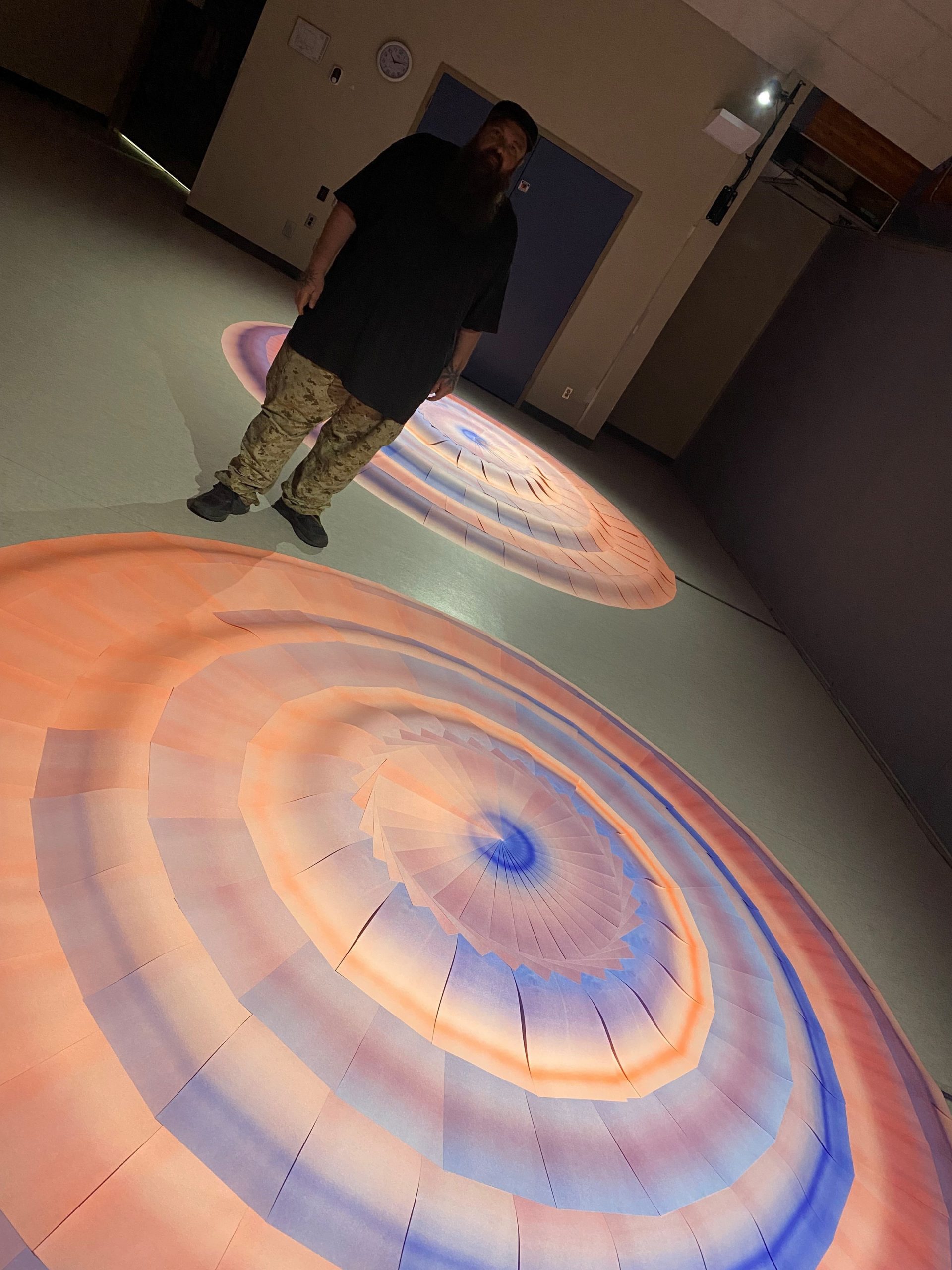 The curator of this exhibition, which has been installed for the whole week (until May 22) in various places in the city centre, Érick d’Orion, explained that a sensitivity to the elements of nature, the wind in particular, was noticed in the various works of sound art exhibited this year. The theme seems to have been adopted (without being imposed) by the majority of the invited creators, just like the meditative aspect that each of the works inspires.

The visit begins at the Charles-Édouard-Mailhot library with “L’étang de vibrations” by Marie-Douce St-Jacques. The work installed inside consists of two circles of 150 sheets printed with a risograph which form an optical effect. Hidden under these sheets (which are not glued) are speakers that broadcast voices, notes (C pure and C sharp) and electronic manipulations. Two similar works installed on the floor and two recorded tracks that are synchronized. The whole forms an inspiring and relaxing work.

The agora behind the library hosts the second work, “De face”, signed by Joël Lavoie. This is a first sound installation for the composer and sound engineer, who wants to be a study on the wind. Pierced pieces of wood have a resonator that broadcasts to speakers concealed in the space. A bench in the center welcomes the viewer, and vibrates with the wind. 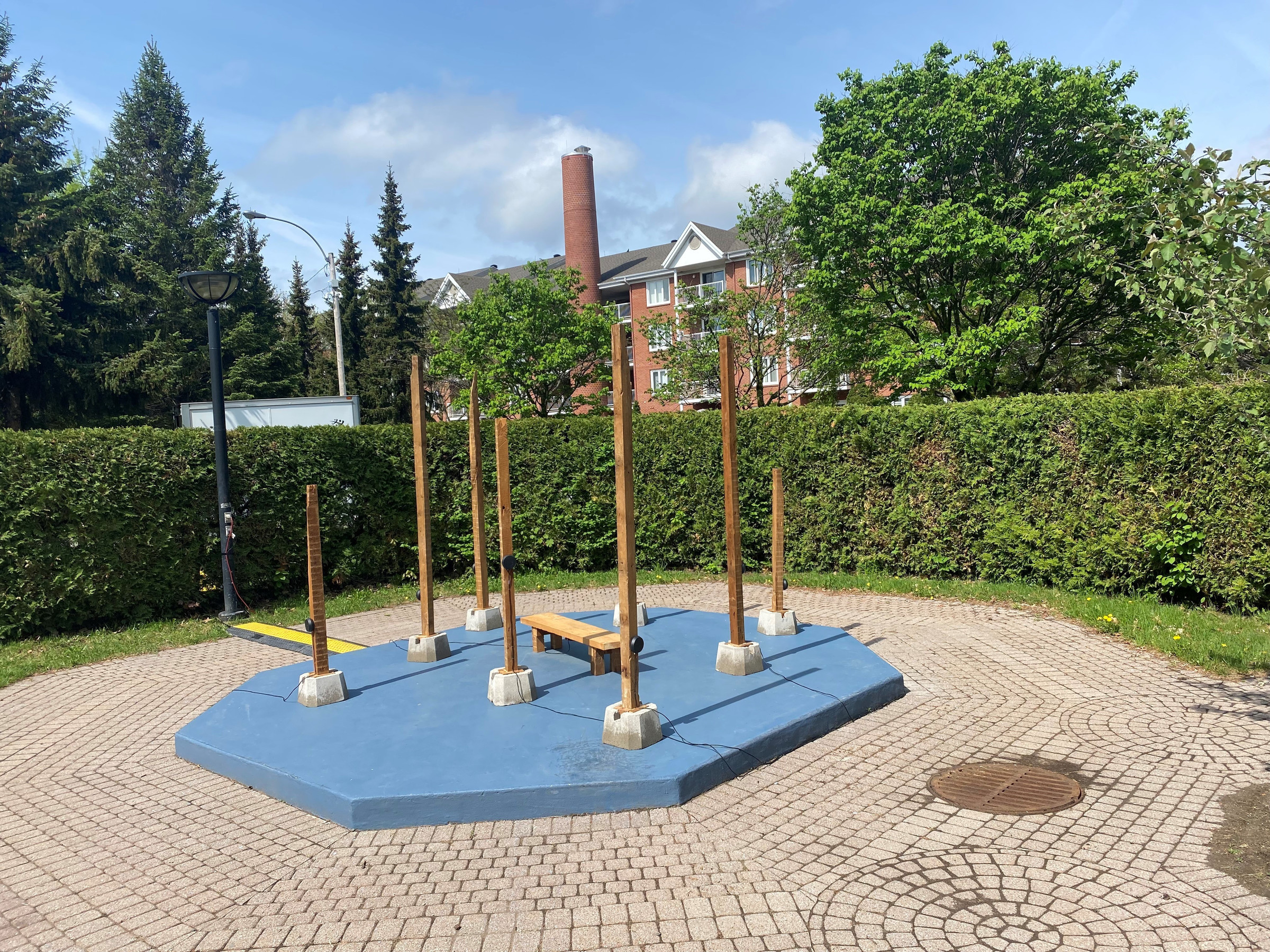 The third installation, located near the bike path, is a creation of Caroline Gagné and is entitled “Saule fragile”. This is a greenhouse in which the artist has installed an old iPhone which plays a composition made from the sounds of trees rubbing against his shed. The phone receives data from a vibration sensor and the tremors thus captured, when one sits or hits the wooden box, are transferred to the images.

Anne-F Jacques presents “Temperature” at the bandstand. This time, heater thermostats and homemade elements are installed in the sun or in the shade, creating constantly varying sequences. An orchestra of rattles (sounds of car turn signals) results. “She works a lot with salvage, with pieces that have no individual value. His work is associated with the “Do it yourself” movement, thus diverting objects from what they are supposed to do”, explains Érick.

The fifth sound installation is called “Dyschronie” and was created by Léa Boudreau and Étienne Legast. At first glance, we see nothing but the poster explaining the installation. The visitor will have to pay attention in order to hear the music, a multiphonic composition, inspired by soundscapes. This is presented by speakers hidden in space.

Rue de la Gare, for its part, offers two works by Pascale Leblanc Lavigne. Both are installed in containers, the doors of which can be closed at night. “Last year, we installed works for the first time in the street. It convinced us. It was an incredible temperature and we saw that the place was busy. With the curfew last year, no need for supervision for these works either. We wanted to take advantage of the place again, but while protecting the work of the artists,” says Érick.

“Are microwave ovens banned in Russia? » is the first work presented in the pedestrian street. We thus see eight white microwaves (on a yellow background) in which there are as many dishes of spaghetti (with a few splashes of sauce), forming a chorus of “beeps”, trays which turn and lights which light up. With humour, the artist questions the ambivalent relationship with everyday technologies with this work.

A little further on, in the container painted pink inside, we find the work entitled “Les belles tiles à ceiling”. This time, two suspended ceiling tiles leaning against the wall are worn down by two neon lights which sweep everything through with a rather rudimentary motorized movement. Over time, the material of the panels crumbles and the structure of the devices weakens, generating new shapes and sounds.

Then in the window of Gérald Musique directly on rue Notre-Dame, the work “Le songe d’artisan”, by Fortner Anderson, Geneviève Letarte, James Schidlowsky and Alexandre St-Onge, was installed. It is a machine for producing sonnets. Quotations from modern and contemporary Quebec poetry are thus assembled by software. It is therefore a poem, in continual construction, which follows the syntactic structure and the rhyme scheme of Émile Nelligan’s poem, “Rêve d’artiste”. Software reads the poem thus created and is accompanied by music that follows the same principle. “These are several tests, juxtaposed. The piece does not exist, it is being constructed”, explains the curator.

Finally, the route ends at the Center d’art Jacques-et-Michel-Auger du Carré 150. This is where Patrick Bergeron presents “Souvenirs Ébroués”. The work consists of a video projected in a frame on two screens which spin by activating a wind organ which plays a note which amplifies according to the speed of the spin. There is also a video entitled “Stereo Cassette” where the sound is linked to the movement of the image. An experience that lasts a total of 12 minutes.

Throughout the week, visitors will be able to enjoy these nine sound creations, created specifically for FIMAV.