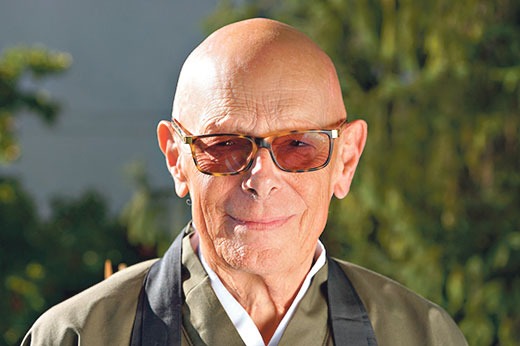 Do Zen Buddhism and quantum mechanics explore the same reality? Would their tools – meditation for the first, observation and logic for the second – lead to similar discoveries?

Elementary particle physicist and Zen monk, Vincent Keisen Vuillemin has just published Zen and quantum physics. When a monk encounters the Higgs boson. He suggests that the two approaches are at least not contradictory, and that the reciprocal distrust between science and meditation is not necessarily justified. He draws on thirty-five years of Zen practice and even more years in the service of CERN (the European laboratory for particle physics), where he participated in major discoveries such as that of the Higgs boson or the construction of the LHC (large hadron collider). He also directs the Geneva Zen Dojo, where he teaches daily.

Science and religions seem to be able to talk to each other again. What changed?

Vincent Keisen Vuillemin: The world has long been defined by Catholic hegemony; today the churches are less powerful. For its part, science has also evolved, moving away from its certainties. We still only know 5% of our Universe, there is nothing to be arrogant about. People no longer have the same relationship to dogma, they think more freely.

All religious traditions have developed different relationships with scientific knowledge. On the side of Buddhism, the current Dalai Lama has a very great interest in science and in the potential complicity between these two universes. It is not, however, a question of establishing a clear connection between the Buddhist conception of the universe and modern cosmology, each concerning a different dimension.

You nevertheless establish a parallel between the concept of emptiness specific to Buddhism and that, original, of the universe.

This original vacuity is easy to understand if we think of the big bang model, the essence of which remains unknown to us. In Buddhism, one approaches emptiness by letting thoughts fade away before they become an object of awareness. In the Buddhist vision, all being is only a form, without its own essence, while being real and impermanent. I specify that even for people who practice Zen meditation, emptiness remains difficult to imagine. It is not easy to think that we do not have our own individual reality when we notice our difference with others every day: the forms are indeed our reality, and Buddhism is not a nihilism. But recent scientific discoveries – which verify the intuitions of ancient Zen masters –, for example, facilitate the understanding of our Universe as a form arising from emptiness and in constant evolution.

In classical physics, particles of matter behave differently from waves; the world is continuous, with cause and effect relationships. Max Planck, one of the fathers of quantum physics, showed on the contrary that energy has a discontinuous structure. An entity can be at the same time wave or particle. There is therefore not a single level of reality and any duality must be overcome. I specify that quantum objects are subject to quantum laws, different from classical macroscopic laws.

Quantum mechanics and Buddhism would come together to say that there is a deeper reality than that perceived by our senses, a “veiled reality”.

Zen masters speak for example of the interdependence of the universe, all beings being connected. On a human scale, we readily consider ourselves as separate beings – which would also allow us to exercise possession over others – and independent. Now quantum mechanics has demonstrated this interdependence, this entanglement: two grains of light in an atom remain linked regardless of the distance that separates them, and any modification of one brings about an immediate change – faster than the speed of the light – in the other.

Can we really compare the intuitions of the meditating mind and the discoveries of science?

For a long time, our world was perceived as an entity governed by immutable laws that we would eventually discover. Reality therefore existed independently of us, which maintained the separation between human beings and the universe, and led to the current ecological and human disturbances. This approach has blurred intuitive or contemplative knowledge. The meditative approach, Zen in particular, is an approach to oneself but also to the world, of which we are a part since we are made of the same atoms as our observable universe. These two approaches seemed irreconcilable until quantum physics. The Western world considers as established only the objectively observable dimensions. But these verification methods are only tricks – very useful – invented by the human mind. Why couldn’t the human mind, with its intuitions, its multiple associations, make direct predictions without going through these instruments that it itself designed?

Where does our universe come from? Does Buddhism ask itself this question?

Buddha hardly addressed this issue in his teachings. He also always denied that the universe was created by a supreme being. Ancient Buddhism evokes an innumerable multitude of universes.

“You create a world of profit”

How is Buddhism different from monotheisms?

Buddhism is indeed a religion since it includes rites, founding texts, a community, a faith, but this religion is not theistic. In our Western world, it can be very difficult to believe that a high ethical will can do without transcendence. Its precepts, which vary according to the different Buddhisms, are not very different from those of other religions. “Do not kill”, in Buddhism, is to preserve life, “Do not lie”, to tell the truth. “Not stealing” implies accepting only what is given to us, etc. The faithful try to regulate their lives as much as possible on these different precepts, but there is no obligation of result: the notion of sin does not exist in this religion, nor those of forgiveness or belief. On the other hand, faith is deep there: in oneself, but also in the idea that one can change things.

What might be the implications of Buddhism for worldview?

If one does not believe that things exist by themselves, the idea of ​​possession no longer makes much sense. However, property creates separation: between people (“What is mine is not yours”), with nature, etc. From a transitory perspective, you have things but you own nothing. And you don’t have to take. In the West, we have very much separated the mind from the body, and our personal existence from the laws governing the cosmic order. For many people, the Self has an existence of its own. The danger is to become attached to this Me and all that goes with it, the social situation, the race, the physique, etc., at the risk of denying the ‘reality’ of the others. If you are attached to what you create, for example, you don’t give anything away and you create a world of profit.

Does the discipline of Zen have a world-transforming power, in your opinion?

No ideology manages to change people, in my opinion, so you have to work to change yourself. This is the wish of meditation, which passes through the body. Zen meditation places great emphasis on attitude: a noble posture should lead to a noble spirit, of high ethics. As in all religious paths, repetition is important.

The most difficult thing is to calm your mind, because the job of the brain is precisely to produce thoughts. Breathing is an effective tool. In calm, it is possible to abandon fears, obsessions, to be more open to others, to compassion. If all heads of state practiced only thirty minutes of meditation each day, I am convinced that the world would be different. Because the distance with their own Me would give them another vision of things.

On his blog, the monk and interpreter of the Dalai Lama Matthieu Ricard observes that “the main stumbling block” between Buddhism and contemporary science “remains the investigation of the nature of consciousness, a complex question among all”. According to Buddhism, consciousness is a “primary fact that is not necessarily related to the functioning of the brain, which is obviously not the opinion of the vast majority of neuroscientists”.

However, the spirit is not in arm wrestling: “The Dalai Lama has often said that if science were to irrefutably contradict certain proposals of Buddhism, they should undoubtedly be abandoned.” He thus declared that the traditional Buddhist cosmology (based on the Hindu cosmology in force in India 2500 years ago) was today “obsolete in the light of current scientific knowledge”. Matthieu Ricard is part of the Mind and Life Institute, an association that facilitates encounters between science and Buddhism. HLD

Science and religion as friendly brothers? – The mail