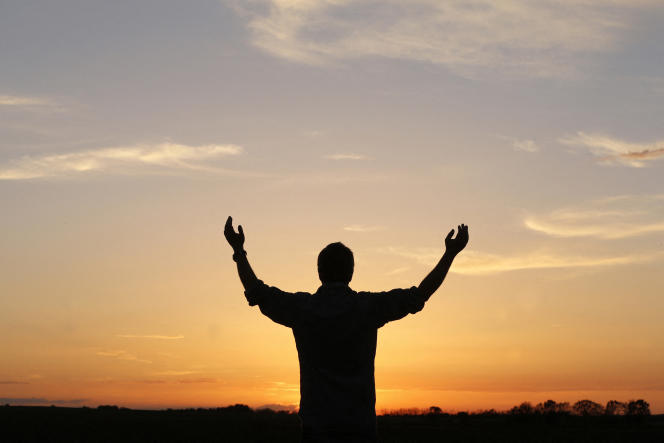 Every morning, when waking up, Wenyu prays. She repeats this ritual before going to bed. “I pray for myself, for my family or my friends. I also prayed a lot when war was declared in Ukraine”confess this Protestant violin teacher.

Praying is often experienced as an intimate moment, which is practiced alone and often takes place in the domestic space, the bedroom for example. “In the morning, I wash my face, then I start my prayer. I think that’s healthier than throwing myself at my phone and being in some kind of modern frenzy. Praying allows me to slowly return to the conscious world and to its injunctions”says Sarah, a Muslim who lives in Courbevoie.

The prayer can however also be recited, mentally or in a low voice, in public places. “I pray at home most of the time, but sometimes I also do it in the metro”testifies Xavier Accart, editor-in-chief of the Catholic magazine Pray and author of a book on ” art “ to pray (The Art of Prayer. 50 proven ways to experience God, Ed. Emmanuel, 480 pages, 24 euros).

Some rely on sacred texts, rosaries or icons. Others do it spontaneously. “I sometimes speak directly to God. Sometimes I scold him. When I pray, I express myself in a much more familiar way than in real life.”jokes Evelyne Sablé, a retired Catholic.

Pray, with or without religion

How to define prayer? This is often associated with a religion. In most cults, it is even central. Did not Jesus himself pray, according to the account of the Gospels? “So this is how you should pray,” he explains before revealing the “Our Father” (Matthew 6, 9-13). The Talmud also defines it as a biblical commandment, and prayer is one of the five pillars of Islam, to be practiced five times a day by Muslims.

Some non-believers also use it. Art therapist, Simon Lucas has developed his own approach to non-religious prayer, from which he has drawn a book (natural prayer, Librinova, 2021). “Every morning, I pray between half an hour and an hour. I also sometimes do it before bedtime if my day hasn’t been too difficult. It’s a sacred moment for me, a lot of things in my life are played out there.explains the young man.

Read also: Article reserved for our subscribers From Paris to Provence, spirituality without confession at the Sésame center

If the figures in this area are rare, Simon Lucas does not seem to be an isolated case. In 2007, a TNS-Sofres survey indicated that approximately one in two French people “pray or meditate”. Also according to this survey, 18% of those who pray do not address their prayer “to no one in particular”neither god(s), nor saint(s), nor specific figure (+ 3 points compared to 2001), a proportion which doubled (36%) among 18-24 year olds.

You have 79.8% of this article left to read. The following is for subscribers only.

“Praying is like talking to your shrink, except that if God answers you, it’s a miracle”