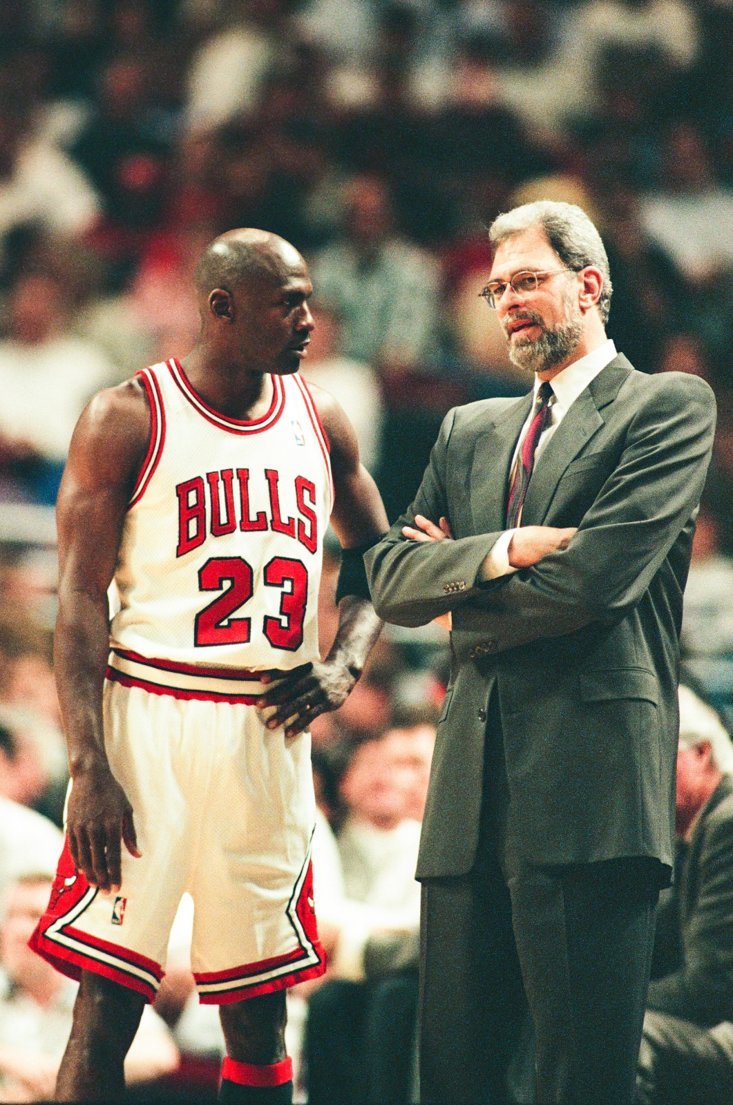 “Not only is there more than life to basketball, but there is also so much more than basketball.”

He is the coach who won the NBA championship 11 times. He is the only man to have won multiple titles with two different teams (Chicago Bulls and LA Lakers). He has the highest winning percentage of any title-winning coach who has presided over 500 games – and he has over 1,600 under his belt. Between 1991 and 2010, if you’re looking for a team that won a championship, chances are (11 out of 19 times to be exact) that was his team, and two of those seasons he wasn’t even in the game. He is one of only two coaches to have achieved the “three-peat”, a hat-trick of consecutive titles… and he has done it three times.

His return to the West Coast in 2005 allowed him to surpass legendary Red Auerbach’s record of nine titles with the Boston Celtics, a feat Jackson had matched three years earlier in 2002. Although he and the Lakers were rewarded with two more titles in that second period, if Jackson were to ever consider, even incredibly, an ounce of regret, it would be the missed opportunity of a fourth hat-trick that, in retrospect, was denied before it even started.

JACKSON ALONGSIDE MICHAEL JORDAN FOR THE CHICAGO BULLS

A final match in 2008 recalled the power of rivalry that marked the decade of the 80s, with the preparation inevitably bringing out the old card to unleash the hype. However, he ultimately didn’t get a chance to start what would no doubt have been a frankly deifying fourth game, when in 2008 Doc Rivers’ Boston Celtics won 4-2 in the Finals for the first. Eastern Conference championship in 22 years, since the hallowed days of the Celtics/Lakers, Bird/Magic era.

Jackson’s legacy is, of course, imprinted on two of the most famous sports franchises on the planet, the Chicago Bulls and the Los Angeles Lakers.

The Lakers already had an illustrious history, through the eras of Wilt “The Stilt” Chamberlain, Kareem Abdul-Jabbar and Magic Johnson. Chicago was another story. The six titles in seven years, composed of two hat-tricks separated by a single year, in a club where he will concede having had the chance to have the weapon of the greatest basketball player of all time, Michael Jordan.

Most coaches would consider themselves lucky to have just one superstar. But when he arrived in California, he had the Black Mamba himself, Kobe Bryant.

On June 12, 2002, he scored the hat-trick for the third and final time, as the Los Angeles Lakers swept the New Jersey Nets 4–0 in the NBA Finals, with Shaquille O’Neal named MVP.

The son of a Pentecostal pastor couple, Jackson was born in Montana in 1945. His athletic prowess during his high school years earned him a basketball scholarship to the University of North Dakota. He was drafted into the NBA in 1967 by the New York Knicks, where he won two league titles. But it’s the image of Jackson the coach, yelling from the sideline and calling the most important timeouts, giving instructions and ringing the knife for team changes, then lifting the Larry O’Brien trophy, adapted, again, and again, and again. That’s why his autobiography is called Eleven Rings. In a century, this will be his legacy.

And although he enjoyed success while playing, it was his college education that was instrumental in the glory he achieved as a coach. At UND, he researched and began to use elements of Christian mysticism, Native American rituals, and Zen meditation. He is the so-called “Zen master”, whose contemplations and deep ideology on the power of sport as an almost mystical entity guided his success over a solid two-decade span that ultimately led him unequaled. Jackson didn’t just teach these hulking Samsons how to play, he also taught them how to stay still, practicing stillness, mindfulness and meditation. 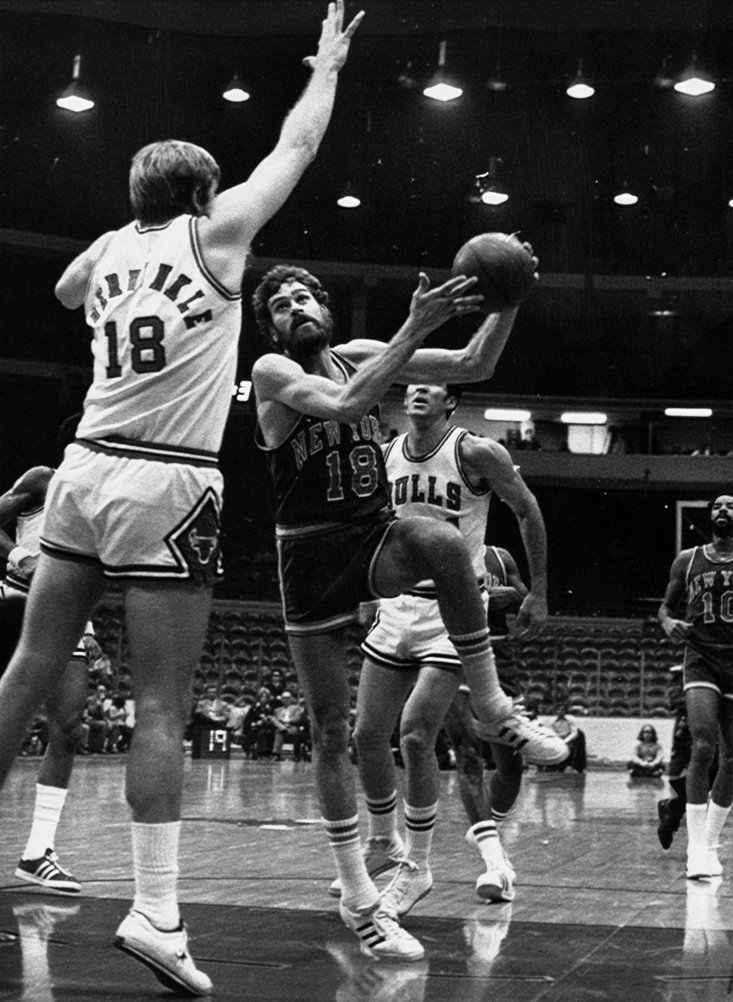 JACKSON WHEN PLAYING WITH THE KNICKS

It is a philosophy that influenced his teams each time they had to return to the center of the field.

“It’s such a big community you have when you play this sport, especially if you get to play it at a high level,” he continued, “That’s where the esprit de corps comes from. ; that there is this spirit among this connected group, a connected group of people”.

This spirituality is not about religion, it is about being able to incorporate other beings into your plans, into your system, and my better nature is uplifting their nature as well.

“And basketball and sports do that, even as watchers, as spectators. Let’s say there is a remarkable piece, we want to see it again and again because it brings us an elevated spirit. It is not just an individual action.”

There was one particular occasion, however, where the zen went out the window, and it wasn’t due to the actions of any particular player, but actors Matt Damon and Mark Wahlberg.

For Game 5 of the 2008 series, with the score 3-1 in favor of the Celtics, The Departed co-stars and Boston locals had tickets to the field, one breath away from seeing Jackson at the ‘artwork.

“It was in LA, but the game before [Game 4] we had been trailing by 23 points in the third quarter, and we had come back and won,” Damon explained candidly to Bill Simmons of The Ringer in 2019, “So this game, we trailed, they’re home – the Lakers, I mean – and we trail by 21, 22 points in the third quarter and Paul Pierce goes into “Truth” mode and just goes crazy. And they had this amazing comeback.

“Our agent has four seats on the floor and [Mark] Wahlberg and I asked for two each – there were four of us and we were screaming, you know. We were cheering on the Celtics, like you do, and their run was capped off, I think, by Pierce sneaking down the hall and putting the ball in the basket to complete the comeback. By the time he rushes to put the ball, Phil is already on his feet because he asks for a time out to stop the bleeding. 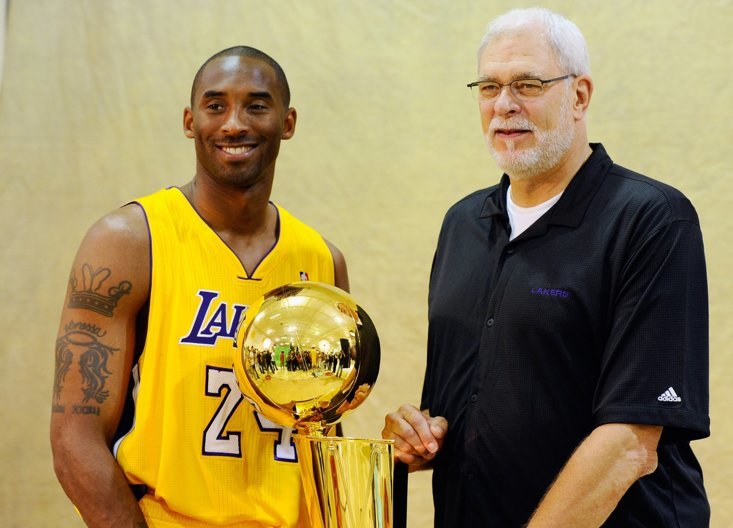 “And Wahlberg and I are like ‘Oh my God!’ and as he calls time out, he just turns on us and goes, ‘Sit down and shut the fuck up!’.

“He was so angry. What I understand. I can’t imagine I’m having a bad day at work, and there are people cheering on my pain.

“But we were like, ‘How does the Zen thing work for you?’”

The Lakers would actually go ahead and win the game 103-98, but with the playoffs sent back to Boston, Game 6 would finally put the title in the hands of the Celtics.

The heartache would not last, as Jackson’s Lakers would win the next two titles, with a 2009 victory over the Orlando Magic and a rematch over Rivers and the Greens the following year. Although another hat-trick was not achieved, Jackson had helped lift Bryant almost to MJ’s echelon. Importantly, for Kobe, those last two wins with Jackson put an end to the taunts of former Lakers teammate Shaquille O’Neal, alongside whom he won those triple rings in the early 90s. The Big Aristotle bragging in a nightclub freestyle that “Kobe couldn’t do it without me,” in footage that emerged in the wake of the Celtics’ misery in 2008. Jackson and Bryant ultimately denied the idea.

There have been other magnificent men on the court who have come under Jackson’s tutelage: Steve Kerr, Scottie Pippen, Derek Fisher, Shaquille O’Neal, Lamar Odom, Pau Gasol and Dennis Rodman, among others.

He left the Lakers and retired from coaching in 2011, his triumphs unlikely to be matched for generations. Jackson is indebted to a particular prayer that he recites regularly:

“You are the support of our bodies, our hearts and our souls”.

“Bless all that we receive with gratitude.”

Phil Jackson received more than most. But no coach has ever put so much heart and soul into making it happen.

Phil Jackson, the NBA’s Zen Master and Greatest Coach of All Time