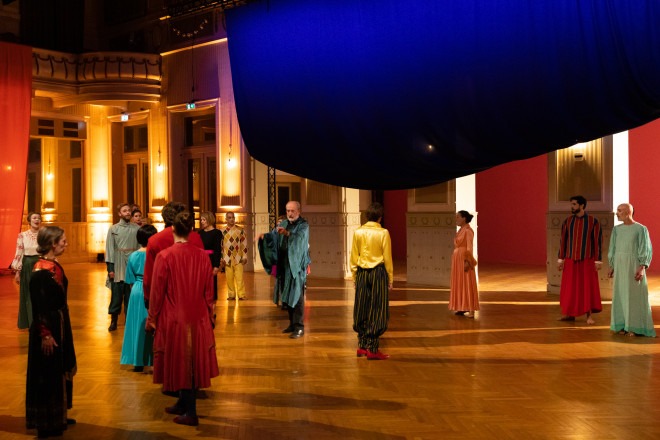 The creation of the show “Friede auf Erden” (Peace on Earth, named after a choir composed by Schoenberg) brings together the Arnold Schoenberg Choir under the direction of Erwin Ortner and the artist Ulla von Brandenburg as part of the Weeks of Viennese Festivities (Wiener Festwochen), offering a synesthetic, dreamy and peaceful experience.

This particular event takes place in a place that is no less so. The artist Ulla von Brandenburg (nominated for the Marcel-Duchamp Prize in 2016) invests the spatial generosity of the Jugendstiltheater am Steinhof, a former psychiatric center of dark history and memory, as the setting for her dramaturgical concept bringing together the colors and music of Schönberg. The classic layout of the concert hall is undone, to turn the face-to-face between audience and artists 90°. The use of large fabrics, very characteristic of this visual artist, blends harmoniously with the strict elegance of yesteryear.

The actors (the playwright of the show Benoît Résillot, Sabrina Baldassarra, Duncan Evennou and Giuseppe Molino), the members of the Choir Arnold Schoenberg and their director Erwin Ortner are dressed like “actors” from the old days of building activity (anachronistically projected in our time). The contrasting and poetic lighting of Georg Veit sometimes protects the illusory break between the artists and the spectators, sometimes exposes them in moments of deep meditation. All these scenic arrangements tend towards a finality: the synesthetic relationship between the music and the visual. At the heart of the program, a selection of Schönberg’s works cover his romantic and atonal periods, the bright colors of the decorative fabrics representing the alternating cycles of contemplation (dark purple), joy (yellow), and ultimately peace (dark blue) and worry (red, orange).

The Arnold Schoenberg Choir under the direction of Erwin Ortner unfolds the sense of unity, articulations, textures and emotional nuances of each phase. The sound concentration of the female desks meets the solid resonance of the voices of the men in their exchanges on the ritualized entry for the first fragment of the Drei Volksliedsätze (Three popular songs) plunging into the imagination of the old choral style. Textures and nuances are clearly and effectively noticed in the alternation and exchanges between song and declamation, between the voices of women and men in the Psalm 130. The rises are gradual and then burst with absolute mastery, so that the syncopations maintain their rounded and balanced resonance. This also focuses on the meditative atmosphere, and the exchanges with the soloists are no less expressive: the declamatory firmness then takes on a pronounced sense of humor, sometimes bordering on the grating (widely appreciated by the audience).

The soloists of the evening are also noticed. Ursula Langmayr (soprano), shines with a crystalline and dense timbre by the brilliance of her breakthroughs, alternating with the velvety density of the controlled voice. Johanna Krokovay (alto), with a velvety timbre with metallic resonances in the high register, masters the textural richness and nuances in the transitions between registers. The melodious density becomes dark and imposing or even mocking but playful. Tore Tom Denys offers a tenor with a warm timbre and controlled ease, exploring the undulations between registers with great agility, proud and powerful for the peaks (especially in the dazzling momentum, covered and concentrated in the controlled descents). Marcell Attila Krokovay (bass) offers an important anchor to his colleagues by his sober and dark timbre, which however hardly omits scintillating and expressive nuances in the syncopated passages.

The concluding piece of the evening, Friede auf Erden (Peace on Earth) offers an end to the very particular resonance, meditative and concentrated, even spiritual, in relaxation, distancing and dispersion of sound, always in the awareness of the particular acoustics of the room and the circular and meandering movements of the choir which traces its own constellation .

The last echoes of the music (and the audience’s applause) evaporate and the lights go out on this ephemeral flight towards peace and harmony.