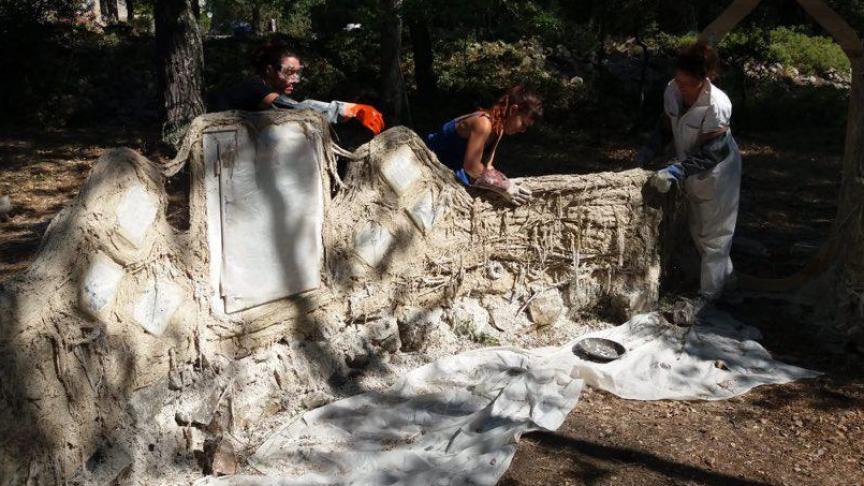 
Two years ago, we met Éloïse Callewaert, in full confinement, driven by the desire to offer her city a third place. She then hoped to invest in a wasteland of the urban community, to build lime-hemp domes there and develop an experimental eco-district or a living laboratory. Terra-Terre sought to take root. But after presenting to an elected representative from Arrage last year, she realized that ” we don’t have the same agenda “, agrees the interested party, confronted with the long political time “ while I was in the starting blocks “.

This is where his need to take action in the face of climate catastrophe took on a new twist. ” I had opportunities with individuals, I decided to go where people were ready. With ecolieux, in Troyes or Saint-Malo, the artist who had followed a formation in Brittany implements the creation of new spaces. ” It can be accommodation, but also a place of resource, meditation, a cabinet, a grain library… »

Her activity with Living in the world differently, innovative although still confidential, pushes her on the roads of France and sometimes also in Arrageois. With the biennial Appel d’air, she invited high school students from Gambetta to build lime-hemp nesting boxes; last week with the AUC, she did it again during workshops in Rœux, given as part of the ecological agenda.

The technique, not innovative in itself, could also reinforce the thermal insulation of houses, especially since ” we are moving towards major ecological transition projects “. Renovating an old wall, shaping dividing walls but also, “ to join the beautiful to the useful through the style of organic architecture “, create a work plan, shelves or even wall niches. ” Everything is handmade and it is artistic. With simple materials, we can do this with family, friends, dive for a few days in a common workshop… The project is to make people capable. »

For Éloïse Callewaert, who claims more of the social and solidarity economy than the start-up, ” our own habitat can be a gateway to take an interest in the habitability of our planet “.

Monchy-Breton: a long procession of torches in search of Marie-Grauette

Claude Prévot, eminent personality of Bapaume, is no longer

Arras: “To combine the beautiful with the useful”, Éloïse Callewaert makes a place for lime-hemp in the habitat of tomorrow