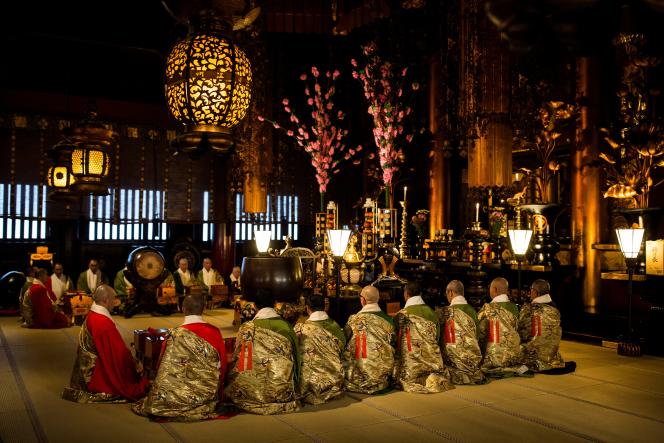 On September 15, 2021, Clément Sans became a Zen monk. Ordained under the name of Tozan (“the mountain of peaches”), the young Frenchman is now attached to a temple in Japan. Each month, he sends us a letter that shares with us his singular and almost timeless daily life, punctuated by long hours of meditation, work in the fields and the reading of sacred texts.

Letter of May 2022. The mountains of the big island of Honshu are now all draped in a large green cap of infinite shades, the trees seem to be in love with a new vigor, the azaleas rub shoulders with the first hydrangeas. The whole Archipelago breathes a spring emerging from the blossoming of the cherry trees. In our mountains where water abounds, the frogs have returned to accompany our nocturnal meditations with their songs, a sort of natural liturgy for a season already well under way.

The last winter vegetables having been eaten and the first harvests of the year taking a long time to come, spring is for us the season of sansaithose edible herbs that cover the mountains of rural Japan. Warabi, stems of fuki, leaves of mitsuba… a whole orchestra of wild plants found in the forests surrounding the temple now make up the daily menu. Most often prepared by frying or added to the essential miso soup, these herbs will be the mainstay of our diet for several weeks.

Read also: Article reserved for our subscribers A Zen look at the world: “Making your monk’s robe, an asceticism through sewing”

But this beautiful season is above all the one when the rice, previously planted in greenhouses, is transplanted. The rice fields were prepared, fertilized, covered with water, drained and leveled. Then, on a sunny day, we canceled our meditation sessions to devote ourselves only to rice, put in the ground by hand. A whole day, from dawn to sunset, was necessary to overcome the two rice fields, which will give in the best case about 600 kilos of rice. From now on, the almost daily care of the rice occupies a large part of our time and everyone watches over the young plants as a worried parent would watch over a feverish child.

This month, however, I slipped away from the temple to join this former imperial capital that I love so much, Kyoto, the city where I officially got married, while waiting for the more formal religious ceremony. In ancient Buddhism, celibacy was imposed on monks, who were first defined as renunciants, “out of the home” (shukka, in Japanese). Far from its Indian origin, Japanese Buddhism has slowly secularized and transformed to merge with ordinary culture, adopting codes prior to its arrival on the Archipelago.

You have 49.76% of this article left to read. The following is for subscribers only.

A Zen look at the world: “Marriage is an opportunity to extend the spiritual domain in the ordinary world”