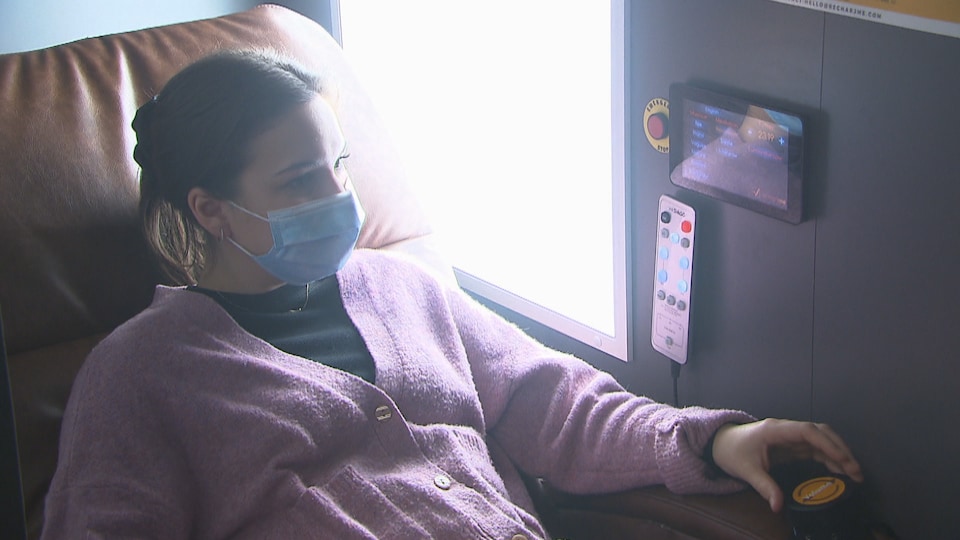 This resting place at the Sept-Îles hospital, created by the Recharjme company, is accessible free of charge to all employees of the Côte-Nord Integrated Health and Social Services Center (CISSS).

The workers of CISSS nord-côtier can reserve the cabin at any time for periods of 25 minutes.

Light therapy is one of the functions offered by the Recharjme cabin.

[Dans cette cabine], it is possible to only take a nap, but you can also have massages. There is also light therapy, assisted meditation and musicexplains the director of liaison and project management at the Sept-Îles Hospital Foundation, Cindy Basso.

” Inside the cabin, we choose a little what we need, then we can take a break in peace, in a suitable closed climate. »

A Quebec concept created in 2018

The founder of Recharjme, Éric Normandeau, says he got the idea for the relaxation cabin concept during a discussion with his wife. She had mentioned that she would have given anything to take a nap at her workplace, he says.

I found that the idea of ​​a nap, in the middle of a day, was a way to reboot the body. My spouse came back one day with this idea. I told him it would be nice to have places like that in workplacesrecalls Éric Normandeau.

Éric Normandeau is the founder of Recharjme.

The company was born in 2018. Today there are about forty of its relaxation spaces in Quebec and two in Ontario, according to the founder.

Recharjme counts approximately 2000 reservations per week among all the cabins it rents. The annual cost of renting a relaxation cabin for a company is around $10,000, according to the company.

The Recharjme cabin at the Sept-Îles hospital is located near the staff entrance.

If the Sept-Îles Hospital Foundation obtains the necessary funding, it could open a second cabin in the coming years, says Cindy Basso.

She also specifies that the Foundation will observe the attendance rates of the first booth before opening a second one.

A second cabin [pourrait permettre] that all employees have quick access to technology. The first cabin is near the hospital staff entrance, it is still accessible. But, it may be a bit far for people, for example, who could work at the Gustave-Gauvreau residence or at the CHLSCnotes Cindy Basso.

The Quebec company Recharjme also hopes to be able to open other cabins internationally, including in the United States in 2024.

A Recharjme relaxation cabin at the Sept-Îles hospital