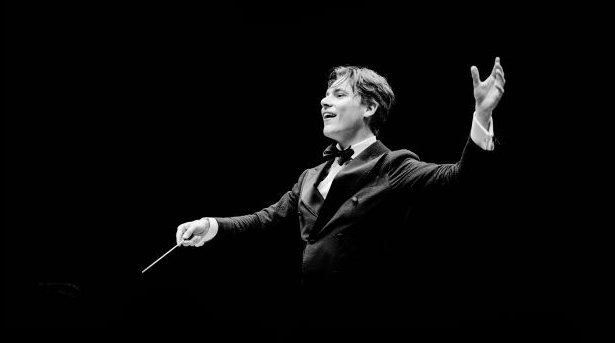 MAHLER’S NINE SYMPHONIES form a gigantic monument where the musician seems to draw a new cosmogony each time. At the same time philosophical thought, exacerbation of affect, narration with contrasting episodes, taste for effect and celebration of nature, but also: meditation on the world, with its telluric forces, its conflicts, its ephemeral landscapes idyllic, its abysses. The Mahlerian symphony thus seems invested with a double mission: to deploy with the maximum of eloquence and expressiveness a polyphony which would take into account the density of the personal universe of the composer and to propose a superhuman message, which is not elsewhere not necessarily comforting. The two fields of inspiration which are for Mahler the lied and the symphony are closely intertwined throughout his production. The first four symphonies are more or less consistently associated with the lieder, in particular the lieder of the knabenwunderhorn (The Child’s Enchanted Horn).

Between romantic fresco and fascination for original alloys of timbres, between pure music and strong sentimental references, the Mahlerian world is the scene of all kinds of oppositions, which is ideally illustrated by the Symphony No. 3 – between landscape art and reference to a sometimes idyllic, sometimes murderous nature… About this symphony, of extremely ambitious conception, Mahler wrote to a friend: “The fact that I call it Symphony does not mean much, because it has nothing in common with the usual form. The term “symphony” means for me: to build a world with all the existing technical means. ” Thus sensing that this symphony will constitute in his work the most colossal monument but also the most representative of the totality of his musical conception, he projects to entitle it “Pan, symphonic poem”, Pan being at the same time the divinity most radiant of nature and the very name of totality (pan means in Greek: everything). Mahler then considers a Nietzschean title, The cheerful knowledge, with the subtitle “Dream of a Summer Morning”.

But it was only in 1896 that the first movement was composed, by far the longest of the symphony (nearly half an hour!), and the most clearly devoted to the celebration of nature. “It’s almost no longer music, writes Mahler, it’s just the sounds of nature. At the beginning, one shivers in front of this immobile and soulless material (I had thought of entitling this piece: what makes me happy with the rocks). However, thereafter, life gradually regains the upper hand and, step by step, it develops and differentiates itself up to the higher forms of evolution: flowers, animals, and men, we arrives in the realm of the spirit and that of the angels. In the introduction reigns all the brutal ardor of noon, during the summer, when all life is restrained and no breath agitates the air, which vibrates and blazes, drunk with the sun. It is then that life, still motionless and inanimate, prisoner of nature, groans in the distance, begging to be finally freed. In the first movement which begins immediately, she will win the victory. »

Even beyond the explicit images that nourish and found Mahler’s inspiration, this symphony is a real work on sound material, more accomplished perhaps than anywhere else in his orchestral work. Firstly because of its length, the Third of course offers a very wide range of musical means. As if Mahler gave himself, through this work, the opportunity to explore, one by one, all sorts of compositional processes which, in fact, become extremely rich expressive tools. Thus, for example, the presence of singing in this symphony is evident by the use of voices in the 4th and 5th movements (contralto and choirs) but it also runs through, in a much more essential way, the orchestral material, offering a whole ensemble of cantilenas, all the more soloists, if one dares to say, that the orchestral force which supports them is strange and dense. One often has the impression, listening to this work, particularly in the 1st and 6th movements, that the “narrative” themes, the quasi-belcantist motifs, the recitative sequences, sound with extreme transparency, precisely because the work on the orchestral mass is almost comparable to an impressionist technique, that is to say the radical opposite of singing. We perceive it very well in the moments of iridescence, of scintillation – alto trills with mute playing triple piano, in the first movement, against a background of flutes by four in sustained notes, to which the harps are added. All of this is far from the idea that one can have, when one is unfamiliar with Mahler’s music, of the “colossal” in the German style…We are much more, on the contrary, on the side of the art of a Debussy. And the presence of the song, of these narrative themes in this frame appears in a way like a figurative motif in an abstract painting.

From all these points of view, the interpretation of the Symphony No. 3 by the Oslo Philharmonic Orchestra conducted by Klaus Mäkelä at the Philharmonie de Paris was remarkable in its handling of all the spectacular issues of the work, while raising questions about the more secret dimensions of Mahler’s project. For the young conductor Klaus Mäkelä, it is easy to imagine what such a symphonic monument could represent, with the scale of its proportions, the extreme richness of its sound palette, the very open range of its psychological and even philosophical characteristics, if not what by the splendor and the mystery that opens the symphonic song of the 4th movement, on one of the strangest texts ofThus spake Zarathustra of Nietzsche. Was it necessary to highlight all the most explicit characteristics of this music at this point (violence, force, chaos supremely organized by the composer, effects, twists, contrasts), thus risking (and this is what happened, in my opinion) to tilt the symphony towards an initially expressionist landscape, with all that that implies in terms of the force of the line. And making more impressionistic sequences, which are numerous in the work, moments of contemplative pause in a scenario conceived first as a conflict, unraveling in the finale (infinitely long under the composer’s pen, as if to say the end impossible or, on the contrary, the desire for eternity).

It seems to me that this symphony, by its very substance and its orchestral writing presents the interpreter with a formidable danger: is it a question of hearing and making heard everything that stands out, savoring all the possibilities by deploying a landscape at first contrasted, spectacular, tending towards the twist and the appearance of the unexpected, at the risk of missing out on all the much more enigmatic dimension of this music, more difficult to access and almost veiled by the orchestral science of the composer? The excellent Oslo Philharmonic Orchestra responded with marvelous naturalness to the direction of Klaus Mäkelä, who is its titular conductor. The direction of the latter, sharp, percussive, full of fire, found a perfectly convincing and captivating echo in the beauty and precision of the winds, in particular, but also the very beautiful texture of the strings. Soloist gestures and ensemble movements, as one would say of a choreographic company, seemed to go without saying, with a naturalness and a force of conviction which are, after all, what one expects most important from an orchestra. and its leader. Jennifer Johnston, who interpreted the poignant song of the 4th movement, did so with a depth and a gentleness that won over the public at the Philharmonie. The women’s choir of the Orchester de Paris and the Children’s Choir of Oslo were also perfect. Mahler, however, is he entirely in this obviousness, this transparency? It seems to me not.

A 3rd of Mahler in full brilliance