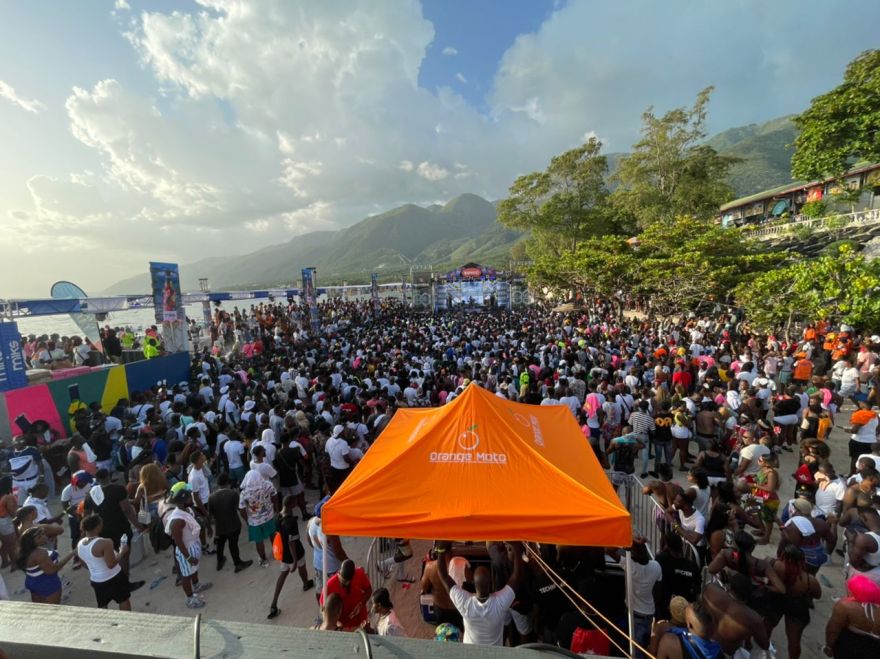 Sumfest: between conscience and rejoicing, the Haitian people have made their choice.

Looks like all was well in the Haitian capital on July 31 during the annual festival Sumfest which took place for the fourth time without any incident. Looks like all the problems were solved in the country. The Côte des Arcadins was the place of attraction for Haitians who wanted to rejoice when several weeks ago, the road that leads to this place was a bit deserted and caused a terrible fear among the population because of the presence of armed gangs in Canaan where armed individuals rule the roost and terrorize the inhabitants.
The war of armed groups Chen Mechan and 400 Mawozo has caused dozens of deaths in the commune of Croix-des-Bouquets and its surrounding areas in recent weeks, forcing some citizens to leave the area to take refuge in other places more or less. less calm. Until now, people are still in great difficulty to move freely. Families have lost loved ones because of this war. Several inhabitants of this town, now considered a lawless zone, live with the consequences of this war.

Same situation in the town of Cité Soleil where armed groups from this working-class district and those from lower Delmas have started a merciless war since the beginning of July which has caused the death of several dozen citizens. Others had time to escape to settle in other areas. More than 300 children have also deserted the town. Several of them are currently in Saint-Louis de Gonzague and do not even know when they will be able to return home and find their home.
Despite all these problems facing the country and which make the headlines on a daily basis, when it comes to partying, everything is temporarily back in order.

The artists had mobilized to offer the participants performances that lived up to the expectations of this jubilant public, thirsty for pleasure. This same group of artists has often left the national territory to settle in neighboring land because of insecurity. But, the fourth edition of the festival so appreciated by the Haitians pushed them to make a common front to make this activity a success. Reproaches have been made on social networks towards some groups or artists who have never taken a position openly against the socio-political situation of the country while they have always responded when it comes to partying.

It is in the same vein that Mathe Vladimir Stefano, a young political consultant, believes that the population has a duty to mobilize. However, he believes that this approach is possible if the people are truly aware of the difficulties they face. Mathe Vladimir Stefano also pointed out that this awareness could lead to a series of ordered demands.

Haiti is in a coma. The lines hardly move. Security conditions have not changed. The whole city is under the obedience of armed men who dictate their law, kill and rape. Disenchanted, the citizens say they want to breathe, sigh in the hope of stopping the bleeding, depression in the face of insecurity and crime. “How do you plan to go to Sumfest and then not be able to go home because you will be killed, kidnapped, robbed or shot…” These comments have often made the rounds on social networks. Did the public brave the danger to rejoice without caring about this crisis?

In a country where eating becomes a luxury while the majority of the population living below the poverty line does not demand anything, the majority of artists have not taken any position openly, members of the population have chosen to partying at festivals, balls, “Atè Plat” programs. We have the impression that the country is doing well, everything is back to normal.

Meanwhile, a spice merchant was kidnapped in Martissant on July 28. Journalist Edner Fils Décime has been in the hands of his captors for over a fortnight. Members of the FAZZ group were kidnapped in Bassin Bleu, not to mention other victims of the kidnapping. Recently dozens of citizens were injured or killed by stray bullets during clashes between armed gangs in downtown Port-au-Prince, the transitional cathedral of Port-au-Prince was burned during these clashes. The population is on the alert in the face of inflation. It means nothing to a people who are contemplating their own misery.

The PNH with its meager means made efforts to counter the actions of armed bandits in order to allow the population to breathe and go about its activities freely. The police institution has made major blows in recent days by seizing weapons and ammunition at customs in Port-de-Paix and Port-au-Prince. Several individuals were apprehended and others were killed during the exchange of fire. Operations were carried out in neighborhoods to dismantle gang networks. Despite all this, much remains to be done for this institution that is often criticized by citizens.

Mexico: 10-year-old girl admitted to the University of Massachusetts to study medicine

Sumfest: between conscience and rejoicing, the people have made their choice – Juno7