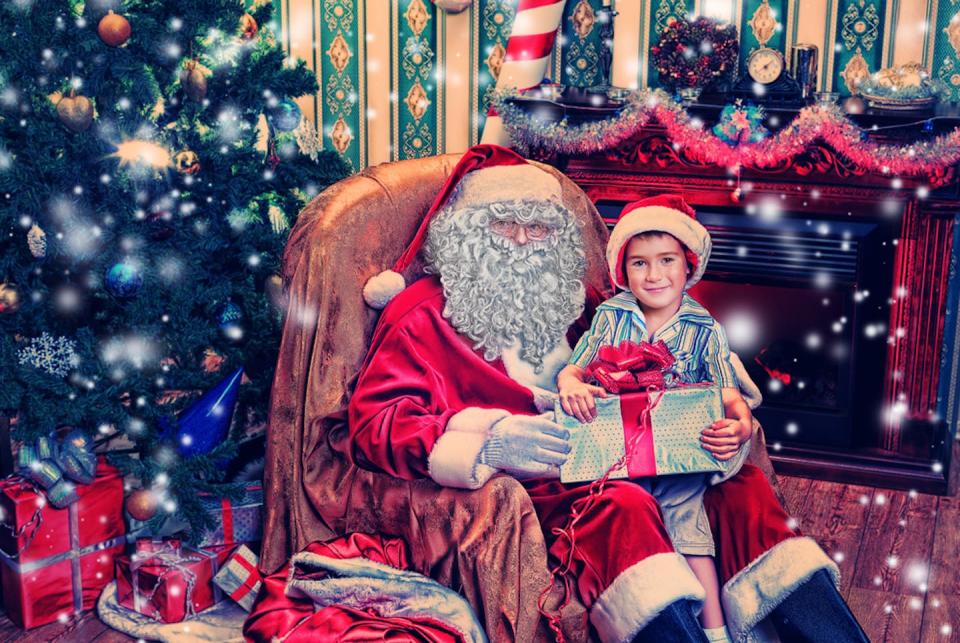 Should we let our children believe in Santa Claus or would it be more prudent to explain to them, from an early age, that such a character does not exist ?

This is a question to which many parents will certainly find relevant answers in the writings of the pediatric psychology. Adopting, however, the perspective of thecultural anthropology, my question is a bit different. I wonder why we all agree, one day or another, to become accomplices in this mystery about the reality of Santa Clausthat we see it as a American soft power fictional character or rather as an icon of Christian feasts of the Nativity.

Two sub-questions should be formulated. The first concerns the need that we Westerners have to embody the religious spirit of Christmas in the form of a costumed old man rather than retaining its original mythical essence. And the second concerns our even more naive desire to sublimate the image of this folkloric character by pretending not to notice his misbehavior when he gives himself the moral license to do so, especially in films or children’s songs.

In academic perspective and based on my interests in popular culture and its construction in a capitalist context, I refer mainly to the writings of the philosopher Jean-Jacques Wunenburgeran eminent specialist in the image and the sacred, to address this theme of ambivalence that characterizes our experience of Santa Claus.

The infantile experience of the “numinous”

What Wunenburger teaches us first is that the sacred fundamentally has a paradoxical status. That is to say that insofar as it sets a threshold between the natural and the supernatural, the sacred constitutes both a “prohibition not to transgress” and an “invitation to infringe the limits”, in particular those of the materiality of the world. Faced with this paradox, it is normal to be prey to ambivalent feelings: on the one hand, we feel a “panic fear in front of the immeasurable size of the unknown”; and on the other, an “irresistible attraction towards something higher, marvelous and solemn”. This is what the theologian Rudoplf Otto called the experience of numinous.

That’s probably how our kids feel when we parents sit them on the lap of an unfamiliar Santa Claus in the middle of a mall. By this gesture, we subject them to this type of experience by allowing a great confusion of feelings to be maintained in them. On the one hand, they will experience a terrible fear towards this flamboyant stranger who grips them; and, on the other hand, they will nourish this ardent hope to which we cling to them by dangling pretty presents that are usually inaccessible.

Sacralize our experience of the profane

Also, for the strange guy to be more than a picture in a coloring book, we need to put in place strategies aimed at instituting its sanctity. As Wunenburger instructs us, it is therefore a question of structuring our experience “by symbol, myth and rite”.

Among the Christmas rites most practiced in the industrial metropolises, there is that which consists in attending, with the children on the shoulders, a long parade of allegorical floats at the end of which the appearance of Santa Claus generally produces the expected excitement. . Other more intimate rites consist, for example, in leaving clues of Santa’s visit to our homes, whether by arranging nibbled cookies, half-drunk glasses of milk or gifts under the tree, all at the unbeknownst to sleeping children.

In order to give Santa Claus his sacred character, the creators of the capitalist holiday have also generated the myths so as to grant him magical powers, secret knowledge and marvelous privileges.

As for the symbols of the sacredness of Santa Claus, we have borrowed them from the religious domain. These include in particular the bishop’s crosierof the pom pom hair clip and the purple color worn by the cardinalsa flamboyant red symbolizing the power, prestige and authority of these high dignitaries of the Catholic Church.

Profaning our experience of the sacred

In its taste for paradox, the entertainment industry is not afraid, moreover, to debase the image of its Santa Claus by producing works that expose certain flaws. In the scene where he drinks hot chocolate prepared by a young elf (above), Santa Claus in pajamas freely flirts with her: “I must say that you are very good for your age! This extract is among the most embarrassing that Disney has shot for its series The Santa Clause (or In the footsteps of Santa Claus, in French).

The chimney song (below), performed by a little girl, is another example of pedophile language exploiting the sacred figure of Santa Claus.

There’s something stuck in the chimney

and I don’t know what it is, but it’s been there all night.

I waited for Santa Claus all Christmas night

but he never came and it doesn’t seem normal…

The theoretical idea of ​​Santa Claus

The anthropologist Gregory Bateson has offered an interesting metaphor about the sacred and, above all, the place it occupies in theecology of the human mind. By comparing ideas to living beings, Bateson showed how they are born, live, reproduce and die to create around us a rich, sensitive and vulnerable communication ecosystem. Like species that struggle or cooperate for their survival under conditions that are sometimes favorable to them, sometimes hostile, ideas come together, coordinate, confuse or collide in a competition that is not always fair.

Thus, for the idea of ​​a sacred Santa Claus to survive in the minds of children, we must count on the complicity and solidarity of all adults, whether at home, at school, in media, in shops or in works of popular culture.

On the other hand, for this lie to remain socially acceptable, it is necessary that adults in turn lie to themselves about the obscene reality covered by the fictional character of Santa Claus. As accomplices in this manipulation of the sacred, we need to somehow overlook the moral license the entertainment industry gives Santa Claus when it portrays the reality ofordinary man who dons the costume.

We then sign a pact with the devil by pretending to believe in the existence of a Santa Claus capable of taking children on his lap without having sexual urges; to be generous with them without ruining their parents; to promise them gifts without demanding any service in return; who sees nothing obscene in intruding into the intimacy of families by penetrating their fireplace which is too narrow and not deep enough; nor anything shady to be found in the toddler’s room.

However, it is an open secret that it is men of flesh and blood who give life to Santas. Considering the duality of human nature, becoming complicit in their evil inclinations does not seem to me, therefore, very wise.

The original version of this article was été published on The conversation, a news site à non-profit dédié to the sharing of ideas between academic experts and the general public.

Santa Claus in the collective imagination: between profane and sacred

WE HAVE TESTED FOR YOU... La Bouscarasse aquatic center
Who is Manon Hache, founder of Rendez-Vous Vintage?
The father's signature, by Simon Brousseau, finalist for the 2022 Story Prize | Creation Prize
Tweet
Share
Share
Pin