I often think that the former communist East Germany should have been taken over by the Disney Corporation and continued to function permanently, exactly as it was, as a tourist attraction.

Schoolchildren from all over the Western world could have spent a few days there to find out what a dogmatic society was really like.

Tourists could have paid for package tours, escaping at the end of each grueling day to special cordoned off Western-style hotels.

Then they might have realised, in time, what was happening here in so-called conservative Britain, where, as a new report this week revealed, huge amounts of money and effort are spent on training public sector workers in the left-wing ideology of ‘Equality, Diversity and Inclusion’.

Pictured: Ulrich Mühe in the 2006 film The Lives of Others

Such a vast communist theme park would have been far more interesting than all the usual Disney World tattoos. No one would have had to stay if they hadn’t wanted to. But the most disturbing thing is that many would have done it.

The regimentation is not as unpopular as it should be. The former East Germany is famous for its ‘Ostalgia’, a nostalgia for certainties, scruffy and cheap consumer goods and the cozy atmosphere of a society where everyone thinks the same thing and no one moves. the boat.

Many old toughs loved communal life and respectful society, and still moan today that they wish they could go back to the days of the Berlin Wall. Anyway, they never wanted to cross it. I suspect many more would not have bothered to keep their jobs in ramshackle, dilapidated factories, making wonky products for minimal wages — and paying minimal prices in lackluster stores.

Not everyone who collaborated with the Stasi secret police was blackmailed there. Many enjoyed living under the stern gaze of authority, and being able to denounce their neighbors if they annoyed them. If you doubt it, look at the behavior of quite a few Brits during the great Covid panic, happily flagging neighbors for breaking lockdown rules. It’s surprising how we can come to appreciate the weirder things.

Because Britain forgot that crazy countries of the East German type really existed, such a society is slowly forming among us. Instead of the mechanical formulas of Marxism-Leninism, the young and now the not so young are constantly harassed by slogans and catechisms of equality and diversity. 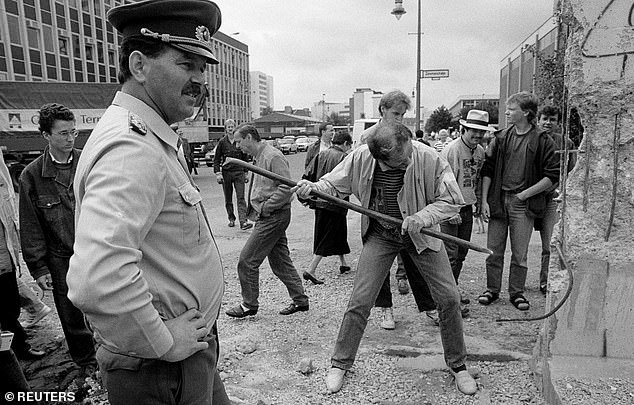 Pictured: An East German border soldier watches as a man hammers a section of the Berlin Wall at Markgrafen Strasse / Rudi-Dutschke Strasse in Berlin, Germany, June 2, 1990

Even television commercials today are full of messages about the joys of multiculturalism and third-wave feminism. And the war on personal responsibility rages on relentlessly, with every failure classed as a medical condition and a drug for nearly every type of misconduct.

One of the main characteristics of the old communist states was precisely that: relentless propaganda. From kindergarten, then in youth movements and in schools – and finally in the workplace – the message of Marxism was hammered home, often by teachers who did not believe in it themselves but who wanted to keep their jobs. .

Their students didn’t believe it either. They could see proof all around them that it wasn’t true. But the authorities didn’t care. All these slogans, all these huge red banners praising communism, were all there to tell those who didn’t like it that they were powerless.

Here, it is much more successful. No other world exists in which these things do not occur. Fewer and fewer remember when it was different. And it’s much more subtle.

If David Attenborough tells you enough times that the world is in peril, you’ll believe him. If you object to being told that it is shameful and wicked to love old British culture, you are classed as a wicked racist who hates your fellow man. If you suspect that children are best raised by their own parents, you hate women and you should be ashamed. Etc.

The great paradox of this week’s revelations about indoctrination in this country is that they were published by a think tank called Conservative Way Forward (CWF). Yet no one can really avoid the terrible truth that it was under a Conservative government that these classes of accuracy escalated.

In its Defunding Politically Motivated Campaigns report, CWF says it “submitted freedom of information requests to 6,000 public bodies and went through line-by-line accounts of government departments and external agencies and the charities they fund.”

He revealed that 10,000 people are employed in ‘equality, diversity and inclusion’ (EDI) at an annual cost of £557million. Another £212 million was spent on race, sexuality, unconscious bias and EDI training. These are on top of almost £5.49billion spent by quangos on dubious ends – like the Office of Students using public funds to impose what the CWF calls ‘un-British’ diversity schemes and ‘decolonization’ to students, with the Arts Council spending money on ‘unlearning whiteness’, or even HS2 spending half a billion on EDI.

The CWF asserts that “this waste divides, continues and increases from year to year”. He says he has been “exceptionally careful to separate the good work that many of these organizations are doing from the politically motivated misuse of taxpayer funds.” 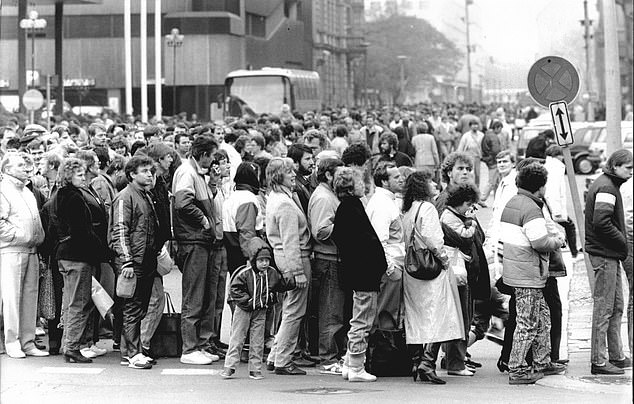 Pictured: Queues at the border crossing the Berlin Wall after it reopened in November 1989. After several weeks of civil unrest, the East German government announced on November 9, 1989 that all citizens of the GDR could visit West Germany and West Berlin.

Of course, the expense is shocking at a time when we are told we can no longer afford many important things. But surely more shocking still is the relentless spread, clearly backed by authority, of opinions which undermine and contradict the largely Christian and deeply British ideas of law, justice, liberty, personal responsibility and morality that were previously found under the institutions of this country.

One example that may come as no surprise is the report’s conclusion that the UK’s 48 police forces now employ 250 staff to “mainstream equality, diversity and inclusion initiatives across all sectors of the company “.

The survey touches on a small part of a vast and revolutionary change in our society, well underway since 1997, but greatly increased since the passage of the crucial Equality Act in 2010. No one really knows how big it is extended in schools and universities, though occasional squabbles and scandals suggest that openly expressed conservative views won’t do you much good in such places, as a teacher or student.

It could well be said that New Labor was responsible for much of this policy. But it has been 12 years since Labor left power, and there are no serious signs that it has backtracked.

If we had undergone a real violent revolution or if we had been invaded by a politically correct foreign power, I suppose we would have to put up with this kind of change, because our new leaders have turned the world upside down.

But what I can’t stand is the fact that those in government who claim to be defending us against this sort of thing have in fact endorsed it, reinforced it, and continued it.

Do they not realize that once the last traces of the debate have passed, they will no longer be needed themselves to cover the abolition of this country?

Not all news on the site expresses the views of the site, but we transmit this news automatically and translate it through programmatic technology on the site and not from a human editor.