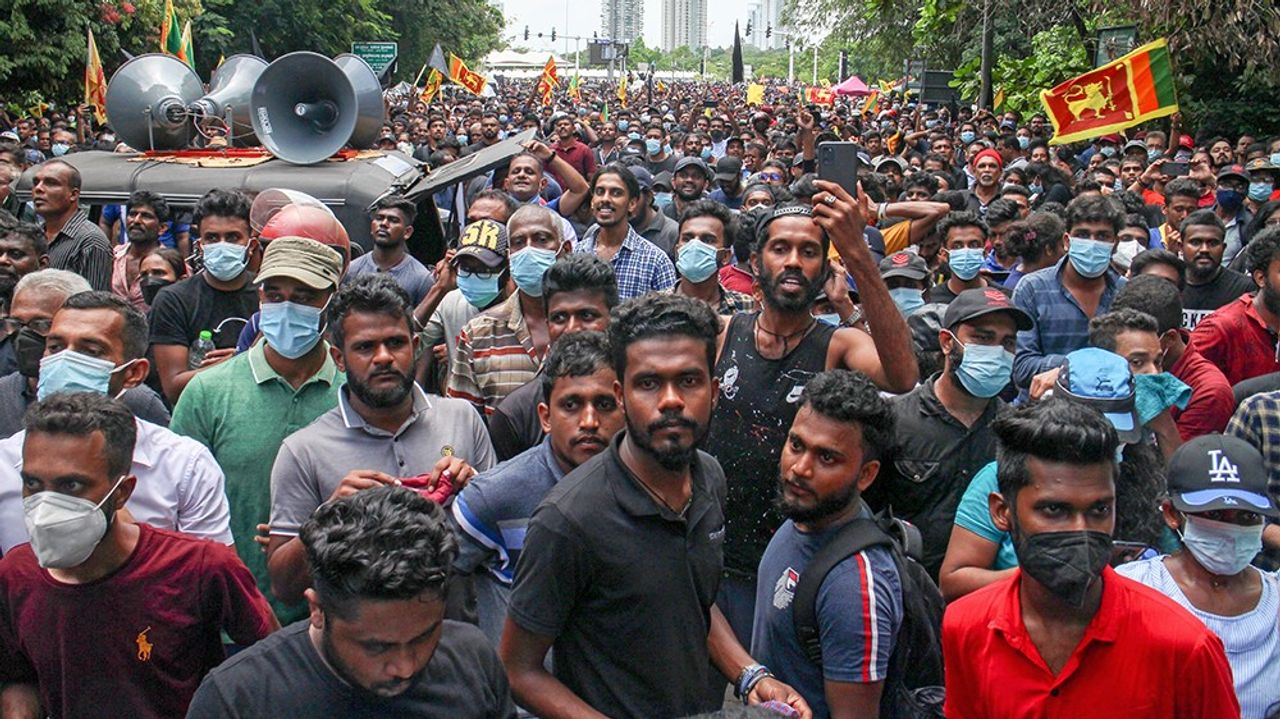 The Socialist Equality Party (PES) condemns the declaration of a state of emergency by President Gotabhaya Rajapakse last Friday and demands its immediate lifting.

The declaration of a state of emergency is being prepared to crush the working class and the struggle waged for a month by the workers who demand the resignation of the president and an end to the social misery created by galloping inflation and chronic shortages of essential products.

In the one-day general strikes of April 28 and May 6, the working class demonstrated its immense social power in the struggle for these demands. Last Friday, the self-employed, the rural poor, fishermen and small entrepreneurs also joined in the general strike and the hartal (closure of all shops and small businesses), paralyzing the entire economy of the island.

The strike and the hartal terrified the ruling class and the entire political establishment – ​​both government and opposition – including the unions who called for the strike.

Rajapakse’s response to last Friday’s strike was to immediately impose a state of emergency to bolster his already extensive authoritarian executive powers. Under the state of emergency law, he can deploy the army and police to arrest people without warrants, ban strikes, demonstrations and meetings, impose curfews and media censorship, and outlawing political parties.

The president has already taken the first step in the deployment of the army by canceling all leave for members of the security forces. The army, strengthened during the 26 years of communal anti-Tamil warfare, is the largest per capita in South Asia and is highly politicized. Over the past two years, Rajapakse has integrated senior army officers into key civil administration positions.

Rajapakse’s claim that he invoked emergency powers to maintain “essential community life supplies and services” is an outright lie. His regime and the capitalist class have already completely disrupted “supplies and services essential to the life of the community”, creating intolerable conditions for workers and the poor.

While the Rajapakse regime mobilizes the military, the unions demobilize the working class. Visibly shaken by what they called the “unexpected success” of last Friday’s strike and hartal and fearing a confrontation with the government, the unions called off the indefinite general strike that was due to begin next Wednesday and replaced it with symbolic demonstrations: daily gatherings of workers at lunchtime.

If the president and government do not resign, they say they will stage a march to the national parliament on May 17 and demand a solution. Their solution, as they have already explained, is for the capitalist opposition parties – mainly the Samagi Jana Balawegaya (SJB) and the Janatha Vimukthi Peramuna (JVP) – to form an interim government and then snap elections be held.

It is a solution for the ruling class and not for the working class. All parliamentary parties – government and opposition – have pledged to impose the draconian dictates of the International Monetary Fund in exchange for an emergency bailout. As Finance Minister Ali Sabry said, “Things will get worse before they get better… The next few years will be painful”.

The Socialist Equality Party (PES) condemns the trade unions’ treacherous decision to call off this week’s general strike. This only buys President Rajapakse time to mobilize the army while plotting behind closed doors with opposition parties. He offered the premiership to SJB leader Sajith Premadasa, who turned it down, but he said his party would support an interim regime from the outside.

If the situation is left in the hands of the unions, the working class will be betrayed. These are the same unions that have betrayed all the struggles of workers – including health care workers and teachers – over the past two years. The leaders of the Federation of Health Professionals, Ravi Kumudesh and Saman Ratnapriya openly state that they had called their members to strikes and demonstrations not to fight for workers’ rights, but to “manage their anger”.

The urgent task facing the working class is to mobilize its strength independently to defeat the threat of military repression from Rajapakse and to fight for a political program that represents its class interests.

The SEP urges workers to immediately form their own democratically elected action committees, independent of unions and capitalist parties, in every factory and workplace, on plantations and in workers’ suburbs and towns.

The PES is ready to help in the creation of these action committees, as we have already done for plantation and health service workers. We encourage workers and young people to contact us.

We agree that President Rajapakse and his government must go, but that is not enough.

● The PES demands the abolition of the executive presidency, which is now used to prepare a presidential dictatorship supported by the army.

● The PES demands the repeal of all repressive laws. These include the Public Safety Act which allowed the President to invoke a state of emergency; the Essential Public Services Act which is used to criminalize industrial strikes; and the Prevention of Terrorism Act which allows arbitrary arrests and prolonged detention without trial.

Against the backdrop of the deep crisis of capitalism in Sri Lanka and around the world, the ruling class is determined to defend its profits and wealth by imposing enormous new burdens on the working people. The working class needs a political program based on socialist and internationalist principles in order to fight for its social needs.

The PES proposes the following demands as a basis for the political and industrial struggle of the action committees:

● For workers’ democratic control over the production and distribution of all goods and resources essential to people’s lives! Nationalize the banks, the big companies, the plantations and the other big nerve centers of the economy!

The capitalist class exploits its possession of the means of production and distribution in order to amass huge profits. The only way for the working class to meet its basic needs is to take them out of the hands of the capitalists and take stock of the resources so that they can be used to end the present suffering and misery.

● Repudiate all foreign debts! Refuse the austerity demands of the IMF and the World Bank which represent the bankers and international financial institutions of the capitalist classes!

The Rajapakse government justifies its harsh austerity measures in order to repay billions of dollars to international bankers. The working class has not accrued these debts and should not be forced to pay them. Money from reimbursements should instead be used to make food, fuel, medicine and other essentials available to workers at affordable prices.

The rapid rise in inflation – nearly 30 percent in April on an annual basis – has already eaten away at wages considerably. Food inflation reached 46.6 percent in April and many workers are unable to adequately feed their families. Increase salaries immediately to compensate for past losses and index salaries on a monthly basis to the cost of living.

Successive governments have stripped public education and health care of funding while pumping money into expanding military and police forces that are now poised to quell the mass protest movement.

The betrayal of the unions forces action committees to organize a unified struggle to defend the working class against state repression, oust the Rajapakse government and ensure that workers’ rights come before corporate profits. super-rich.

The workers – Sinhalese, Tamils ​​and Muslims – all took part in last Friday’s general strike on the basis of their common class interests. Any attempt to divide the working class by stirring up communal hostility and hatred must be resisted.

This political struggle inevitably raises the question of which class will govern. We warn that a capitalist government – ​​be it the Rajapakse regime or an interim government – ​​will stop at nothing to impose the demands of international finance capital and use the military to suppress any opposition.

The establishment of independent action committees across the island and the development of a unified political struggle will win the support of the rural masses and establish the basis of a workers’ and peasants’ government to reshape society according to socialist policies.

There is no national solution to the economic crisis in Sri Lanka. It is part of the rapidly worsening crisis of global capitalism, intensified by the COVID-19 pandemic and now by the US-NATO proxy war against Russia in Ukraine.

Workers around the world face similar attacks. The working class of Sri Lanka must look to its class brothers and sisters in India, throughout South Asia and across the world for a common struggle against capitalism.

What is especially needed is the building of a revolutionary leadership in Sri Lanka and internationally. We urge workers and youth to join the PES, the Sri Lankan branch of the ICFI, and make it the necessary mass party that can lead the struggles to come.

Oppose the draconian state of emergency! No to presidential dictatorship! Abolish the executive presidency!