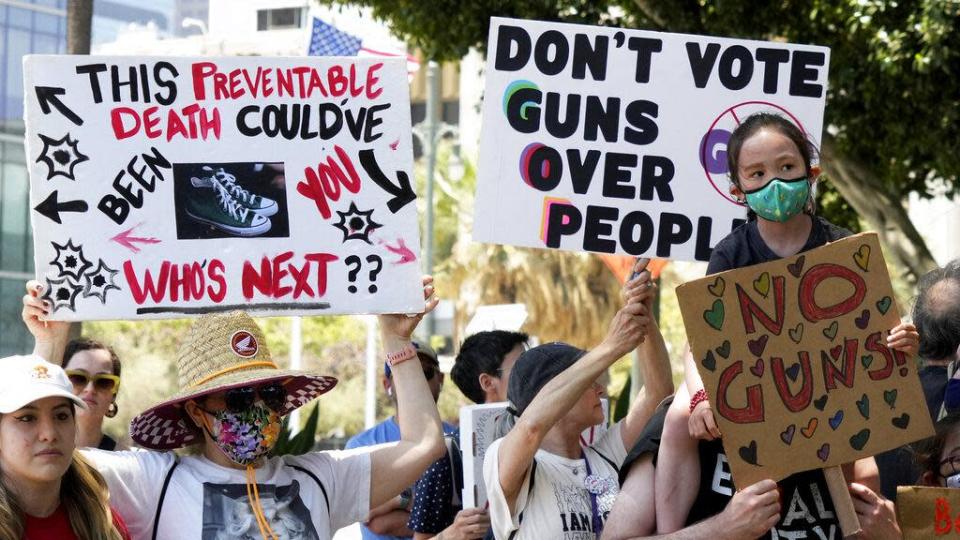 Republican and Democratic senators agreed on Sunday on some measures to restrict access to firearms in the United States, a rare compromise but which remains far below the reforms demanded by Joe Biden after new killings.

Launched after the Uvalde massacre, which left 21 dead including 19 children in a Texas primary school at the end of May, the parliamentarians’ initiative provides for certain restrictions on access to weapons for people deemed dangerous, the strengthening of security schools and the funding of programs dedicated to mental health.

The President of the United States immediately hailed “important advances“, even if it does not include everything “necessary” for “save lives“.

However, it is the text “most significant gun control vote to pass in Congress in decades“, he pleaded in a press release.

The presence of ten Republican senators among the signatories of the press release announcing this compromise suggests that such a bill has a real chance of passing the Senate if all 50 elected Democrats are in favor of it.

A qualified majority of 60 votes out of 100 senators is necessary for its adoption, which has so far blocked any major progress towards better regulation of firearms, due to the opposition of the conservatives.

“With support from elected officials from both parties, there is no excuse for delay, and no reason not to move quickly in the Senate and the House.“, added Joe Biden, who promises to immediately enact the text if it is adopted.

The Uvalde massacre and the one a few days earlier in Buffalo, in the northeast of the country, had moved America and triggered several parliamentary initiatives.

A group of senators, led by Democrat Chris Murphy with Republican John Cornyn, has been quietly working in recent days to find the agreement announced on Sunday.

The twenty senators, ten Republicans and ten Democrats, agreed to “a common sense bipartisan proposal to protect America’s children, keep our schools safe and reduce the danger of violence across the country“, according to the joint press release.

The agreement outlines the federal government’s support for state-by-state laws that would take the weapons they possess out of the hands of those deemed dangerous.

It provides for the funding of various support and psychological assistance programs and the strengthening of security in schools, in particular through the training of teachers.

These senators also want to strengthen criminal and psychological background checks for gun buyers between the ages of 18 and 21, as well as better control of the illegal sale of guns.

“Our project saves lives while protecting the constitutional rights of law-abiding Americans“, summarizes this group in its press release, listing proposals but without yet presenting a real text of law.

The deal of the day”shows the value of dialogue and cooperation“, greeted the leader of the Republican senators Mitch McConnell. In a deeply divided America, an agreement between elected Republicans and Democrats in Congress is rare, all the more so on this usually very divisive subject.

The compromise, however, is a far cry from what many Americans are asking for, tens of thousands of whom took to the streets of many cities across the country on Saturday, including the capital Washington, to demand strong reforms from Congress.

Joe Biden had publicly shown his support for the protests, listing the measures he wants to see adopted but absent from Sunday’s agreement: bans on assault rifles and high-capacity magazines, background checks for all buyers weapons – and not only those under 21 -, obligation for individuals to keep their weapons locked up.

The House of Representatives had voted on Wednesday a different text which includes the prohibition of the sale of semi-automatic rifles to those under 21 and that of large capacity magazines, but it has almost no chance of passing in the Senate.

In the United States, a minimum agreement between Republicans and Democrats on firearms