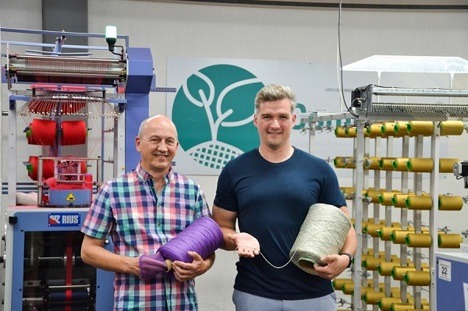 What France started with its nationwide ban on plastic is gradually taking hold in other countries. That’s why TVU Garnvertrieb Ltd from Leutershausen now offers a suitable solution with its CompoPac cellulose nets, which aim to meet the growing demand for sustainable yet compostable packaging.

FreshPlaza spoke with Sales Manager Michael Bandel and his colleague Dominik Gedon about the current development of the nets as well as TVU/CompoPac’s latest product: plastic-free supports for greenhouse cultivation. As with the nets, it is a 100% ecological alternative based on cellulose, which guarantees a climate-neutral value chain.

Growing demand for cellulose nets across Europe
“When we started production in 2019/2020, the market was still using very differentiated models. Interest in cellulose nets was relatively low, probably because the price was still too high for some customers. At that time, however, we already had the objective of conquering the entire European market. Thanks to the work of people like Greta Thunberg, we have seen a much wider social questioning, such that today some retailers are packaging their organic products with cellulose,” explains Bandel.

TVU only uses fibers from Austria as the starting material for the nets. “It is important for us, in terms of quality and sustainability, that the entire production (from the fiber to the finished net) takes place in Europe. It is 100% “Made in Europe”, adds Gedon.

When the “AGEC” law came into force in France, the company was still in its infancy, but it was able to quickly prove itself on the French market. “But the supply was far from matching the demand. Over the past year and a half, we have developed our production enormously, in several stages of expansion, to meet strong market demand. The development of cellulose nets continues to gain ground,” says Bandel. The evolution in Spain is similar to that of France. In general, cellulose will emerge as a global player, says Bandel. Therefore, after this year’s production expansion, the next stage of expansion, for 2023, is already planned. 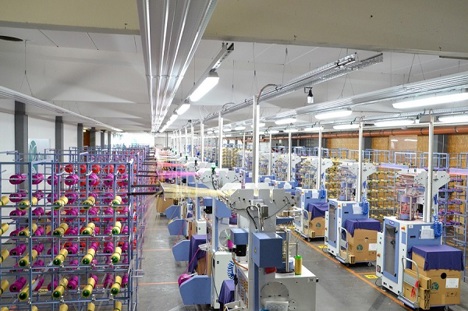 Photo: The production hall after the 2022 extension

A growing market: service orientation in the foreground
Nets are mainly used for products such as onions, garlic, apples and citrus fruits. As CompoPac is a brand supported by two companies, namely TVU and Weinhold-Textil Ltd, it is possible to react quickly to the current market situation. The main fillet buyers are the large packers as well as producers and cooperatives.

“However, our competitors are not standing still. Of course, producers of plastic nets are still present in the market. Some are already studying the possibilities offered by cellulose. But the market is still in the growth phase, so it is currently more about service, speed and flexibility. These are the factors that will convince customers. And it is precisely in these three areas that we are very well positioned. In addition, direct contact with customers is also one of our absolute strengths. »

Fully compostable climbing plant supports for greenhouse and polytunnel cultivation
TVU/CompoPac’s latest product is cellulose media. For the production of this product, TVU has previously met many growers who have actively participated in the development of the products. “We focused on the idea of ​​producing a cellulose cord that is fully compostable, replacing plastic materials. The twines must be able to hold an entire crop without tearing. But beyond that, compostable ropes have many other subtleties, which we focused on during the development phase. In terms of performance, they will offer the same characteristics as plastic strings. However, a major advantage is that the cellulose ropes can be disposed of and composted with plant residues. This eliminates the sorting process and saves the grower additional disposal costs. » 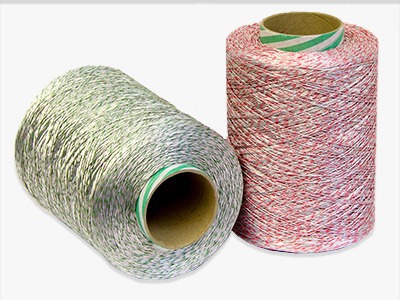 The decisive factor of this product is its resistance. “It starts with a resistance of 300 Newton, which is particularly suitable for light plants. From 400 Newton, we speak of growth aids for heavy plants. We have adapted the twine to the respective products. The climbing twine is very suitable for growing in greenhouses. »

Gedon: “As textile specialists, we have everything under one roof. The various stages of in-house production, in-house stress test equipment in our test lab and wire sourcing department. We can also count on short delivery times and consistent quality. »

A foundation laid 20 years ago
The Bavarian company, whose production site is in Leutershausen, is the sole supplier of nets. It has its own yarn supply, its own dyehouse and its own knitting machines. “In this way, we bring together several parts of the value chain under one roof,” explains Michael Bandel. Added to this are the extensive logistics options, which create remarkable flexibility, and the quality management division, with its own laboratory, which guarantees a high quality product that is always food safe. 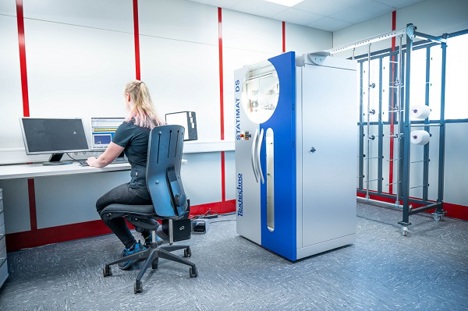 Photo: Testing the tensile strength of the thread with the Statimat DS

Gedon reports that the company recognized supply and logistics issues early on, so they managed to stock sufficient quantities of the raw materials needed to ensure continued availability.

“More than 20 years ago, our corporate philosophy was already built around renewable energies and sustainability. This is why today we rely on the production of electricity by our own photovoltaic system (approximately 1,000,000 kWh/a) and on the production of heat by our woodchip heating system (approximately 8,000,000 kWh ). Thanks to this strategy, we are able to face the global crisis with much more ease. » 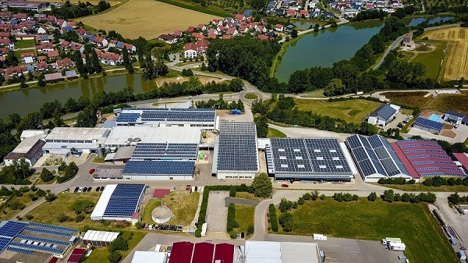 Dominik Gedon will participate in the Fruit Attraction fair in Madrid next October. He invites all who wish to meet him. You can contact him in advance or even during the fair via info@compopac.de or +49 171 8434 037.