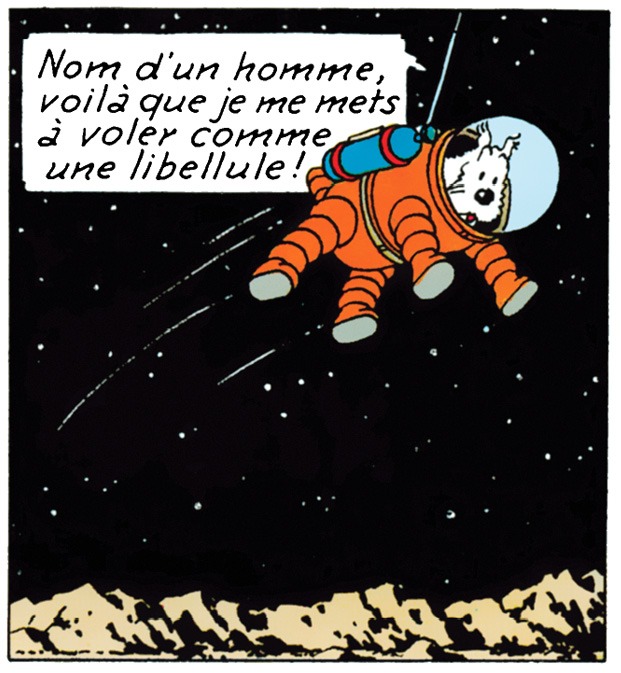 After flying to the Moon, Snowy recently flew back into the air during the Zero Gravity mission! Same amazement for Tintin’s companion, but is it really the same phenomenon?

All bodies are subject to the law of universal gravity formulated by Sir Isaac Newton. We have all heard of the legend describing Newton leaning against a tree, discovering this law of gravity after an apple fell on his head!

The true story is not very different, as William Stukeley, biographer and friend of Isaac Newton, recounts in his memoirs of the life of the physicist (original title Memoirs of Sir Isaac Newton’s life appeared in 1752)

[…] After dinner, the weather being hot, we went into the garden and drank tea in the shade of a few apple trees, he and I alone. In the midst of other speeches, he told me, he was in precisely the same situation as when the notion of gravitation had once occurred to him. “Why should this apple always descend perpendicular to the ground,” he thought? In the center of the earth? Surely the reason is that the earth attracts him. There must be a power of attraction in matter. and the sum of the power of attraction in the matter of the earth must be in the center of the earth, and not on one of the sides of the earth. So this apple falls perpendicularly, or towards the center. If matter thus attracts matter, it must be in proportion to its quantity. therefore the apple attracts the earth, as well as the earth attracts the apple.”

From this thought was born the famous mathematical formula describing the force of attraction between two bodies:

When Snowy walks on the Earth, he is therefore attracted to it in proportion to his mass. The moon being less massive than the Earth, the force felt by Snowy is less great and it therefore “flies away” more easily.

We all know this force very well, since it is weight! If Snowy’s weight therefore changes when he lands, his mass does not change (So Snowy had not dieted during the rocket trip!). Rearranging Newton’s formula, we get

where g gathers G as well as the mass M and the square of the distance r between the two objects.

This g is therefore dependent on the body on which Snowy, but also Tintin, Captain Haddock and the Dupondts are found.

During the parabolic flight, Milou and Tintin on board the ESA plane experienced a situation of microgravity. They were still well attracted by the Earth but the acceleration of the plane almost compensated for this attraction. The sum of the forces felt by the occupants was therefore almost zero for a few seconds. Once again, Snowy was not put on a diet during the flight!

And you, what weight would you have on the Moon or Neptune? Use the table below to locate the g of each celestial body and multiply it by your mass (in kg)! Where to go on a trip to feel lighter?

As Tintin had made clear to the Captain, who was also surprised to fly away, his weight on the Moon was 6 times less than that on Earth! On the other hand, the Captain would have felt almost three times heavier if he had gone to Jupiter!

Gwenhaël W. De Wasseige is a professor at UCLouvain in astroparticle physics. A member of the IceCube and KM3NeT collaborations, she leads neutrino hunting both at the South Pole and in the Mediterranean Sea. Each month, Gwenhaël will tell us through her chronicle of the infinites the latest news that affects the universe and the domain of the infinitely small.

Chronicle of infinities: Snowy flies away!