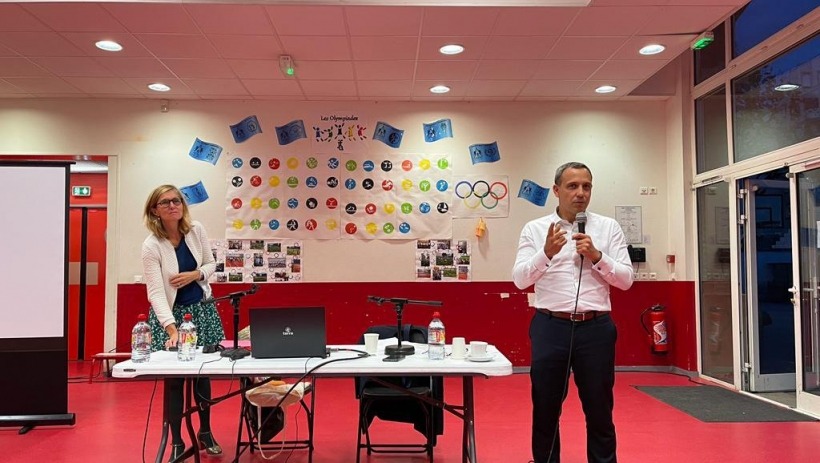 Recently, a public debate around the draft law on child protection was held at the Jules Ferry school in Asnières-sur-Seine. This discussion was moderated by Bénédicte Pételle, MP and rapporteur for the bill in question, and Adrien Taquet, Secretary of State for Child Protection. The two representatives of the presidential majority debated with the public present around the various themes addressed by the bill: the placement of isolated young people, the control of personnel or the remuneration of foster families.

“The bill is only one component of the action that I have been leading for two years now within the Government. As soon as I took on my responsibilities, I talked about setting up a framework for children. In this context, there are three pillars which are essential”, expressed Adrien Taquet in the introduction to the debate.

Towards the endn hotel accommodation

The law, through these three pillars, aims to improve the situation of children in care, in particular by prohibiting the placement of minors entrusted to Childhood Social Assistance (ASE) in hotels, except in a few exceptions. According to the Secretary of State, this mode of accommodation leaves young people on their own in most cases.

Several exceptions will be allowed in order to “respond to emergency situations or ensure the safety and shelter of minors”. A recent report from the General Inspectorate of Social Affairs (Igas) pointed out this insecure placement method. According to this report, between 7,500 and 10,500 minors are concerned, 95% being unaccompanied foreign minors, known as unaccompanied minors (MNA). A decree will have to define the standards and criteria for supervision in child welfare establishments.

Once promulgated, the law will allow the systematic search for the possibility of entrusting the child to a person of his entourage (family, neighbors or friends), before considering a placement. Combating what the Secretary of State calls inequalities of destiny is the main objective of the bill. According to Adrien Taquet, inequalities begin “in the womb of the mother”. He hopes that this will no longer be the case thanks to his action.

The bill is part of a government policy launched in 2019 which has been allocated 80 million euros for the child protection sector.

Awareness-raising action for teachers on violence. Bénédicte Pételle, Member of Parliament and former teacher, is delighted with the development of these awareness-raising actions: “When I was a teacher, I wanted to develop actions of this type, but some colleagues were always embarrassed, they said that they didn’t had no time to process this. It is a good thing that this is developing in institutions today. »

Find the video of the full conference here

The subject of child welfare (ASE) was also discussed at length. Adrien Taquet spoke of “a very complicated system, managed by the departments”. The ASE is 320,000 children placed. Half are in centers and foster families, the other half in their families, the latter benefiting, however, from social and educational support from the ASE. Another strong point of this law, the remuneration of host families. Indeed, the law provides that families will be able to receive remuneration equivalent to the minimum wage from the first child welcomed.

“Child protection saves thousands of children each year,” recalled the Secretary of State. He insisted at length on the primordial role and on the importance that institutions have “Child protection is not a decentralized competence, but a shared one. When there are malfunctions, it may be due to the departments, but also sometimes the fault of the State. We must, at all levels, live up to our responsibilities, so that the fight for child welfare is effective. concluded Adrien Taquet.