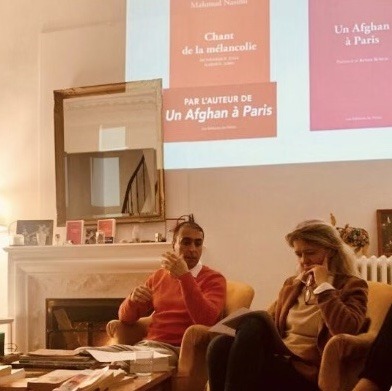 Mahmud Nasimi fled Afghanistan in 2013. After a harrowing journey of four years, where he rubbed shoulders with the inhuman and brushed with death, he arrived in Paris. With only baggage, loneliness and despair. Until that December morning when his footsteps led him to the Père-Lachaise cemetery.

He is seated in an armchair, his back to the glowing fireplace. Hands resting on his crossed legs, Mahmud Nasimi observes in silence the gradual arrival of the guests. He is the guest of the Cercle’s literary evening “Inexplorée”, organized in Marseille. Who is this man who managed to write in such poetic French a ”Afghan in Paris”, his first novel? Why did he prefer our language to his? At 35, he has already lived a thousand lives. The first is her happy and carefree childhood in the countryside, before Kabul, with her grandmother.

Then the horror. He who wanted to serve in the police is forced by the Taliban, at 26, to join their ranks. He then hastily leaves his cocoon, leaving behind him, family, friends, studies (law and political science). Then begins a long crossing of 730 days – Iran, Turkey, Greece, Macedonia, Serbia, Hungary, Austria, Germany, Belgium. Then France, chance “. The young man will know the cold, the hunger, the prison, the aggressive sun, the thirst, the mountain, the desert.

But what he experienced in Paris for the first few months cost him ” more than the difficulties encountered on [son] path » : he is greeted by suffering and pain “. At night, he sleeps in the street, next to the garbage cans, as close as possible to the administrative office which grants the right of asylum. During the day, he bumps into the indifference of passers-by. He longs to talk and smile, but there was no one to hear me “.

The discovery of the great classic writers

One morning in December, as he strolls frozen in the streets of Paris without a precise goal, like every day since his arrival, his steps bring him to the Père-Lachaise cemetery. He is stunned by the silence and the beauty of the place. He rushes slowly down the aisles, praying at each grave as his mother taught him. Then stops in front of what seems to be someone very important, given the size of the bust in his likeness. It’s Honoré de Balzac.

He discovers on the Internet that this gentleman is a great French writer and avidly reads everything about him. His life, his work. An explosion. ” A second birth “, he even says. Later, he will read ”La Peau de Chagrin”, his first novel. Then begins another journey, this one happier. The journey to literature and the French language. His ” refuge “. And to think that, as a young man, Mahmud Nasimi avoided reading! At school and his notebooks, he preferred the street.

♦ (re)read: The incredible journey of the Yemeni archives stuck in a storage room

During the JRS French course (Jesuit Refugee Service – the association that accompanies him), he learns the conjugation of eat, go out, see, come “. But every evening, when he returns to sleep in the room he shares with another refugee, on ” his meager unremarkable sofa bed, stuck against a yellowed and moldy wall », the perseverant immerses himself in Les Misérables by Victor Hugo or Les Fleurs du mal, by Baudelaire. He notes the words whose sound speaks to him and touches him. Then translates them into his mother tongue to understand them.

He is no longer alone. Books become his close, faithful friends. With them, he learns to tame the sorrow, to clear the darkness of his thoughts “.

Words console him and understand him, open up an unknown world to him. New horizons, but also reminiscences. It is by looking for the meaning of ”clapotement”, read in Maupassant, that arises ” the song of the river that rocked [son] childhood “. While learning the French language, the language of love and peace, the language of Molière “, he plunges into his memories.

The fabric of his mother’s dress which he held as a child, the mothering gestures of his grandmother against the still furious uncle, but also the discovery of the kite or of his neighbor of the same age. With the celebrities of the cemetery – Proust, Éluard, Apollinaire…, this uprooted man becomes established every day a little more in our language. He drinks up his words. Satisfied with her beauty.

Through classic books, but also singers like Brel and Piaf, he discovered France, its culture, its history, its landscapes. Dunkirk beach, vineyards and olive trees in the South. Camembert from Normandy. But it is Paris that he experiences in his flesh. In the Lapin-Agile cabaret, in Montmartre, he imagines Gérard de Nerval or Guillaume Apolinaire “ sitting under a tree, pen in hand “. While around him walk around women in long dresses and men in hats and cigarettes in their mouths “.

The more he spends his time in the folds of her dress », the more the City of Light becomes dear to him. He strolls through the Montmartre cemetery to greet Charles Baudelaire, Marguerite Duras, Guy de Maupassant. Sometimes he walks to the Café de Flore to imagine his beloved writer Albert Camus on the terrace. He strolls with George Sand on the Quai des Grands-Augustins, along the booksellers. But also with Victor Hugo place des Vosges. Or even with Simone de Beauvoir and Jean-Paul Sartre at La Sorbonne.

Writing, the other shore

Over the months, with the sonorous words, in whole notebooks blackened with his fine and untied writing, he creates a ” collection of words – emotions, feelings, smells. These words then become pieces of text “. Every day, he has a friend read his sentences, of which she only keeps half. ” The rest was not grammatically or literally correct “. But nothing discourages him. Not even the people who laugh at his stubbornness to write in French, he who does not ” don’t even speak a sentence correctly “. Yet it’s simple: he refuses to write in Dari, his mother tongue. Because he has ” tasted literature through the French language “.

His strength ? This optimist is carried by the hope, the hope, the unfailing love of his mother and his grandmother, their advice. Above all, he has the feeling of tipping over, through writing, on another bank where he draws consolation, hope and peace “. He keeps coming back to his friend with three, four, five more sentences. And so on for three years. Until ”An Afghan in Paris“take shape.

On the off chance that he sends his manuscript to about twenty publishing houses. Six months later, he received a favorable opinion from the Palais editions. The editor has a crush and publishes it as is. His passage on the La Grande Librairie show is of the same spring. From the writing of the first sentence of his novel, he already saw himself on the set of this program that he appreciates so much. Besides, he carefully kept his shirt and tie in his suitcase – “ the second family that took me in can attest to that – in case his dream comes true. It was. Since then, he has appeared on many other shows and is writing a third book, ”Song of melancholy” (see bonus).

He never thought of becoming a writer. Even today, he doesn’t feel worthy of the name, just ” the author of (his) books “. However, it is in this capacity that he is invited, from book fairs to conferences, everywhere in France – not yet abroad as long as he does not have the authorization of the Prefecture. It also works in schools. To encourage young people to read and share with them his faith in life. But also to pass on to them his leitmotif: “ if we stop complaining, opportunities arise “. This excellent representative of the praise of patience continues to learn the French language. And awaits his naturalization for this country for which he nourishes a love ” bubbling “. Endless love.♦