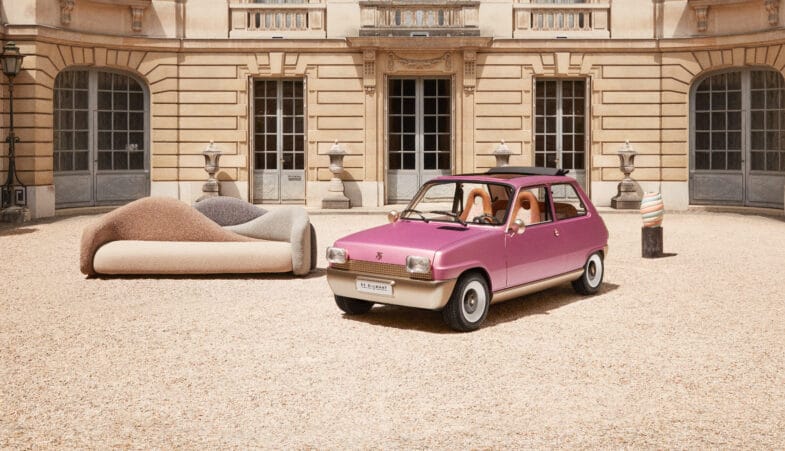 This year, Renault celebrates 50 years of the friendly and very popular R5. While waiting for the new 100% electric Renault 5 announced for 2024, the former Régie Renault has teamed up with designer Pierre Gonalons, the French interior design specialist. The 100% electric Renault 5 Diamant concept car thus showcases French luxury for a retrofit that is as original as it is successful.

A few weeks ago, during the Roland-Garros tennis tournament, 100% electric Renault 5s caused a sensation in Paris, as official shuttles. This time, the diamond firm is reinventing the Renault 5 after having presented, last year, a first retrofit dedicated to the 60th anniversary of the Renault 4, namely, Suite N°4. In the same spirit but, with a more luxurious, elegant and refined treatment, here is the Renault 5 Diamant.

The Renault style office and Pierre Gonalons aimed to sublimate the R5. The result is quite incredible with, to begin with, bodywork that is still as recognizable and typical of the Renault 5. Sleek, the Renault 5 Diamant brings out many visual codes specific to the R5. The headlights of the R5 are, on the R5 Diamant show car, taken out of its body to project forward in the form, of course, of diamonds. 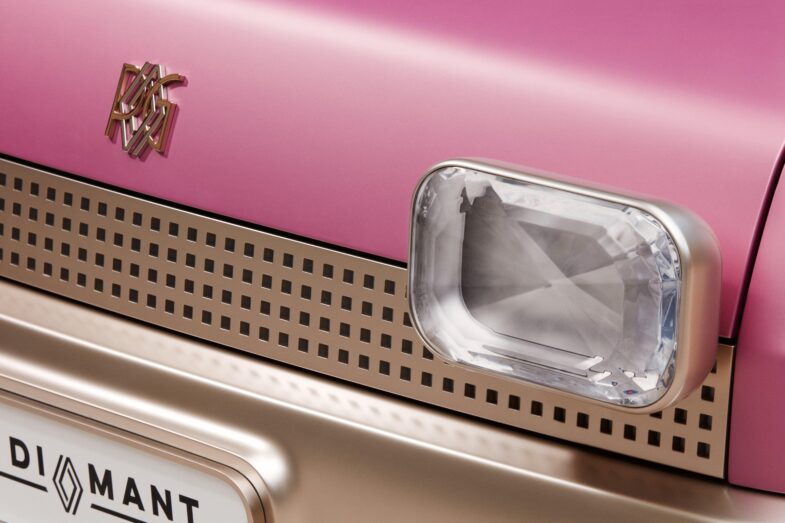 As for the shiny pink hue that “dresses” this R5, it fits perfectly with the idea of ​​making the French city car the queen of French cars thanks to the use of an varnish gIvré which offers, in the light of the sun, golden highlights and others blue when it is darker. After Louis XIV, the “Sun King”, here is the “R5 Soleil”, a sun being represented on its rims. 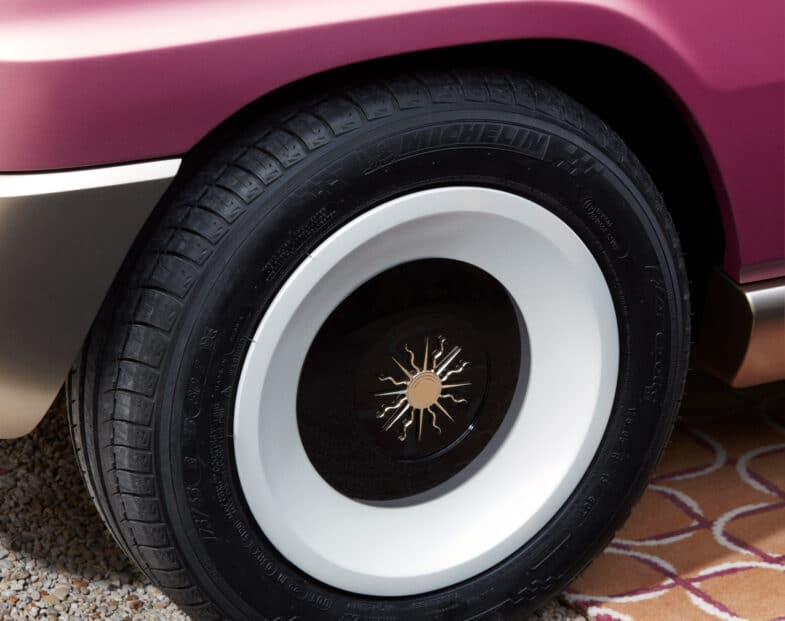 “I am honored by Renault’s invitation to reinvent the legendary R5 on the occasion of its fiftieth anniversary. The brand gave me carte blanche to design the car of my dreams. The R5 embodies, in my eyes, a pop, optimistic, resolutely contemporary life. With Renault 5 Diamant, I wanted to pay tribute to its revolutionary design while translating my universe of shapes and colors into the automotive world. » 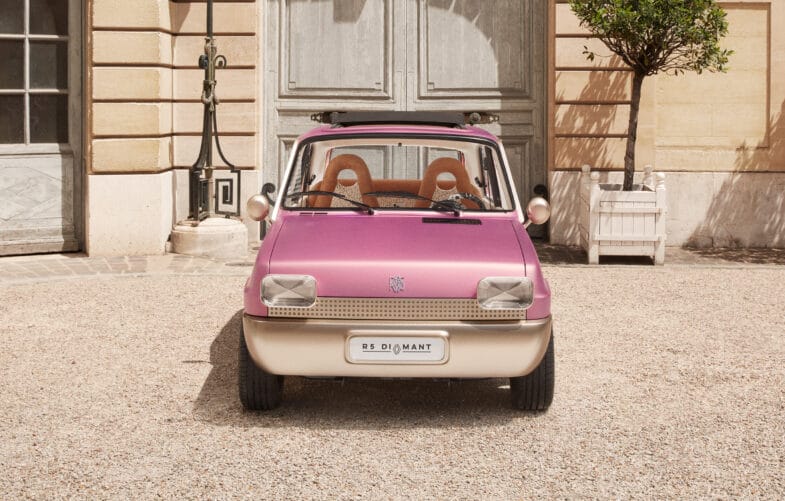 Lower down, the grille of this unique Renault 5 Diamant reveals a perforated and gilded treatment with an Art Deco finish, an expression of style dear to Pierre Gonalons. As for the bumper of this R5 Diamant, the curves of its contours are identical to those of the original R5. This is an opportunity to recall that in 1972, the French car manufacturer presented a first electric Renault 5 (pictured below). 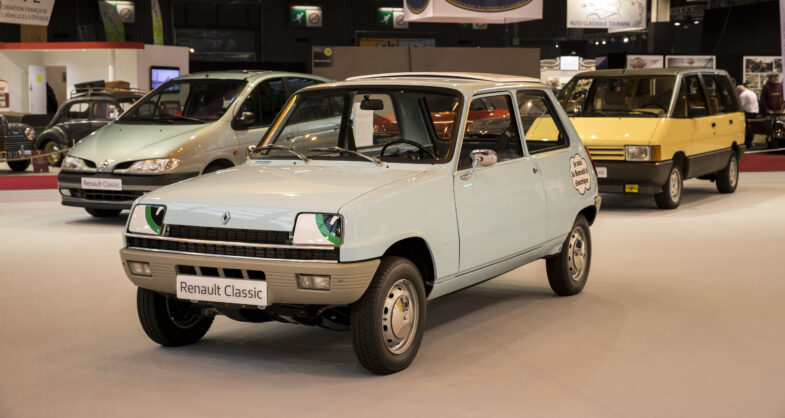 The flanks of the 100% electric Renault 5 Diamant also bring out certain curves, such as the mirrors and the “golden adornment” rims, these wheels being originally from the Alpine version of the R5. 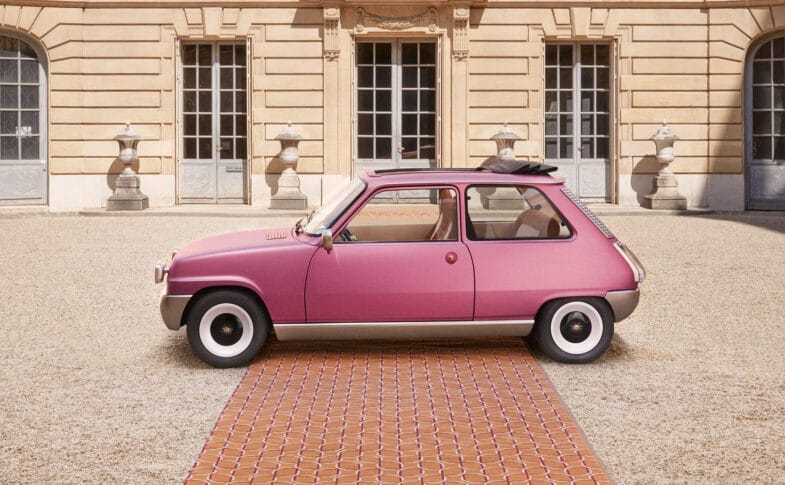 The rear part of the Renault 5 Diamant uses the same visual themes as the front part. For example, the optics also shine brightly. Not without humour, in the event of a failed reverse gear, it could be very expensive for the driver of this R5. 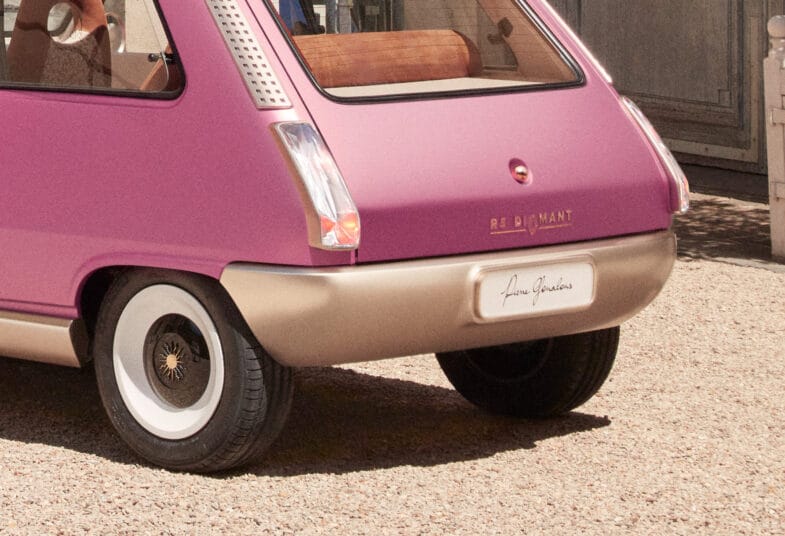 Let’s come to the incredible interior of the Renault 5 Diamant, or R5 Diamant. Note that its steering wheel made of marble on carbon is quite functional despite its snail shape. Renault Design and Pierre Gonalons have also called on the best French craftsmen to create an atmosphere worthy of an Art Deco palace. As such, the horsehair fabric visible on the dashboard and the doors was developed by Le Crin, a leading craft company in the manual weaving of this material. The Renault 5 Diamant therefore pays tribute to French craftsmanship, as with the floor mats designed by Pinton, one of the last upholstery companies to respond to French art. 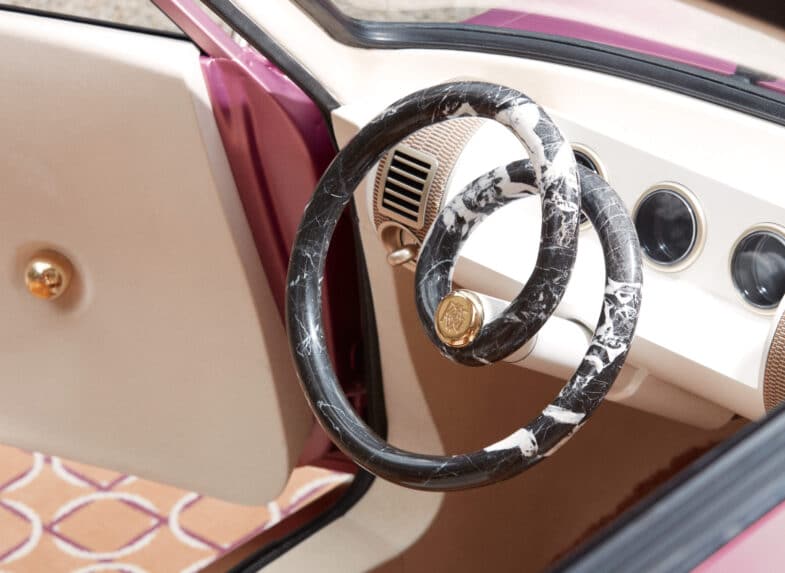 It’s the turn of François Farion, Colors & Materials Director of Renault to tell us about the Renault 5 Diamant:

“The creative universe and the personality of Pierre Gonalons and his collaborators are part of the flagship of French craftsmen, giving an innovative result and elaborate in detail. For me, the Renault 5 Diamant is first of all the emotional shock of the exterior colors which give the car a look that is both naive and sophisticated, and the attention to detail brought by Pierre, who is very sensitive to the references and the meaning of each element. »

As mentioned above, this is not the first time that a Renault 5 has been “retrofitted”. Without knowing the technical specifics of its electric motorization, we nevertheless know that it is an R-Fit kit. The Renaut 5 Diamant is also modern technologies: fingerprint device to open its doors, smartphone connectivity and digital instrumentation with 3 counters. 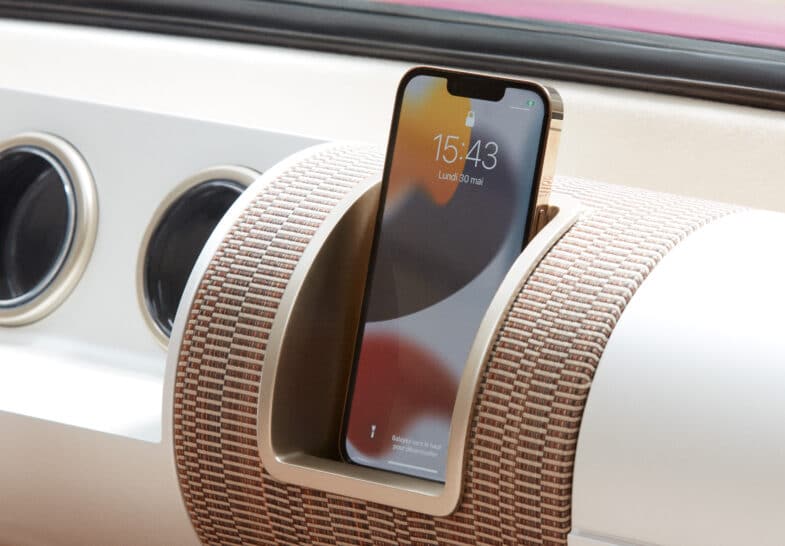 Finally, what future for this unique retrofit of this Renault 5 Diamant which was unveiled today during an evening organized at the Nissim de Camondo museum? It will be sold, at the end of 2022, at auction in NFT. Proceeds from this sale will be donated to “Give Me 5” which, according to the Renault press release “is a new brand social responsibility project dedicated to younger generations. »

Renault 5 Diamant: “electric jewel” for the 50th anniversary of the R5