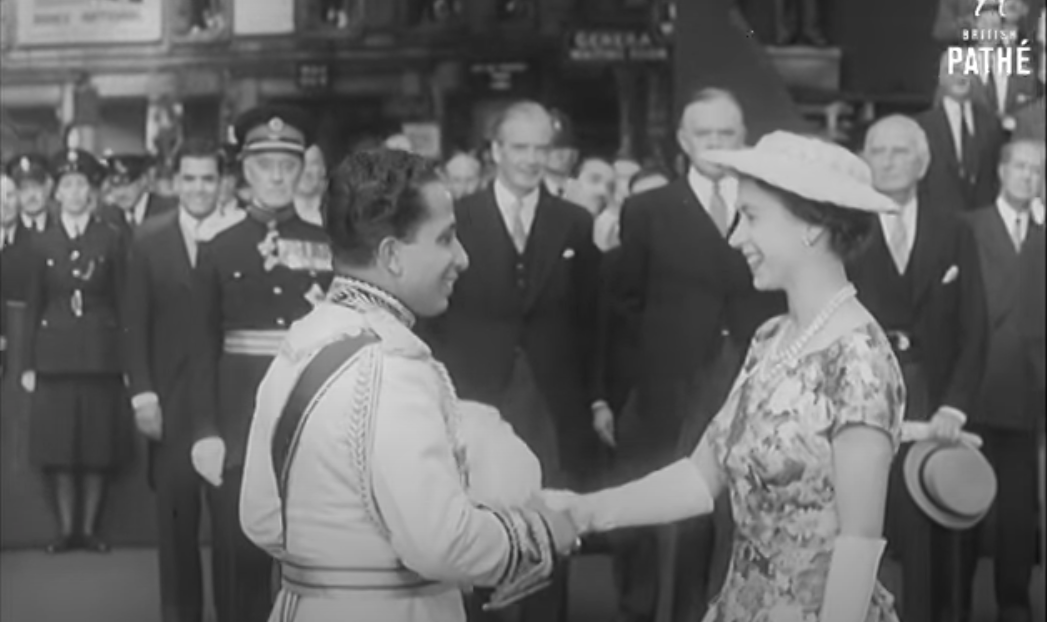 Queen Elizabeth II with King Faisal of Iraq during an official visit in 1956. London-Victoria station. Screenshot from a video by British Pathe. Fair use.

This article is written by Nasser Rabbat, guest author and director of the Aga Khan Program for Islamic Architecture at the Massachusetts Institute of Technology (MIT).

The death of Queen Elizabeth II, September 8, 2022, is presented in Western media as the end of an era. The relentlessness of this mantra in the media is an exaggeration, to say the least, except perhaps for fervent royalists in the UK, and Anglophiles, mainly wealthy citizens of the Commonwealth. For the rest of us, the significance of his passing ranges from a pompous distraction, deliberately spread out over many days, to a reminder of the differences between today’s world and that of his ascension to the throne in 1952highlighting how inept and totally out of step British royal pageantry is.

The first reminder is particularly poignant for an Arab-born observer like me, navigating Western ways of thought with ease, but also steeped in criticism of their callous disregard for other non-Western perspectives.

More tragically, the reign of Elizabeth II coincides with the continuous dismantling of all the promising aspects of modernity within the Arab world – from political independence to economic prosperity, including emancipation and social stability.

Elizabeth II is obviously not personally responsible for these incidents, which should be fairly and honestly blamed on the Arab regimes and peoples and their unbalanced handling of the challenges they have faced over the past 70 years. But his person symbolized the colonial world order which, though in decline upon arrival, had already trapped not only the Arab populations, but all of the developing countries of the southern hemisphere, in its extremely unjust distribution of power, knowledge and wealth. Players have changed many times, but the devastating grip of global inequality has endured, almost unscathed.

Britain’s interference in the Mashreq Arabic is ancient (the Maghreb was resolutely ceded to the French). In 1190, a distant predecessor of Elizabeth II, Richard I (Coeur de Lion, reigned from 1189-99) leads the third crusade in Sicily, Cyprus and on the coast of Palestine with mixed results which nevertheless ensured him eternal fame.

The military incursion next in Arab lands takes place in 1801 when the British land in Egypt to force the withdrawal of the French and restore Ottoman rule there. The British reaped enormous economic and geopolitical benefits from their maneuvers around of the crumbling Ottoman Empireseizing outlying territories such as Aden, which passes under the rule of the British East India Company in 1839.

But the rise of a modernizing dynasty Egyptian locality required urgent intervention in 1882 to secure both the financial and navigational benefits offered by the opening of the Suez Canal. The British occupied Egypt until 1954.

Sudan, conquered by an army joint Anglo-Egyptian in 1898is the next.

Meanwhile, Britain is also extending its colonial hegemony to the Gulf emirates from Kuwait to Oman, binding them in treaties that effectively erase their independence.

At the end of World War I, the Ottoman Empire collapsed and the European colonial powers are rushing to swallow up its Arab provinces. Britain, betraying its Arab allies who had been promised an independent Arab state, won most of the Mashrek territories, notably Iraq and Trans-Jordan, where it installed two tributary Hashemite dynasties, and Palestine, destined to be stripped of its name, its identity and its people.

This British imperial plan, illustrated by the absurd Balfour Declaration of 1917 promising what was still Ottoman Palestine to the Jewish people, proves disastrous not only for the Palestinians, who lose their country after the creation of Israel in 1948, but for the entire Arab region. It severed the territorial relationship between Egypt and the Mashreq, stifled genuine liberation and created an environment hostile to modernity and democracy.

During the reign of Queen Elizabeth II 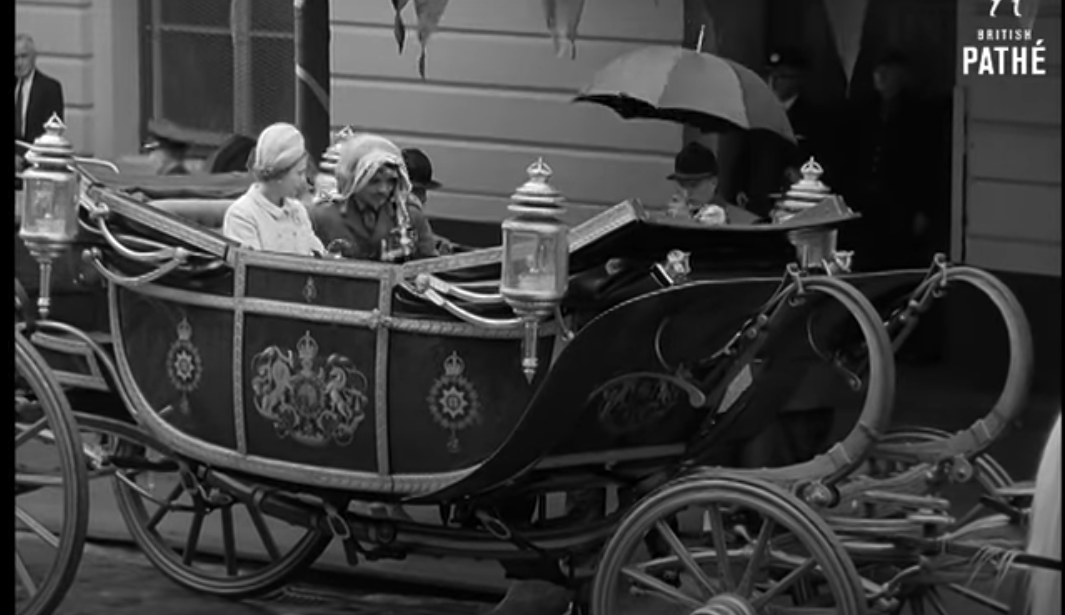 Queen Elizabeth II in the carriage with King Hussein of Jordan during a royal welcome in 1966. London. Screenshot from a video by British Pathe. Fair use.

The flaws in this imperial policy began to appear shortly after Elizabeth II’s accession to the throne, when the Free Officers movement in Egypt staged a coup against their king in July 1952 and establishes what they claim to be a republic geared towards progress and political sovereignty. That they ultimately botched their project due to inexperience and political greed in no way diminishes the role that the UK and the West, in general, played in giving these incompetent leaders more rope to strangle their nation.

The hasty nationalization of the Suez Canal by Abdel Nasser in 1956 leads Tripartite Aggression of the United Kingdom, France and Israel, revealing the military and strategic weaknesses of the Egyptian regime despite the retreat of the invaders. Subsequently, the United States imposes a new order that pushes the United Kingdom to last place in Egyptian affairs, but not without multiple attempts to regain some influence.

Another stage of the competition between the United Kingdom and the United States in the newly independent Arab States; Syria, which suffered a series of Western-orchestrated military coups between 1949 and the rise of Hafez al-Asad in 1970. A number of these coups were reportedly coordinated with the British Secret Serviceparticularly in the 1950s, when growing pan-Arabism threatened UK-allied conservative regimes in Jordan, Iraq and some of the Gulf emirates.

Allegedly mapped on a napkin by the indomitable Gertrude Bell, at a cocktail party in the mansion of a British high commissioner in 1918, Iraq has also suffered from foreign interference throughout its modern history. The last episode, when the country was occupied by a US-led coalition in 2003, is particularly devastating. The United Kingdom, probably nostalgic for its colonial era, claims the southern governorate of Basra as its stronghold. Elsewhere in the Gulf, British expats and businesses dominate many economic sectors in wealthy city-states, from Kuwait to Oman. Yemen in the past Happy (the Arabia Felix of the Romans), whose southern half was for more than a century a British colony, is now in the throes of a schizophrenic civil war, fueled by geopolitics and the misguided dreams of grandeur of its invaders. .

So why should locals remember Queen Elizabeth II as anything other than the uptight, terrifyingly conservative figurehead of a waning empire that she really was? In fact, his passing could usher in not the nostalgic end of an era, but the promising start of a new era for the British monarchy’s relationship with the Arab world. His son and successor, Charles III, always showed a strong interest and appreciation for Islam, Sufism, Arab culture and architecture.

These intellectual affinities, if properly redirected, could result in a real rapprochement with the Arab world. But that will depend not only on the will of the new king, but also on his ability to navigate the restrictions of his constitutional monarchy and transcend the lingering prejudices of Orientalism, colonialism and xenophobia.