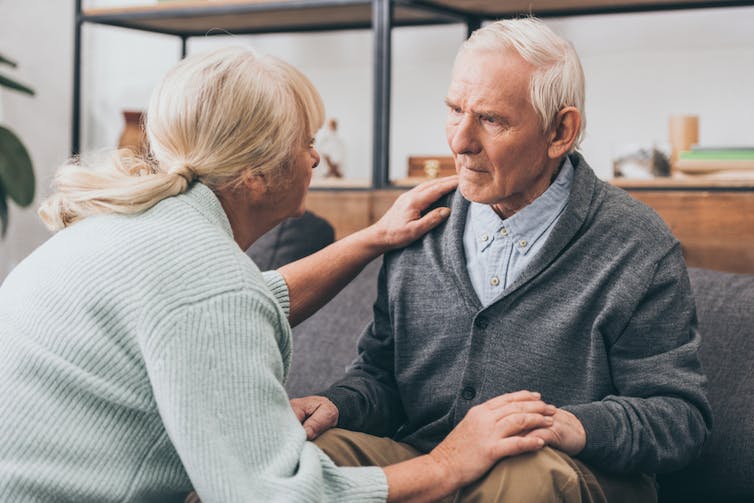 We spend a third of our life sleeping. And a quarter of that time is spent dreaming. So, for an average person living in 2022, with a life expectancy of about 73 years oldthis represents a little more than six years of dreaming.

Yet despite the central role dreams play in our lives, we still know very little about why we dream, how the brain generates dreams, and most importantly, what they mean for our health – especially our brain health.

My latest study, published in the eClinicalMedicine Journal of The Lancet, shows that our dreams can reveal a surprising amount of information about our brain health. Specifically, it reveals that the frequency of bad dreams and nightmares (bad dreams that make you wake up) in middle or old age may be linked to an increased risk of developing a dementia.

In this study, I analyzed data from three large US health and aging studies that included more than 600 people aged 35 to 64 and 2,600 aged 79 and older.

None of the participants had dementia at the start of the study, and they were followed for an average of nine years for the middle-aged group and five years for the older respondents.

At the start of the study (December 2002), participants completed a series of questionnaires, including one that asked them about the frequency of their bad dreams and nightmares.

I analyzed the data to determine whether participants having nightmares more regularly at the start of the study were more likely to experience cognitive decline (a rapid decline in memory and reasoning skills over time) and be diagnosed with dementia.

I found that middle-aged participants who had nightmares every week were four times more likely to experience cognitive decline (a precursor to dementia) over the following decade, while the likelihood of being diagnosed with dementia was twice as high among older respondents.

Interestingly, the link between nightmares and possible dementia was much stronger in men than in women. For example, older men complaining of nightmares on a weekly basis were five times more likely to develop dementia than those reporting no bad dreams. In women, however, the increased risk was only 41%. I observed a very similar pattern in the middle age group.

Taken together, these results suggest that frequent nightmares may be one of the earliest signs of dementia, which may precede the development of memory and reasoning problems by years or even decades – especially in older adults. men.

It may also be that recurrent nightmares and bad dreams can contribute to the onset of dementia.

Due to the nature of this study, it has not been possible to determine with certainty which of these theories is correct (although my suspicions relate to the first). However, whichever hypothesis turns out to be correct, the major implication of the study remains the same, namely that regularly having bad dreams and nightmares in middle and old age may be linked to a increased risk of developing dementia later in life.

These results suggest that treating nightmares may help slow cognitive decline and prevent the onset of dementia in some people. This will be an important avenue to explore in future research.

The next steps in my research will be to examine whether nightmares in young people may also be linked to an increased risk of dementia. This could help determine if nightmares cause dementia or are just an early sign in some people. I also plan to study other characteristics of dreams, such as how often we remember our dreams and how vivid they are, to establish the likelihood of developing dementia in the longer term.

This research could not only help shed light on the relationship between dementia and dreaming, and provide other possibilities for earlier diagnoses – perhaps even quicker interventions – but it could also shed new light on the nature and function of the mysterious phenomenon we call the dream.