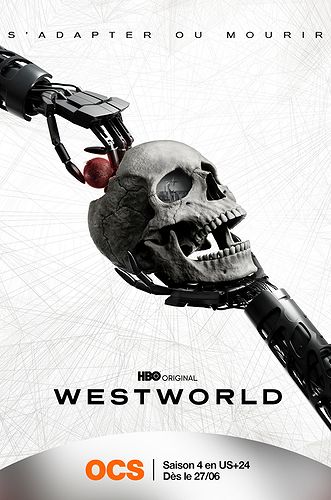 Each season of Westworld is constructed as a chess game; that is to say that they are built in three stages: the strategic Opening, the middle game and the duel of Kings. In this context, the first two episodes serve as the opening game. Thus, the first two hours show the deployment of pieces and pawns by great antagonistic forces among which figure Dolores Wyatt – via William and Delos.

First of all, the first episode was an inventory of the positioning of each character and showed the first opening movement – ​​that of William and Maeve. This first movement made it possible to highlight the objective of the season.

A good story requires a clearly identified and stated objective towards which all the characters converge. That of the season, even of Westworld, is survival. And this one passes through a key which opens the doors of a parallel dimension called “Sublime”.

On the one hand, it constitutes a salutary Garden of Eden for robotic consciousnesses. On the other hand, it is the key opening the door to immortality for human consciences.

Secondly, continuing the metaphor of the game of chess, the 2nd episode continues the opening with the first synergies between the materials (Pieces, pawns) of each camp, which will progress on the Westworld / Futurworld chessboard.

These first encounters and connections are an opportunity for the showrunners to begin giving depth to the plot, given the time jump (8 years) with the last season. The narrative bias of ignoring the anti-Roboham civil war needs to be justified, although there is no indication that this war is not explored later.

Indeed, the title “the augurs” of the first episode recalls one of the great narrative signatures of Westworld : more timeline overlap within seasons. During ancient Rome, augurs referred to priests who specialized in the art of divination, that is to say the art of reading about future events.

In addition to the timeline, for the story to really take on depth, the objective, necessary for the narration, is at the service of a guiding principle. That of Westworld deals with the free will of all conscious life forms.

Superbly treated in the first two seasons, this one was more withdrawn during season 3 in favor of a more anarchic, conspiratorial and survivalist subject close to the themes of the terminator Cameronian, with a touch of fight club. Still back, Westworld would benefit from weaving its narrative arc around this guiding principle in order to correct the pitfalls and shortcomings specific to the 3rd season.

If at the narrative level, the first episode served as an inventory of the forces present, the second hour brings a movement that advances the story by opening sub-plots that announce a beautiful pop and skirmishes.

Given the pace of Westworld, the strategic opening will surely end in the 3rd episode, the aim of which will be to prepare the mid-game. In chess, the middle game includes duels and altercations between the opposing forces to obtain central positions with exchanges and sacrifices – necessary to better attack the opposing King.

At Westworld, a state-of-the-art amusement park, visitors pay a fortune to relive the thrill of conquering the West. Dolores, Teddy and many others are human-looking androids created to give customers the illusion and provide a change of scenery. For the latter, Westworld is an opportunity to give free rein to their fantasies. This well-oiled universe is put in jeopardy when, following an update, some robots begin to adopt unpredictable, even erratic behavior. Behind the scenes, the team, which pulls the strings of this alternative world, worries about these incidents more and more numerous. As the stakes of the Westworld program are so high, the Management cannot afford bad publicity which would scare away its customers. What really happens with re-encoded androdes?