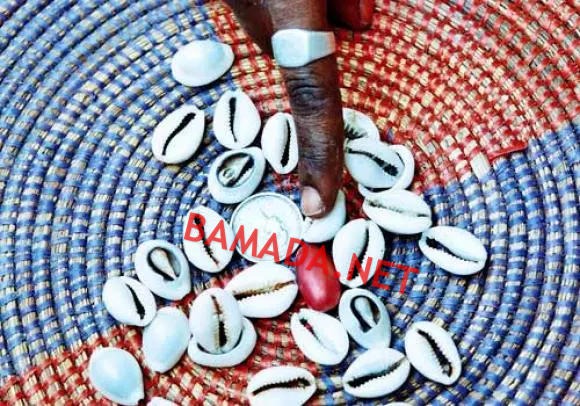 The cauri is a divinatory art used most often by women. To solve this mystery, we spoke with Dr. Fodé Moussa Sidibé, traditionalist. According to him, the cauri, generally feminine divination, was important in our society. It still is, but not like before.

Mali-Tribune: What is the cowrie?

Dr. FMS: The cowrie is a mollusc. It has been introduced to us for millennia. It is white in color and its shape is weird. A bizarre shape reminiscent of the female genital organ. This is very important to note, because it is from there that the African symbolism linked to cowries is born.

Now, as regards its history, as I said earlier, its history is lost among us in the mists of time. Because the cowrie was used as currency and that too long ago because it is what is rare that becomes currency.

The thing that is rare like gold. But, at that time, the value of the cowrie was backed by gold. It was gold that was the basic measure and the places where there is a lot of gold, the cowrie cost nothing. I can’t say if the symbolism preceded the use or if it was the use that preceded the symbolism side. In any case, utilitarianly, it was a currency and utilitarianly, too, it was used for divination.

Mali-Tribune: How many cowries for divination ?

Dr FMS: Usually 12 cowries are used. But, there are some who go up to 48 cowries for divination. It is a totally feminine divination. But, there are men who use it too. But, it is still an object of divination that belongs more to women than to men. Even the use of the cowrie in spirituality is linked to women, because you are asked to sacrifice 3 or 4 cowries.

Moreover, until now, there are geomancers who ask to be symbolically paid in cowries.

Mali-Tribune: What are the differences between the cowrie of yesterday and today?

Dr FMS: Nowadays, the cowrie has lost its luster. It is no longer the currency of trade. Now no one uses the cowrie to pay except in certain rituals. With some, you pay symbolically with cowries, but after that it’s up to you to see how much money you can bring.

The man who wears a cauri is generally on his left ear and refers to “koukeni”, one of the most dangerous fetishes in the Bambara milieu. Koukeni means, koloni kelensingle cowrie.

Mali-Tribune: What is its use?

Dr FMS: The cowrie in a utilitarian way serves as an ornament. But, contrary to what we see today, even as an ornament, it was not worn at random.

Women could wear it in their hair or as a neck pendant for certain well-defined circumstances. The number is known. We do not exceed the number. Well, it’s usually feminine numbers.

With us, numbers are also gendered. There is gender in all African countries. Nobody taught us gender. There are male numbers, female numbers. For men, the use is generally in ceremonial outfits, in stage outfits, for certain dancers, for certain types of shows.

Among the donzos, we have a number of cowries on the outfits. The number is determined by the rank and status of the hunter.

Mali-Tribune: Who are the people able to predict through the cowries?

Dr FMS: Women, very rarely, men. Generally, cowries speak only of women’s affairs. When you go to a good cowrie thrower, everything concerning your sentimental life, and even sexual, he will tell you everything. What makes men wary of it.

Mali-Tribune: Is the use of the cowrie learned or is it a gift?

Dr FMS: Well, the stories of donation, you have to be very careful. There are very few things that are innate in man. If you don’t learn it, you won’t know it. One does not come to any land with any knowledge. We come with skills and reflexes. Knowledge, knowledge are acquired.

Mali-Tribune: Does this art make money?

Dr FMS: I think that if people indulge in it, beyond the pleasure of getting together, there is a gain behind it.