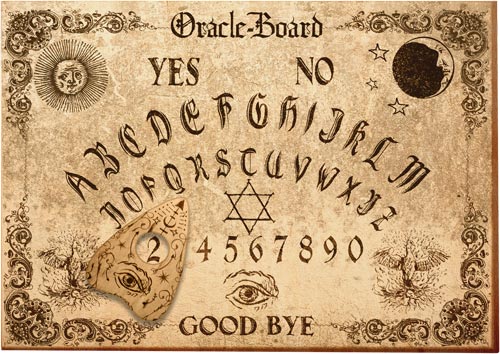 A wooden board allowing communication with spirits, the Ouija board is an object of parapsychology.

Object used by many believers in the supernatural and the paranormalthe Ouija allows communicate with spirits. The name comes from French yes and German yeabecause it isa first response given by a spirit when asked if it is there.

The Ouija board is a form of mediumship mainly used in parapsychology and little in occultism. Science classifies it as pseudo-scienceexplaining that the results given by the Ouija board often come from unconscious movements of whoever holds it.

His practice is often considered heretical and forbidden in some cults, linking it to witchcraft, Satanism. Especially since some mediums practicing it, explain that no one can predict what spirit may manifest. So, this one can be evil.

The Ouija is a relatively recent object sinceit dates from 1891, in an America still affected by the Civil War. His traces with these many deaths, bring the development of movements linked to spiritualitycommunication with the deceased.

Elijah Bond and Charles Kennard develop in this context the first prototype of a divinatory board. To create it, they are inspired by ancestral methods and American mediums. However, their company went bankrupt in 1892but the fers William and Isaac Fuld who were two of their employees take over to put it into production.

Nevertheless, William dismisses his brother and acquires the rights alone. He launches the production of the board and presents it as a children’s toy in order to receive state assistance. With the growth of spiritualism, in 1920 the object was a great success. William Fuld named it at that time Ouijataking a term given by a spiritualist before it is used. He leaves the name as well as various Divination board variations as lucky board. He thus ensures that he rules out all competition and dominates the market.

The Ouija board is a wooden board on which are engraved (or painted) the Latin alphabet, Arabic numbers, the words yes, no, hello and goodbye. We place over a glass or sharp object (appointed drop). The glass or the drop moves on the board controlled by the spirit, which in this way communicates with the living.

We start the session by asking “spirit are you there” and if this one manifests itself by answering Yes on the Ouija board. We can then ask various questions to which he responds, until he says goodbye and disappears.

The nature of mind can be detected by his behavior. If he answers zero at his age, if the glass or the drop tries to get out of the boardif he ddraw an eight in the center or if he point the corners of the boardthen it is probably bad.

Ouija, definition and origins of the table or divinatory board