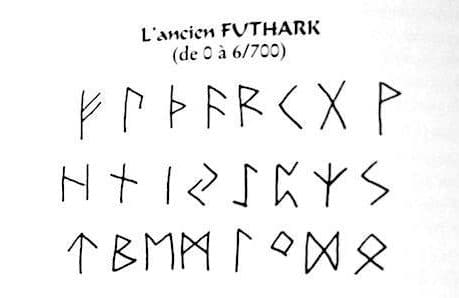 How to read the runes, these pretty pebbles with mysterious symbols that can introduce you to the divinatory arts?

I’ve been wanting to teach you a witch trick for some time now: reading runes.

I do not guarantee you to read your future thanks to this divinatory art but simply to learn more about yourself.

Runes are an alphabet of Germanic origin that appeared in the 2nd century AD.

Used by the Vikings and other Germanic and Scandinavian peoples, it is composed of 24 signs as follows:

It was also used in Celtic languages.

In this Anglo-Saxon culture, the alphabet, which is also called Furhbak, has expanded to 36 letters.

All have their own meaning.

The word rune has an unknown etymology in the Latin languages and it is difficult to conceive of a true translation.

It exists three different Furhbak and each represents an era, as Eric Panichi, author of the book Dialogue with the runes kindly lent me my colleague Élise (do you know her Youtube channel?).

The runes in the divinatory art

No one really knows the origin of runes in Celtic and Germanic culture.

Historians suspect thatthey have a connection with Norse mythology but it is still difficult to understand the original use of these stones.

In modern witchcraft, runes are part of the divinatory arts (with the tarot, and the oracles for example).

They serve to guide you in lifeto reflect on you, on a situation and perhaps even lead you on paths of reflection that you would never have thought of taking one day.

So I’ll stop you right away, I’m not explaining to you that it’s possible to talk with pebbles.

Manipulating the runes, in my opinion, rather means to interpret their signs to better analyze your functioning of thoughtreassure you about certain aspects of life, help you make a decision by taking a step back from the situation.

It’s about a matter of beliefit’s up to you to choose whether you want to give importance to it or not.

How to read the runes?

Each rune has its own meaning, its own message. They are all attached to an element, an idea or a concept.

You have to understand them according to your emotions, your life experiences and your personality.

You need a guide that allows you to understand the meaning of each letter.

You can choose a manual that you will find in an esoteric literature store, or on the Internet (I am thinking of this kit in English Etsy, to Eric Panichi’s guide on Amazon Where this manual available on Fnac).

Obviously, you have the choice to turn to the Internet.

I unearthed this site which sums up summarily each meaning of runic symbols.

For a more guided interpretation, there is this blog page quite well done.

Make your first draw of runes

Before each draw it is important to refocus on yourself for a few moments.

You are about to start an introspectionit is necessary to be calm.

This is valid for the tarot, the oracles. You will not read very conclusively if your mind is parasitized by negative thoughts.

I’ll tell you how to do it a simple draw with three runes.

Read also : I am a Wiccan witch — Testimonial

Read the runes: a draw with three stones

This draw will allow you to answer a question by analyzing your present, embodied by the first stone drawn, your past, which is equivalent to the second rune, and your future, represented by the last pebble removed.

I promise, it’s much easier than it looks!

Once you feel ready or ready, grab your bag of runes and fire three without looking.

Arrange them side by side and open your eyes.

Flip the ones that are face down and place them right side up.

You must now remove your “synthesis” which will give the overall structure of your draw. Imagine it’s the conclusion of a dissertation.

The synthesis is calculated: it is necessary to add the numbers corresponding to the location of the runes in the alphabet.

If you roll less than 24, remove the rune with the equivalent number from the bag.

If the end result is more than 24, subtract by the number of letters in the runic alphabet (which is 24, do you follow?).

Here you have your summary.

I drew my three runes which are thurisaz, berkano and sowilo.

The first stone is the third in the alphabet, the second the sixteenth and the last the eighteenth. By adding 3+18+16, I have 37.

So I’m looking for the thirteenth letter of the runic alphabet: ewaz.

The interpretation of the drawing of the runes

I will continue my example.

My past is represented by thurisazmy present by berkano and finally my future by sowilo.

As I do not yet know the runic alphabet and the equivalence of each letter by heart, I must bring my book or an index found on the Internet and with which I am comfortable.

Runes are not an exact science, interpretations and translations vary.

It’s up to you to choose the ones that suit you the most.

What my rune draw says about me

Back to our pebbles.

The letter thurisaz means, according to Eruc Panichi author of Dialogue with the runes“the giant, the strong”.

I think it’s a question of strength but also of struggle, offensive and/or defensive.

The letter berkano is a symbol of creativity, fertility and means “mother goddess”.

The themes of birth or rebirth, mutation and creation are to be kept in mind.

Sowilo, my last rune, encompasses the concept of victory and enlightenment.

It can be releaseof new ideasof a understanding or a new way of looking at life.

In short, what do the runes say?

Here is my interpretation of this draw: in the past, I faced obstacles that prevented me from moving forward, I fought to get out of situations where I was unable to flourish.

It paid off because today, I am in a new dynamicI take a new start, I am reborn in a way.

For the future, I have little to worry about my ideas and my desires: they will flourish and flourish.

It will be a kind of victory over my past struggles.

Summary of the draw

She symbolizes the death or transformation.

In the runic translation it is the “Sacred Tree of Odin”. We are on a very strong symbolism.

I quote the advice of wisdom expressed by Eric Panichi which, I think, sums up my draw well:

“To discover new horizons, you have to agree to leave… To be reborn to a new life, one must agree to die to oneself. »

Tip: take a notebook to keep track of your draw.

It’s up to me to interpret all this according to my ambitions, my immediate and long-term desires.

Should I give up my life in Paris surrounded by my loved ones for new adventures?

Or should I try new experiences even if it means leaving behind certain projects that are close to my heart?

This is something to think about for the next few weeks.

Did you know the runes? Would you like to learn to read them to get to know yourself better?

Learn to read runes, the divinatory art from the Vikings