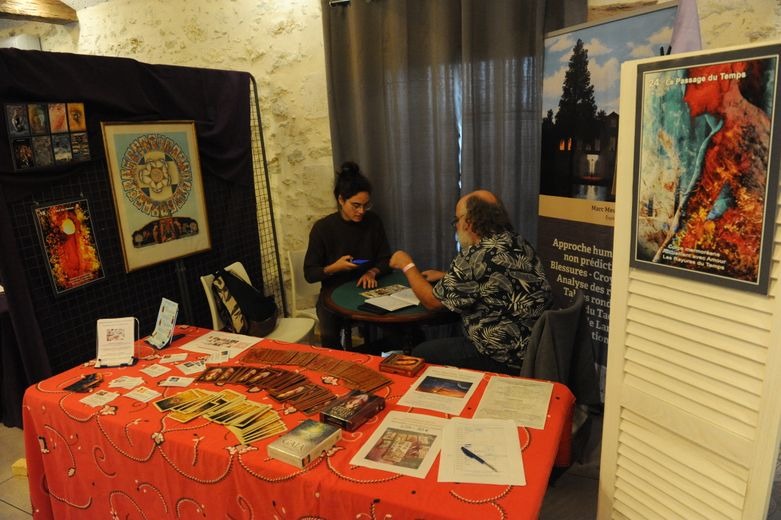 the essential
The Tarot Festival has made a comeback, this time in Auch, from September 23 to 25. Far from cartomancy, the practice is becoming more democratic around personal development. Reportage.

You had to come early to hope to get a place in the parking lot of the Castagné estate in Auch this Saturday. The place hosts for the first time the “Tarot festival”. Since this Friday, September 23, conferences, workshops and activities are offered there around the Tarot. The event was created in 2018 by Fabienne and Judith, two friends passionate about cards and esoteric tarot. For its 4th edition, the festival has moved from Saint-Martin-de-Goyne to Auch. Unique in France, the event brought together hundreds of people this Saturday.

“The place was chosen because it offers a lot of possibilities and spaces for activities”, confides Mathilde, volunteer on the festival. Only, on the strength of its success, the rooms where conferences are held with renowned tarologists in the field fill up quickly. “People came from all over France and even from Canada,” says the organization. But why this craze around the Tarot? The origin of this type of card remains relatively unknown. However, it was not until the 20th century that the tarot was truly democratized.

Used to play more traditional games, tarot cards are also known for more occult use. In a more modern approach, the creator of the festival, coach and trainer in tarot, Fabienne Larnicol wished to sweep away the popular a priori on the practice. “The tarot as a support for divination with the fortune-teller in her caravan: the idea of ​​the festival is to show that we can do something else with the Tarot”, underlines the organizer.

“Anyone can become a tarologist”

A real tool for personal development and reflection, the tarot has been democratized in a dazzling way. Tarot of Marseilles, tarot of Rider Waite… Several types of cards and several editions to allow an awakening of conscience.

“When we draw a card, I will explain what it represents […] rigidity for example […] the person will then be led to talk about something they don’t necessarily think about, about their life”, explains Emmanuelle Iger, tarologist and godmother of the festival. She specifies, however, that if the practice remains accessible to all, it is however necessary to have certain prerequisites “It is necessary to have some knowledge of psychology, to have a good memory too and to know the universe of the tarot”, she specifies

Far from predictions about the future, the tarot remains a tool for questioning. The playing cards, also called “arcana”, meaning “hidden, secret, mysterious” thus compose the tarot helping to reveal what is hidden deep within oneself.

Gers: full box for the 4th edition of the Tarot Festival in Auch