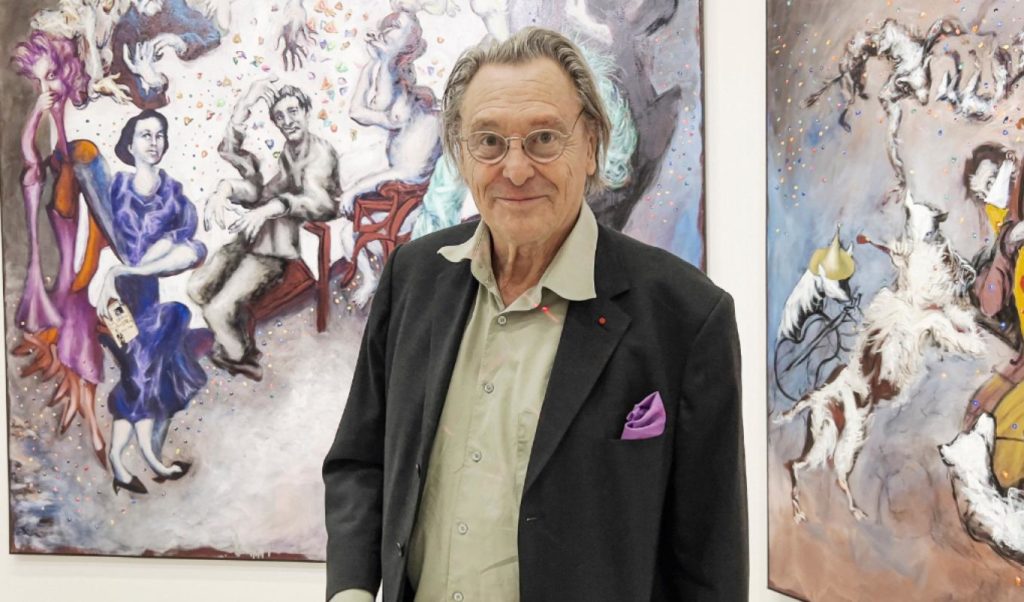 At the heart of a retrospective at the Center Pompidou, the second since 1988, the painter Gérard Garouste exhibits his conception of art as a game of signs and interpretation, where the viewer is at the center of the creative process.

Gérard Garouste is wary of qualifiers. “Artist” doesn’t really suit him, and he calls himself a painter only because he makes and sells paintings. Rather, it invites a shift of attention to interpretation, independent of style. Because all art is, according to him, in the eye of the “watcher”. He borrows this idea from Marcel Duchamp, whom he read carefully before departing from it. Renewing interest in figuration in an era won over by abstraction, he borrows his motifs from literature (Cervantes, Dante, Rabelais, Kafka, etc.), philosophy and biblical texts, which he brings into dialogue and sometimes clash.

“Intranquille”, he made doubt a motor of creation, in the footsteps of the interpreters of the Talmud, which he studied with the philosopher Marc-Alain Ouaknin, and… of Nietzschean “perspectivism”: there is no fact, only interpretations. Beginning at the end of the 1970s and ending today, the itinerary of the exhibition dedicated to him by the Center Pompidou, designed by the exhibition curator Sophie Duplaix, thus takes the form of a labyrinth where the mysteries and riddles. Gérard Garouste agreed to guide us there, by answering our questions.

You guide the visitor in this exhibition via a short personal text inscribed on the walls, where it is a question of a “dark palace”. What space do we enter when crossing the threshold of this retrospective?

Gerard Garouste: First, my tables are always linked to each other. There is even a series called zeugma. The Greek term (ζεῦγμα) designates the “bridge”. Zeugma was a town in Syria, on the banks of the Euphrates, which a famous bridge spanned. It joined the other side of the river and collapsed, but the idea remained of the link between the two cities, of an absence that links two things. It persists in the figure of speech of the same name – like ellipse, the zeugme consists in bringing together under the same word two disparate terms. The whole exhibition is based on this perspective: the presence of an absence that connects the paintings is more important, in a way, than the paintings themselves. What counts is the link made by the viewer. From one exhibition to another, the hanging changes. The curator of this exhibition, Sophie Duplaix, has therefore made connections, according to her own “magic”. She knows my catalogs but she has pinned free associations of thought, as if the paintings were words she was arranging to write a story.

“At the Beaux-Arts, no one knew how to paint, and both the students and the teachers thought they were brilliant”
Gerard Garouste

What is this story?

I’ll tell you the gist. When I was young, I was good at drawing and painting, it was the only thing I didn’t do badly. It was logical that at some point, I returned to the Beaux-Arts. I would have loved to enter there as in a music academy or a conservatory, where one would learn music above all before having all the life to be brilliant. But the workshops were of little interest. No one knew how to paint, and both the students and the teachers thought they were brilliant. Learning to paint first consisted for me of going to see paintings in museums. Then, I received a kick in the stomach with the publication in 1966 of a book of interviews with Marcel Duchamp, conducted by the critic Pierre Cabanne. We were already in an iconoclastic era – artists like Picasso, Matisse, Léger, Miró competed in originality. But with Duchamp, the problem was no longer originality. He called into question the very idea of ​​an artist, considering that “it is the viewer who makes the picture”. He was thus able to put a urinal in the middle of a gallery and call it a “fountain”. For me, who loved painting, this posed a serious problem. Was this the end of the painting? Some, at that time, had completely abandoned it. The Franco-Swiss artist Ben had given up on it, he was only writing, white on black. In one of his quotes, he noted: “Absolutely anything is art, including the space between your toes”. I took this quote at face value: if art is everywhere, where is it? Nowhere ?

Yet you now embody the revival of figuration. How does one come back from such an awareness?

My obvious reaction was to tabula rasa, taking everything back to its roots, from the history of art and philosophy. If I am a painter, what is a painting? What is a subject? Nicolas Poussin had already conducted this investigation, traveling to Italy to do research on painting, on the nude, the mythological scene, the landscape… He had settled in Rome, had studied in a Baroque school and attended dissections to learn human anatomy. I went on my own adventure, starting with a clean slate.

“If I am a painter, what is a painting? What is a subject? I set off on an adventure, starting with a clean slate” Gérard Garouste

What is a subject in painting, according to you?

My first subjects, presented at the beginning of the exhibition, were at first more or less personal myths. We see constellations, allusions to Greek and Latin mythology, personal legends… And at some point, everything changes. The process of painting scenes, telling and illustrating stories, as one could do in the Renaissance, learning from them, leaves room for questioning. I approach obscure themes with a figurative and narrative style. I bring together different stories and clashing patterns to create an enigma. We can think that the words are there to stage a story; one can think on the contrary that the stories have interest only for the words which they put in scene. We then switch to words. We can thus read the Bible in a literal way or consider that it is only a subject of interpretation. Beyond his comic dimension, Rabelais – to whom I am devoting an installation in the exhibition, La Dive Bacbuc – had knowledge of Kabbalah, and he reminded us of this: words are flints that we strike against each other. others, and it makes sparks. It’s a beautiful metaphor: the sparks produced are not synonyms or homonyms, they are other meanings born from the words involved.

Is it a metaphor for creation?

A metaphor in any case of the creation of language. The Bible is written in Hebrew, which is a very particular language, the construction of which corresponds to this explosion of meaning of which Rabelais speaks. Bible stories, by themselves, are ultimately of little value; to touch the real subject, it is necessary to produce interpretations, beyond the literal meaning: in Paradise, Adam walks around naked and meets a snake… So what? What is interesting is the word for snake – nahash (נחש). In Greek mythology there are many animals, but they are always reduced to human character. The donkey is a stupid animal, the lion is a king, the fox is clever… In the biblical text, the animals are not there for what they are, they are there for the way they are written, their spelling . Nahash thus means snake but also divination. The donkey – chamor (חמור) – designates the donkey but also evokes “matter”. We can therefore interpret the arrival of the messiah on a donkey: it is the spirit that dominates over matter. The study of the Talmud gives this fascinating opening because we are at the heart of the language. It is a way of seeing a founding text, mythological or religious, as a philologist like Nietzsche did, preferring “innumerable meanings” to unequivocal truth, interpretation to facts alone.

You often say that painting does not interest you. Why ?

My job is to be a painter because I sell paintings. But art is only a means and my concern is not painting. Painting has nothing to do with representation, it has the advantage of being like a dream: it is not because we tell a dream that we have an explanation or an interpretation of it. I make a painting, of which I have a vague idea. We can discuss the interpretation. But the painting belongs to whoever looks at it. The way in which you have seen my paintings is undoubtedly very different from what I could have imagined, me who made them. And you are right!

“Only fascist thoughts are in the ‘truth’, without ever doubting” Gérard Garouste

Would you say that painting is a quest for truth or for the absolute?

The poster shows me as Pinocchio. We can say that painting is a performative contradiction. By painting what does not exist, the painter says: I am a liar. And so he lies, saying it. So is he telling the truth? This is the liar paradox.

Is it therefore fundamentally an art of trompe-l’oeil?

It is a question of being not fooled, knowing that we will always escape the essential anyway. Only fascist thoughts are in the “truth”, without ever doubting.

What do you discover about yourself at the end of such a retrospective?

I have assurance – assurance, not certainty! – to be on the right path… but like Virgil, at the beginning of Dante’s Divine Comedy, on a dark path, “because the straight path was lost”. I often repeat this other quote that Marc-Alain Ouaknin taught me, with whom I study: “Never ask the way to someone who knows it, you risk not getting lost”.

The Gérard Garouste retrospective runs until January 2, 2023 at the Pompidou Center in Paris. More information on the official website of the exhibition.

Gerard Garouste. A painting belongs to whoever looks at it – Tribune Juive