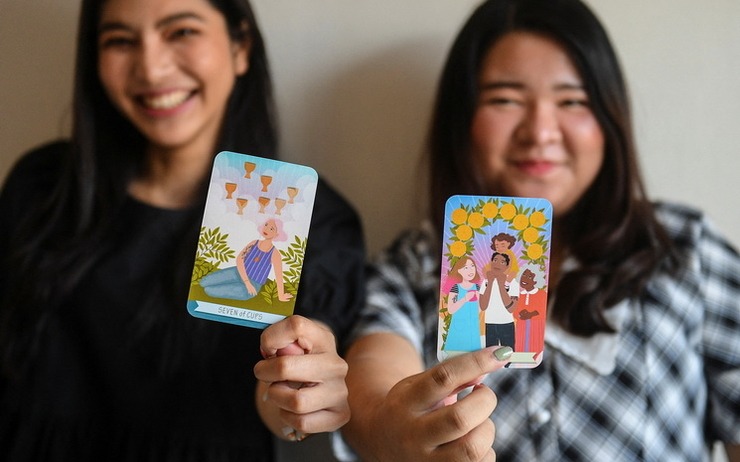 The stress caused by the Covid-19 crisis in Thailand has given a boost to the divinatory arts sector, which is developing strongly on the Internet and social networks.

Masters student Dhidhaj Sumedhsvast did not believe in clairvoyance or supernatural powers before the coronavirus pandemic.

“The pandemic has brought so many uncertainties that make us anxious“, explains the 30-year-old Thai student, who began by praying to Kubera, god of wealth in Hindu mythology also revered by Buddhists, to protect himself against the economic consequences of managing the pandemic.

“As soon as I started I felt safe. While others have been affected by the Covid crisis and have lost their jobs or income, I haven’t. So I believe in it more and more.”

Like Dhidhaj, many young Thais overwhelmed with anxiety are beginning to take up divination in one form or another.

With the pandemic, the typical Thai appetite for divinatory art and other magical objects that are usually found in the street has been invited on social networks of young people, allowing “mor doo” (fortune tellers ) to reach a wider audience.

“With a world like this, people need spiritual anchors“, says Pimchat Viboonthaninkul, an online-only fortune teller and co-founder, at 26, of Mootae World, a company that started the trend of tarot cards as wallpapers on phones last year.

Three out of four Thais believe in the supernatural

Thai culture is deeply impregnated with superstitious beliefs of all kinds, and tarot, astrology, numerology or the lines of the hand are obviously very popular forms of divinatory art in the kingdom.

78% of the Thai population believe in the supernatural according to a study carried out in 2021 by the Mahidol University’s College of Management (CMMU) – the French would be 1 in 3 or even 1 in 2 to believe it according to the polls.

From the advice of Feng Shui masters to magic tattoos and amulets blessed by monks, the superstitious beliefs of the Thai people nevertheless go hand in hand with the Buddhist religion whose syncretic nature has earned it a prosperous and smooth development throughout the world. ‘Asia.

A business of 137 million euros per year

Thailand’s divinatory arts sector, which is overwhelmingly in the informal economy, is believed to have generated around 5 billion baht ($137 million) a year since the start of the pandemic, compared to around 4 billion previously. according to A Duang, a startup whose divinatory services app has nearly half a million users, mostly between the ages of 18 and 30.

Its director, Kittikhun Yodrak, says the average basket per user has quintupled to 500 baht per month since the app was launched in 2019, before the pandemic.

This trend shows that the stress levels endured by the population have reached a “breaking point”, causing many to seek quick answers from someone else rather than themselves, believes Jomkhwan Luenglue, member of the Board of Trustees of the Thai Psychological Association.

“It is a first aid psychological aid“, she says. “But it risks compromising your ability to make decisions for yourself in the long run..”

Amulets in NFT and wallpapers

At the price of 249 baht (€6.85), each image is made to measure according to the astrological position specific to each client at birth, and also to their strongest aspirations, whether financial or romantic. .

Traditional Buddhist amulets – most often images of renowned monks or the Buddha in bronze, brass or gold – are also available as non-fungible tokens (NFT).

The Thai Crypto Amulets project has sold around 3,000 such NFTs at around 2,000 baht (€55) per unit on the Ethereum and Solana blockchains since its launch in 2021.

Each digital amulet is first printed on paper to be blessed by monks in the province of Surin, the center of the Buddhist amulet trade in Thailand, located 435 km east of Bangkok.

“We Used To Wear Physical Amulets Around Our Necks, But Now We Can Wear NFTs On Our Phones Too“says Crypto Amulets owner Ekkaphong Khemthong, who also collects traditional amulets.

The big brands believe in it!

The kingdom’s major brands recognize the potential of these new supernatural Thai entrepreneurs to reach this growing market of young believers.

Last month, Mootae World promoted Cigna Insurance to its subscribers, playing on the famous “bad luck year” of Chinese astrology, which falls when your sign corresponds with that of the current year.

“All brands want to exploit this market.”

Covid in Thailand explodes online clairvoyance and other crypto-amulets