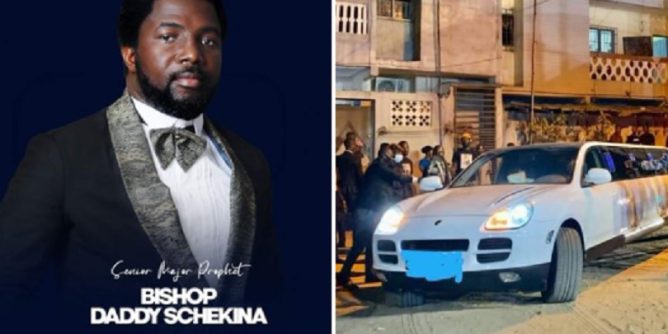 This boy weaves his web with two gigantic spaces in Abidjan. One in Bessikoi behind Angré, and the other at Km17 at the exit of Yopougon. This space is not yet built. For the moment, it is a huge tarp deployed, which can shelter 60,000 people according to those around the man. The purchase of this land must have required a large sum, given its size and its proximity to the city of Abidjan. The land is located some 30 meters from the Abidjan bypass highway.

Daddy Schekina also owns a huge property at Riviera III, which overlooks the lagoon. Apparently money is not a problem for the man. His procession consists of high-end and gleaming 4×4 (Range rover, Mercedes, porsche panamera etc……….). The acquisition of this last car in April 2021 sparked a controversy on social networks. While some spoke of pride, others saw in it the “blessing” of which man would be the object. Blessing from the Lord that we all pray? That’s what we’re going to try to figure out.

Every Sunday, buses transport hundreds of worshipers to the two spaces. Daddy Schekina is still a young man, although we see him with a full beard, he certainly wants to project the image of a mature man. Despite his relative youth, he inspires the respect of his peers. He says that his cults drain the world. And for good reason, the man makes ultra-precise revelations, with astonishing cures as a result, which can be viewed on his facebook page, his youtube channel, or his “miracle TV” TV channel. Is the Holy Spirit in action? or is this young man implementing “techniques” as some accuse him?

If the healings are indisputable, must we immediately conclude that they emanate from the Holy Spirit? When Moses’ staff turned into a snake in front of the pharaoh, the latter’s magicians did the same. It took Moses’ serpent swallowing those of others for it to be established that his source of power was superior. This fact shows that the camp of darkness has the ability to “reproduce” the miracles of the Lord.

Obviously at this stage no one is saying that daddy Schekina gets his powers from darkness. But it should not be affirmed on the basis of miracles alone, that its power emanates from the Light. Miracles do not necessarily attest to the presence of the Lord, for the simple reason that they can be “copied.” The source of power should interest us as much as miracles, because witch doctors also heal, drive out demons, make precise revelations. And indiscriminately, if they’ve got a Bible in their hand, you can get caught thinking it’s from God, when it’s from darkness. Swallowing acid thinking it is water will have no effect on the consequences that will ensue.

What is striking about the cults and crusades of Daddy Schekina is the absence of teachings. The Bible is set aside. The cults are entirely dedicated to healing sessions and revelations. Not a single verse is quoted to support it all. The name of Jesus Christ is mentioned in passing, often not at all, which ended up attracting attention. Taking this into account, the man has been practicing preaching for quite some time. But she is quickly dispatched, proof that preaching is not her forte. Jesus Christ taught more than he did miracles. Daddy Schekina does the opposite.

In the 80s and early 90s, famous healers operated in the Lakota region (Koudou Jeannot, Zérédji, Gbahe, Dago danger etc…..). From all over the country, buses brought thousands of people to their strongholds. In the face of criticism accusing them of being sorcerers, these healers brandished the Bible. This gave a stamp of respectability to their company. Yet they were unable to build a coherent and solid teaching on the basis of the verses they read. Time has shown that they were indeed sorcerers, who certainly fought other sorcerers, but who were none the less for that. They fought them with the same practices. Gradually they lost all credit, eventually disappearing from the landscape.

The fact that the miracles of Daddy Schekina are not followed by teachings, that no biblical verse is quoted during the healing sessions, leads us to establish a parallel with the sorcerer-healers of Lakota. An ex-sorcerer who has become a pastor will tend to use the “techniques” he knows. This shortcut makes it possible to achieve impressive results in a short time. But due to the absence of a life of prayer and meditation on the scriptures, he will be unable to teach his followers.

Today a number of young pastors operate on the same line as daddy Schekina. They don’t teach, they make ultra-precise revelations about the lives of the faithful, with astonishing cures as a result. Their practices are curiously identical, especially this way of blowing on the faithful and telling them that they are “cured”. It can be seen on the Super Box bouquet where the majority of religious community TV channels are. We also note that the majority of these “prophets” with superpowers are established in Benin, the homeland of voodoo. This should appeal. Have they moved from one cult to another while maintaining the same practices? You should know that the occult sciences are not fixed. They “evolve”, like the science that we experience in this world.

The mechanical nature of the revelations and healings, as if it were “fun”, raises questions about the true source of their power. Many women who used to be “komian fetishers” are now prophetesses. They do “wonders” with the sick. But what is the source of the healings?

The journey of Daddy Schekina

This course seems to be quite obscure. This boy was a cantor in a local ministry. He left for Ghana to take part in a crusade or a conference, and came back with the superpowers that we know today. What happened in Ghana? A story is told about him. He would have entered a room that the host prophet had strictly forbidden to visitors. On leaving this place, he would have acquired his super powers of healing, and his “gifts of revelation”, that is to say the ability to describe the past events experienced by a person. Has he been visited by an “angel”? Was he initiated without his knowledge? What really happened at this crusade? Only god knows.

For its detractors, the precision of the revelations is like divination, a practice formally forbidden by God. Many believe that he has access to the contents of the brains of his followers, by “downloading their thoughts”. In the Gospel according to John, Christ told the Samaritan woman that she had had 06 husbands. But he did not give the name of each of them, nor their place of residence, nor how she had met them etc….etc…. Whereas Daddy Schekina does it with disconcerting ease.

“because you saw me then you are cured” This is what he would have declared to a person who came late to one of his healing sessions, and who implored him to pray for her. Insurance? exceptional faith? or pride? He is almost seen as a demi-god by the faithful, many throw themselves at his feet as he passes. In principle he should correct this by constantly reminding that it is Jesus Christ who heals, he being only a channel. But apparently he doesn’t, and seems to take great pleasure in being seen as a “supernatural” being.

How to discern a real miracle, one that comes from the Lord

Miracles should not cloud our capacity for analysis, our discernment, as Jesus himself recommended. Today the confusion is great. We no longer know who the Lord is. The false prophets descended en masse into the place, and mingled with the true ones. Impatient to get rich, they only have regard for the offerings of the faithful, regardless of how the latter lead their lives. They are ready to speak of disbelief or reasoning when the slightest observation is made about their practices. But they forget that if we have a brain, it is to analyze and understand. This is the function of this organ!

It is not easy to identify them because the miracles look alike. But you should know that miracles and teachings are inseparable. Where we have miracles without teachings, or teachings without miracles, the doubt on the personality of the prophet is legitimate. Above all, one thing remains certain, time will eventually reveal the true source of the miracles of Daddy Schekina, and all those who operate on the same line as him. Are they on the side of Light or that of darkness? Time will certainly reveal it because time is the second name of GOD.

Bishop Daddy Schekina: The Holy Spirit in action or “techniques”?