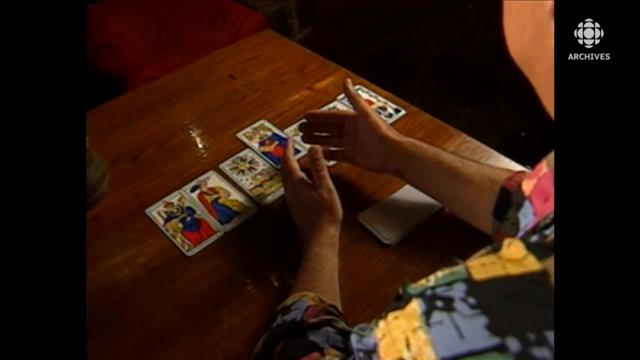 The Tarot de Marseille, a world of symbols

The first known tarot dates from the end of the 14th century. In 1392, a deck of cards was commissioned for King Charles VI.

The Tarot de Marseille is made up of 78 cards: 22 major arcana and 56 minor arcana.

For Georges Colleuil, professor of philosophy and psychotherapist, the primary goal of the tarot is not to read the future, but to take an interest in the future of human beings.

” It is a universal symbolism, because it is a catalog of myths, and the myth has this particularity that even if we have never studied it, we carry it within ourselves. It is somewhere inscribed in our most archaic memory. »

The 22 major arcana would represent the 22 letters of the Hebrew alphabet. Letters that are not just sounds, but universes on their ownsays this follower of the meaning of symbols.

Georges Colleuil, professor of philosophy, explains the Tarot of Marseilles and its religious symbolism. Directed by: Line Richard.

The tarot represents an initiatory journey, that of the character of the juggler, represented by the first card. A bit like the Little Prince of Saint Exupéry, he will meet on his way characters who will guide him. These guides, represented by the other major arcana like the Popess, Empress, Emperor and Pope, will teach her how to live her life.

” The tarot shows us what we can do with suffering and how we can transmute it to lean on it and move to another level of consciousness in some way. […] For me, the tarot is an image of the self, and the self already contains the whole world. »

Redesigning the Tarot de Marseille, one form at a time

In 1976, the graphic artist Yves Paquin was inspired by the tarot of Marseilles to illustrate his Ideographic Tarot of Kébèk. Drawings executed only with the help of compasses and squares in the manner of medieval picture-books and then screen-printed.

The graphic artist will take more than two years to create his game. He will win with his Ideographic Tarot the Prize for Graphic Designers in Paris in 1978.

On show woman of today of November 19, 1980, Yves Paquin presents to the journalist Minou Petrowski the particular technique used to achieve his 22 major mysteries.

Report by Minou Petrowski on the artist Yves Paquin who redesigned the deck of the Tarot de Marseille with a particular technique combining compass and square. The show is hosted by Claudette Lambert and Claude Ouellette.

All cards are created from a grid formed from circles, triangles, crosses and squares. The grid and its geometric shapes allow perfect symmetry between the elements.

As its creator explains, in the Tarot de Marseille, we must find a certain homogeneity, a neutrality in style.

Yves Paquin mentions that his favorite card is card number 1, that of the juggler, which represents the beginning, the beginning. This is the card he has spent the most time on, 200 hours of work. The fool, he is the one who decides to undertake a great worksays the artist.

For Yves Paquin, the tarot does not contain a negative card, even when he speaks of arcane number 13, death. The artist reminds us that we must always die in order to be reborn.

” Tarot is a way to better reflect on the answers we have, because in reality we already know all the answers. »

Archive | The origins of the Tarot de Marseille and its symbolism