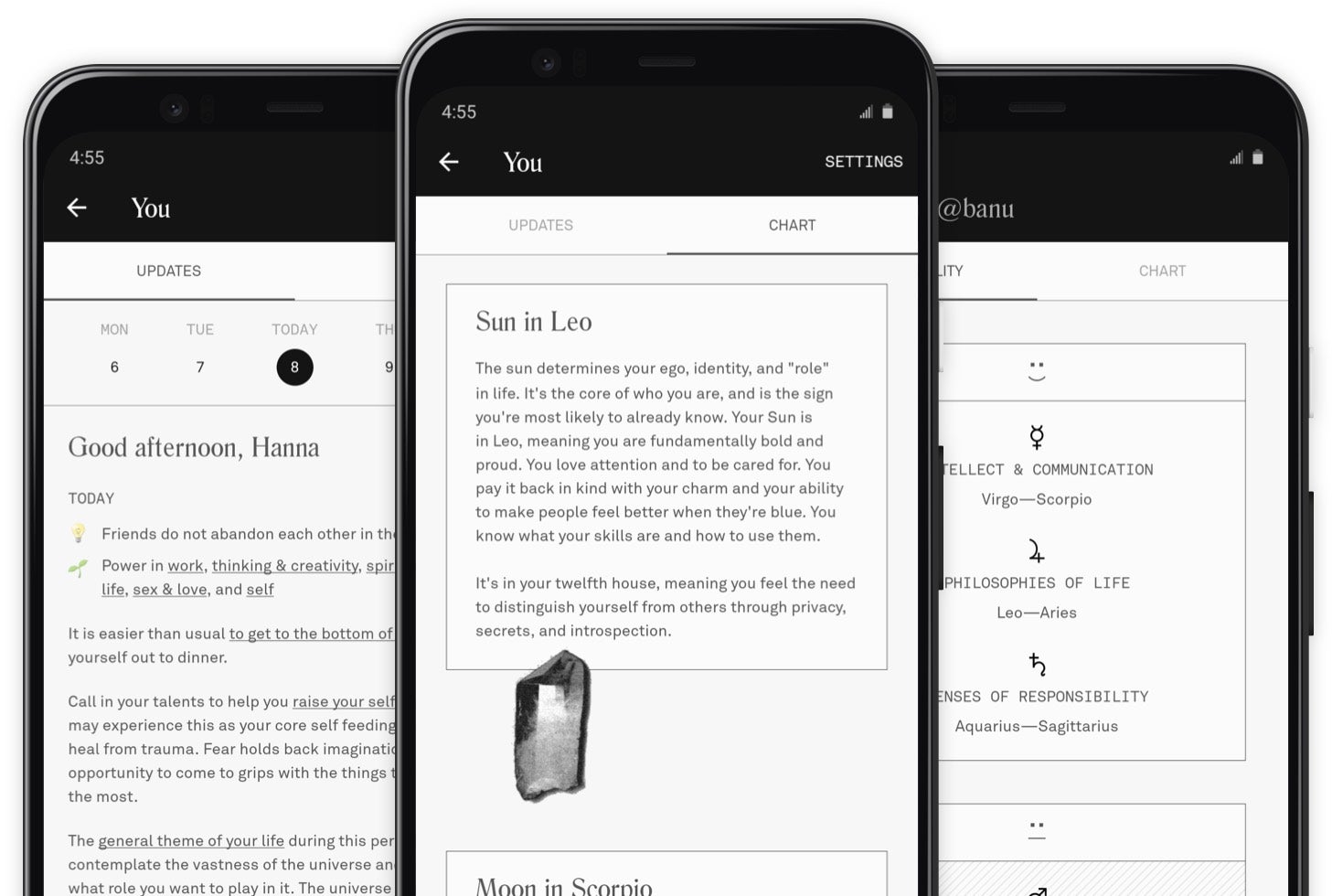 It was a seemingly ordinary Tuesday evening, in the middle of 2021. So it was a rather sad Tuesday. The pandemic, depression linked to classes, and to make matters worse, the stress of the dissertation. In the middle of a depressing conversation, Laura, a friend, regains some energy: “What do you think of the Co-Star astrology app?” Hugo, another friend, replies that he can’t live without it. Noé, the last friend, does not know the app and does not want to know anything: “Astrology is crap, it’s useless.”

As for me, I don’t know what to say. Astrology, I don’t really believe in it. But all the solutions are good to brighten up 2021. I have nothing to lose by giving it a shot. Contrary to my beliefs, I decided to install Co-Star, which I had never heard of.

First steps in the parallel universe of Co-Star

After entering my nickname, my date, my place and my time of birth, my profile is instantly created. Suddenly, I’m catapulted into my horoscope and into Co-Star. It is a social network based on astrology. It allows you to consult your astrological news daily, but not only! You can add your loved ones, check their news and see if you are compatible or not. It is often described as the Facebook of astrology.

I’m not going to lie to you, what attracted me in the first place was the clean design of the application. Just the icon, already. Forget the flashy pink of Instagram or the sky blue of Twitter! Forget generalized kitsch. A few drawings of planets, birds and precious stones soberly adorn the different themes. Monochrome graphics that lend credibility to astrological data.

Once Co-Star is open, the user can navigate between two main sections. On the one hand, we have the “profile”, which corresponds to a personalized daily horoscope in six distinct categories: “self” (the relationship to oneself), “sex & love”, “thinking & creativity”, “routine” ( daily relationship), “spirituality”, “social life”. You will have noticed, everything is in English.

On the “friends” side, I can see whether or not I am compatible with them in these different themes, according to their respective signs (and according to the alignment of the stars, obviously)! Today, for example, I am told that my philosophy of life is rather compatible with that of my friend Laura. On the other hand, I am not at all compatible in terms of communication with Hugo. Terrible sentence.

Bring credibility to a decried science?

The app claims to replace a personal astrologer: “Predictions are now within everyone’s reach”, she claims. It must be admitted that the updates dailies are very detailed. We are happy not to have to call a paid number to consult a psychic on the other side of the world…

Co-Star also prides itself on playing a more scientific card. The application would use “Nasa data associated with the methods of professional astrologers” to generate astrological information. Paradoxically, Co-Star also says it wants to encourage its users to move away from the tumult of new technologies. In other words, the application wants to allow irrationality “to invade our techno-rationalist lifestyles”.

However, the application has a big flaw: as mentioned above, you have to speak English to understand. To make matters worse, some terms are convoluted. Only the English-speaking elite will attain the science of the stars.

On average, in recent months, I must have spent five to ten minutes a day on the app. It’s not a lot. It’s not unusual either. Did I go to the other side? Do I now believe in astrology? Quite honestly, no. I can’t help remembering the famous “Barnum effect“. It is a cognitive bias with which we are all confronted: we recognize ourselves in generalist and universal messages, an area in which astrology excels.

Co-Star is no exception to the rule. But, deep down, I understand the interest that many find in it. I understand Laura’s gaze, which darkens when she learns that Mars is retrograde. I understand that she is apprehensive about receiving her daily mantra (systematically sent by the application) and hopes that it does not bring a bad omen for the day to come.

Because even if I still don’t believe in astrology, against all odds, Co-Star makes me feel good. I love receiving this personalized daily message that attempts to square my mood in one sentence. This sentence will not influence my behavior. It will not upset the course of my day. But then what is it exactly?

As Laura so aptly puts it, Co-Star is a “inspiring application to pay attention to in times when you need it to take one direction or another”. Basically, if I’m in a bad mood, I consult my application to comfort myself and convince myself that the problem is not at home but in the stars. I take what suits me. We delocalize the problems. It’s very useful.

Far from the hubbub of Twitter, Facebook, Instagram and other like factories, Co-Star is indeed a little haven of peace. A getaway out of the world that allows you to temporarily withdraw from reality to comfort yourself in the stars.

To write to us: hellokonbinitechno@konbini.com