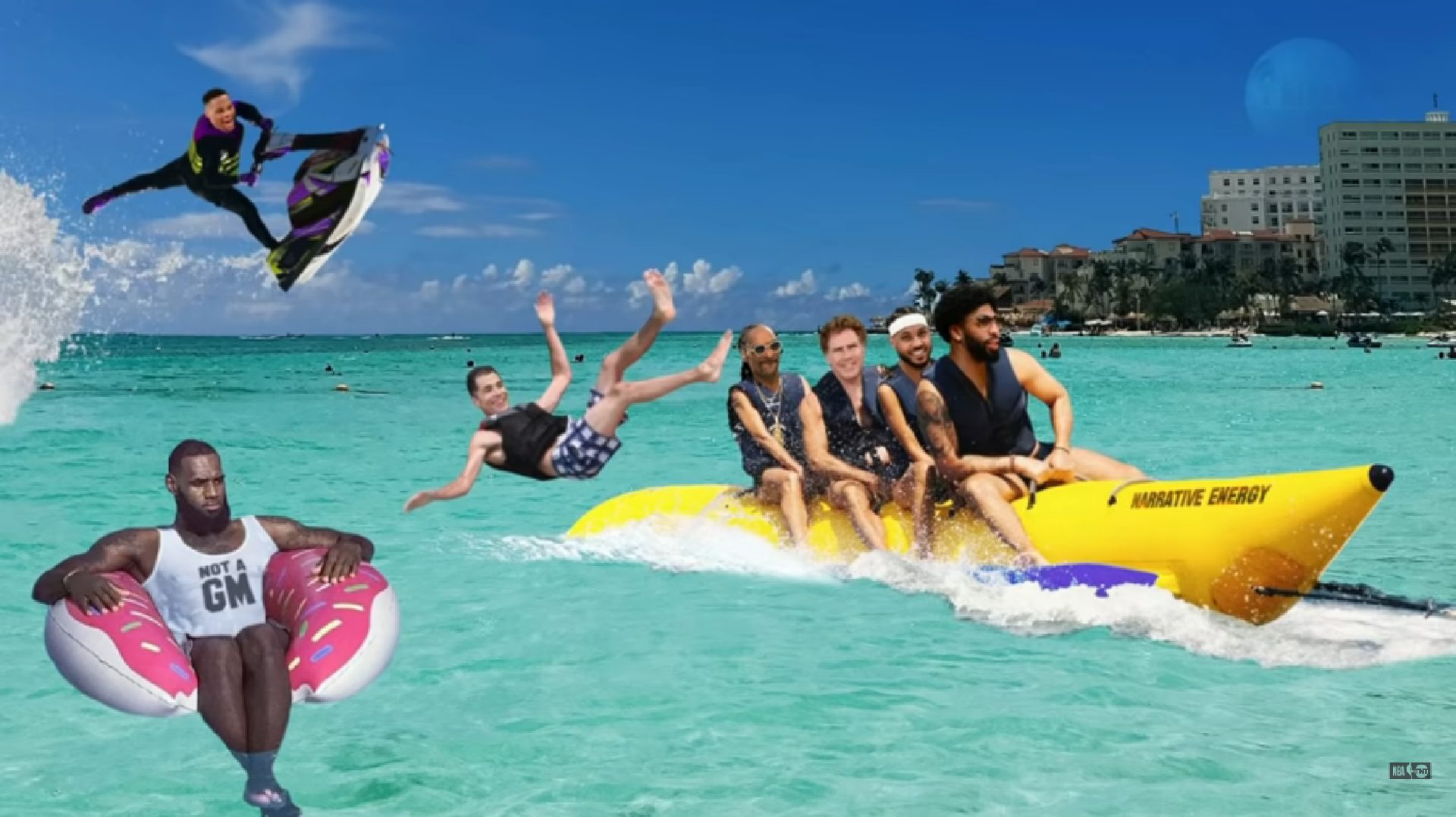 When a team ends its season (in regular or in Playoffs), we often have this reflex to wish it a good vacation in Cancún. But why Cancun? Where does this expression come from, which is always present in specialized articles or even on TV sets? A little backtracking to find out.

Cancún, Mexican city known for its fine sandy beaches, its paradisiacal aspect and, of course, its nightlife. If we stopped just at this description, it is not surprising to see NBA players wanting to spend their holidays in the sun. However, the famous seaside resort is not the only city to enjoy such assets. If you’ve been browsing the web this weekend, you’ll no doubt have seen fans wishing the Bucks and Suns a happy holiday in Cancun. But why not Hawaii? Why not Miami, Ibiza, Tahiti, the Maldives? That’s not what misses the magnificent places. To know the origin of this sentence, you have to take the DeLorean and join Doc and Marty for a little trip in the past.

So we find ourselves on the side of Los Angeles, the City of Angels, almost 24 years back. On May 23, 1998, France still has no star on its jersey, Michael Jordan is in the middle of the Last Dance (at least we believe) and the Lakers are still having so much trouble aiming for the heights. Despite the arrival of Shaquille O’Neal in the summer of ’96, the LA franchise did not make it past the second round in the 1997 Playoffs, beaten by a Jazz team that only lowered their eyes to MJ and his Bulls. A year later, the Lakers seem to believe more in their chances. They released an even stronger season and they just seriously beat the Sonics in the second round. Direction the Conference Final where Karl Malone, John Stockton and the Jazz await them. Can they afford the Mormons and go play for the title against the invincible Bulls? We believe in it on the side of LA and the flock of Del Harris have weapons to doubt Utah. There is the Shaq of course, but also Eddie Jones, Nick Van Exel and the young Kobe Bryant (all four selected for the 1998 All-Star Game), without forgetting Rick Fox, Robert Horry and Derek Fisher. Despite this fine company put in place by Jerry West, we will quickly become disillusioned on the side of the Inglewood Forum. The Jazz give a good big spanking in Game 1, before snatching the second game from experience. The Lakers hope that the narrow Game 2 gap combined with a return home will allow them to come back up to par, but Utah pulls out the muscles to go and collect a third win, this time at the Forum. The Angelinos are slaughtered. Shaq says in the press that the team should be ashamed and show some pride. With a deficit of 0-3, the question is no longer whether a qualification is possible but it is at least a question of saving honor and avoiding a sweep which would be embarrassing.

We thus arrive at this famous May 23, 1998 and the training of the day of the Lakers. The story is told to us by Jeff Pearlman in his book We are the day after Game 3 and the Lakers coach has planned a little morning training on the eve of the (possible) last game of the series. Tradition obliges, the players end the session by meeting for a rallying cry. The regulars of the clubs know, we join our hands in the middle and then 1,2,3 and hop we shout something. It is often the name of the team but it can also be a word defined in advance which is supposed to awaken the warrior feeling in everyone. In short, the LA players are therefore getting closer to each other, but a little joker will want to be humorous. As the rallying cry begins, one of the players shouts “1,2,3, Cancún”! This is Nick van Exel. Flashy and talented player of the 90s, renowned in particular for his handle, his supersonic speed and his ability to catch fire quickly, the one who is known as Nick The Quick is also endowed with a sulphurous character and he sometimes opens it before to turn the tongue in the mouth. Obviously, the sentence is said in a joking tone and the aim is undoubtedly to make people laugh, but the joke does not pass on to the rest of the group. It’s 0-3, the team just palmed home clean and then it’s not like the All-Star point guard is in top form. In the first three games of the series, he averaged 8 points and not even 21% in shooting off the bench. Not content to miss out on his Conf’ Final, Van Exel sends a terrible message to his comrades: that of having already given up the fight. The player of course denies having given up but the damage is done.

The next day, the Jazz finished the job 96-92 and took out the broom on the ambitions of the Lakers. With 11 points and 5 assists off the bench, Nick Van Exel ends on a slightly less disgusting note than his series but his fate is already sealed. Shaq did not miss the day before to see Jerry West, the GM of the Lakers, to tell him about the incident of training. The logo man assured his star that the guard would be packing his bags at the end of the season. The leader is quick to keep his word and, a month later, Nick The Quick was sent to the Nuggets in a deal that included Tony Battie and a Draft pick who would become Tyronn Lue. The player’s reputation has taken a hit, but he is convinced that he is being given the role of Turk’s head above all following the bad series against Jazz.

“If they don’t win the championship this year, I wonder who they’re going to blame. »

The rest, we know it, the Lakers will seek the three-peat between 2000 and 2002 while Nick Van Exel will make his numbers in a Nuggets team at the bottom of the hole before chaining trades until his retirement in 2006 at the Spurs. If his end of career will not mark the spirits, his trait of humor will have crossed the ages. Shaq, now a consultant, regularly jokes with his acolytes on TNT (see below). It took him a few years but 1,2,3 Cancún now makes him laugh.

Almost 24 years ago to the day, Nick Van Exel said four words that would write the legend of the eliminated teams for decades to come. Bis repeats this year and we will not fail to wish a good holiday in Cancún to the next teams that will take the door: Celtics, Heat, Mavs and Warriors have been warned!

Where does the NBA punchline on Cancún come from? A look back at the origins of a destination that has become a benchmark for eliminated teams