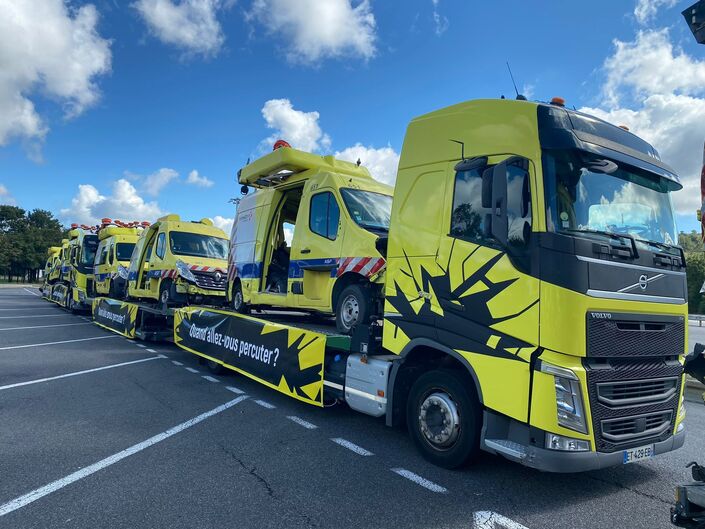 The personnel working on the French road and motorway networks, the “patrolmen” as they are often also called, exercise a risky profession. A service mission that has become even more dangerous in recent months than in the past. This is at least the feeling of this profession, a feeling unfortunately justified by alarming figures.

“Four officers have been killed in intervention since the beginning of the year on the entire French road and motorway network”indignant Vinci Autoroutes, adding that on average “more than 1 intervention vehicle is still hit every week on its network” and 2 on average over the entire French motorway network under concession. In the majority of cases (3 out of 5 cases), these accidents are caused by sleeping or inattentive drivers.

Fed up, basta! This is essentially what the roadside assistance professionals are crying out for, these “guardian angels” ready to come to the aid of motorists 24/24 and 7/7. Like the employees of the Vinci Autoroutes group.

On this summer holiday eve, the dealer wanted to make an impression. It formalizes the launch of a vast operation, a shock and itinerant mobilization which will criss-cross its entire French network during the month of July.

“An exceptional convoy, made up of 6 tank carriers, each carrying 3 damaged vans, will successively criss-cross 17 service areas of the French VINCI Autoroutes network with a simple and crucial question as its banner: “When are you going to hit?” »unveiled the operator this morning.

This awareness campaign with a deliberately incisive message begins on July 1 at the Vienne toll gate (38), at the entrance to the A7 motorway. It is an opportunity for Vinci Autoroutes agents to express their exasperation at the collisions of which they are victims. On the other hand, its purpose is to encourage drivers and the general public to “Finally become aware of the dangerousness of certain behaviors” driving: in particular the use of smartphones, non-respect of distances, drowsiness or total ignorance of what is called the “safety corridor”*.

The demonstration of force that the Vinci Autoroutes group will carry out throughout France over the next few weeks hopes to finally change the mentalities of motorists, through shocking images but above all through a lot of exchanges and education. The slogan of the operation “When are you going to hit? » will also be relayed through a poster campaign, both in service areas and on social networks.

*Safety corridor: This rule has been part of the Highway Code since 2018. It consists of leaving a free lane or shifting as far to the left as possible from one’s traffic lane when approaching an area in which traffic is operating. rescue and assistance personnel, and in particular motorway agents.

“When are you going to hit? », the shock campaign of Vinci Autoroutes