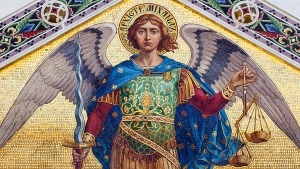 What do we know of angels like those who sing in our countryside on Christmas Eve? Their geography is not ours, they are everywhere “surrounded by divine power” and their main activity is to sing the praise of God… as around the nativity scene.

Angels occupy an important place in the Christmas celebrations, and their presence has become habitual to us. From Genesis to the Annunciation to the Nativity, winged and friendly figures populate the Christian imagination. They are also present in many masterpieces of art history, from Giotto to Arcabas. But what do we really know about angels? Everyone will agree that they are spirit creatures that are not subject to death. But still ? Can we see them? How many are they ? Can they act in our material world? How can they communicate with us? As soon as we try to better understand the angelic nature, it seems to withdraw into the cloud. Saint Augustine, Saint Bonaventure, Saint Thomas Aquinas and many others sought to shed light on this mystery.

In a recent book facetiously titled Do angels know how to count? (Ars Dogmatica), Father Jean-Robert Armogathe travels through the Christian reflection of past centuries, and thus offers us a sketch of what we can know about angels. Here we are introduced into an angelic geography whose laws and rules differ profoundly from those of our material world. And the study of this universe has also incidentally enabled scholars of the modern era to make important advances, for example to highlight the reality of the vacuum.

The main activity of the angels is to sing the praise of God, which they do especially around the nativity scene at the birth of Jesus, going so far as to wake up the surrounding shepherds. Certain angels have a particular role. Thus the angel Gabriel who announces to Mary the coming of the Saviour, or the frightening angels of the Apocalypse. The Archangel Michael, who fights Satan, and the guardian angels attached to our steps are other figures.

The space in which the angels live is not ours: they live in the “empyrean sky”, which literally means “surrounded by the divine power which enlightens and illuminates them”. This is also the place of the souls of the blessed who await the resurrection. They are not subject to death like humans, and live in an “avoidity”, from the Latin aevum, a duration that has a beginning but no end. God is eternal, he has neither beginning nor end. Angels also have a language, through which they communicate with each other, and can even speak to us. But since they are right from the start, they cannot lie, argue, or talk. And no mathematical problem can resist them either, which will make more than one schoolboy dream.

If the world of angels is not ours, it is not foreign to us either, and crosses our paths every day to bring us back to divine contemplation. And if, as the poet Rilke said, “Every angel is terrible”, the angel is also the consoler and defender of the soul.

Discover in pictures the hierarchy of angels:

What do we know of angels in our campaigns?