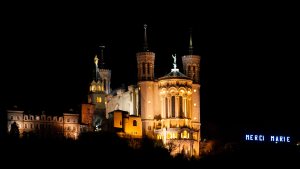 In this year of the Centenary of the proclamation of Mary patroness of France and of Joan of Arc, secondary patroness, several Marian and missionary movements are mobilizing so that this December 8 is a huge “Thank you Mary” throughout the country. They relay the initiative of the association Merci Marie, which, from Lyon, since 2002, invites to mark especially the feast of the Immaculate Conception by vigils of prayers thanking the Blessed Virgin for her protection and all the graces received.

The city of Lyon has venerated the Virgin Mary since the Middle Ages and placed itself under her protection in 1643. On December 8, 1852, fireworks were planned for the installation of a statue of the Virgin on the chapel of Fourvière, but a torrential rain falls on the city. As night falls, the sky clears up and the rain stops. It is then that lights appear at the windows which multiply and illuminate the city. The one-night event is repeated for a few decades: on the evening of December 8, the people of Lyon celebrate the “Festival of Lights” for the feast of the Immaculate Conception. But as time passes, the fire goes out.

The revival and development of a beautiful tradition

In 2002, a small group of volunteer Catholics based in Lyon decided to rekindle the flame and put Mary back at the center of this popular celebration, making December 8 a moment of true mission and evangelization. Twenty years later, the tradition has been strongly relaunched in Lyon with magnificent fruits and there are already hundreds of parishes, schools and retirement homes which are now mobilizing everywhere in France to reclaim this beautiful Marian feast and have a missionary party. In all these places, multitudes of candle lights are placed at the foot of the statues of the Virgin and as many prayer intentions rise towards her. But why not do more? Why not everywhere?

It is possible, because nothing is simpler than organizing such a vigil near your home. Here is the procedure to follow: first of all, ask the authorization of the person in charge and fix the schedule of the vigil; to inform this form to be listed on the interactive mapand receive the free kit Thank you Mary ; then order tea lights; and finally, when the day comes, be there to illuminate the place of prayer as much as possible and welcome visitors with a smile. It is very simple and accessible to everyone, and the fruits can be magnificent.

Christiane, from the Sainte-Geneviève d’Asnières institution (approximately 2,000 pupils), remembers the evening organized: “The chapel of our school has never been so full… there were children everywhere! Never seen ! And this thanks in particular to the flyers that we sent to families last week and what joy for them to receive this simple little bookmark with this so beautiful image at the end of the mass; you had to see the faces…”

This annual appointment with the Virgin Mary gives the possibility to all those who are far from the Church to make a small gesture to say “Thank you Mary”.

In Aubiac, a small village of 1,000 inhabitants in Lot-et-Garonne, Maryline and Father Olivier confide: “This is the third year that we have organized within the parish of Sainte Bernadette en Bruilhois, which brings together 10 villages, this evening of prayer and friendliness. We invite the inhabitants of Aubiac to decorate their house or simply to turn on a small light and for the little ones to bring a toy for sick or disadvantaged children. It is always with emotion and great joy that we see the lights go on and a large number of people and children arrive in procession with their little candles at mass. »

This annual appointment with the Virgin Mary gives the possibility to all those who are far from the Church, to those whom the angels lead and to those whom the Holy Spirit inspires, to come, on this great feast of the Immaculate Design, make a small gesture to say “Thank you Mary”.

This year, in addition, for those who wish, it is also proposed to join the sanctuary of Île-Bouchard on December 8 for a great day of prayer which will end with the deposit of all the commitments of consecratedhastion to the United Hearts of Jesus and Mary received since the beginning of this anniversary year. Masses, rosaries, conference, vigil Thanks Mary, the complete program is available on the website 100 stars for Mary.

“Bureaucrats are the guardian angels of happiness”
For to which of the angels did God ever say: You are my Son, I have begotten you this day? And agai...
Messe du 1er mai 2022 à Épinay-sur-Seine
Tweet
Share
Share
Pin