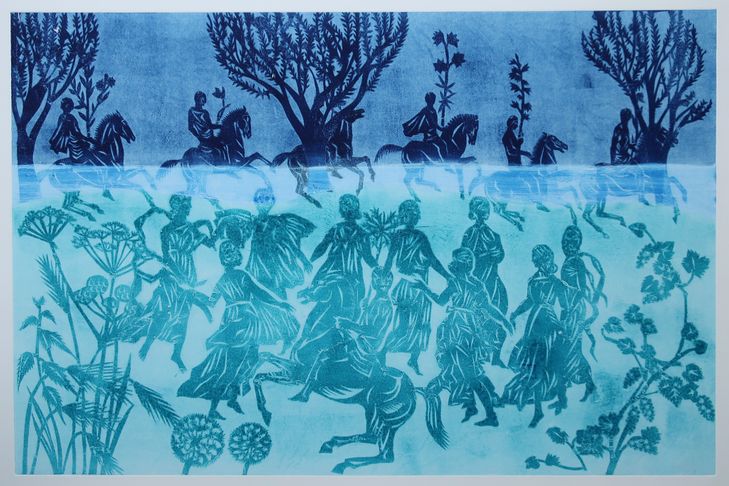 Under the Eye of the Dragon – Angels, Saints and Demons

It is rare to find oneself thus, from the first pages of a book, at the heart of the invisible, a reality often forgotten, concealed, or denied today. Under the eye of the dragon is woven from two meditations: the fight of the artist, Paul Kichilov, from darkness to light, and the itinerary of the author, Pauline de Préval, images of her childhood guided by an angel, her celestial double, to the assiduous reading of the Scriptures, of mystics and theologians – Gregory of Nyssa, Saint Ephrem the Syrian, Hildegard of Bingen –, and of poets – Antonin Artaud, Ossip Mandelstam, Philippe Jaccottet.

→ RECIT. The lives of angels according to Dante Alighieri

This dialogue, which continues for two years, begins in the daily hell of traffic jams in Paris: pollution, speed, nervousness. Pauline de Préval has just bought from Paul Kichilov the engraving of a guardian angel through which he was able to capture the soothing radiance of these celestial beings, far from the world where she deplores the race for efficiency and profit. She then suggests to the artist to go back to painting angels.

In the works born of this project (1), little by little, from the dominant blue, less tormented figures emerge. Paul Kichilov’s paintings are crossed by the tragedies of the century, the secret anxieties of personal battles, Russian tales and philosophers, familiarity with religious painting, in particular icons. “When we live so clearly in the time of the Apocalypse, what can an artist do? »he asks Pauline de Préval.

And then, the colors become less dark, the celestial blue and the deep blue dominate, the almost golden yellow – the gold of the icons – arises, a cathedral appears, Christ, Mary, the angels take shape, seem to glide, like apparitions, in a profusion of flowers and birds.

Pauline de Préval’s path in front of Kichilov’s engravings and through literature is a meditation on the nature of angels, their unrepresentability and the projections of which they are the object. It is sometimes the cinema that has imagined what their life can be like. In The Wings of Desire, Wim Wenders made an angel speak and live who, in Berlin at the end of the last century, renounced immortality after falling in love with a trapeze artist.

→ VIDEO. Wim Wenders: “This film with the pope made me a braver person”

Angels are spirits, superior to man in purity, inferior in having no body; they are messengers who help man but cannot create anything, said the Orthodox theologian Paul Evdokimov. They would not know the emotions and would even envy, according to Saint Francis de Sales, the suffering of men.

Far from being sentimental, Paul Kichilov’s angels are, as on icons, signs that refer to the mystery of God. They fight against shadow and darkness, the forces of evil represented by the dragon defeated by the Archangel Michael, still present in the world. Isn’t Satan a rebellious angel? “O thou most learned and most beautiful of angels! »wrote Baudelaire in TheLitanies of Satan. And Pauline de Préval recalls the words of the poet Rilke: “Every angel is terrifying”.

→ MAINTENANCE. Carlo Ossola: “It is by light that we distinguish things”

Having immediately delimited her territory, that of faith, the writer makes it clear that the existence of God cannot be denied or proven by science. Regarding transhumanists, she remarks that these “New Gnostics” consider the human body “like a draft to be corrected by IT and biotechnologies”. Wouldn’t their adherence to this neo-scientism be a form of credulity?

In fact, angels are very often relegated today – including by believers – to the side of the symbolic, the imaginary, the esoteric, as if it were ridiculous to admit their presence. In the secrecy of hearts, however, this denial of the supernatural often disappears.

“Under the eye of the dragon”, dialogue with the angels