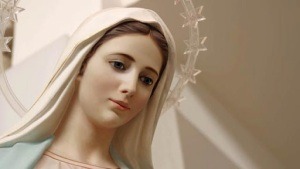 “Eternity enters our existence the day we set our course for God,” writes Teilhard de Chardin in Genesis of a thought. The art of living as a Christian, that is to say the quest for holiness, does not consist in becoming a ghostly spirit, nor in disembodiing, nor in leaving the earth to better rise towards Heaven. Holiness consists in letting the Holy Spirit make his home in us, by begging each day for humility of heart, by letting Christ influence us by his Word, by living the battle of daily prayer, the incessant conversion of the little ones not, the courage it takes to avoid downfalls and not argue with temptation. One dreams of one’s life in a big way, one realizes over time that it is lived in a small way, like bread placed on the familiar table, and that one must choose the love of the Lord in every ordinary thing. The grandeur of our existence will never have the excess of our dreams, but the depth of our lived love. The more we seek the inner life, the more we become ourselves. The more we receive the Spirit of God, the more we inhabit our body like a Temple erected on the earth of men.

I have sometimes seen in certain religious, still novices, this subtle temptation to spiritualize all things in an ethereal existence which no longer seems to cling to anything tangible and despises the gravity of the world. “Throw yourself down,” said the devil to Christ in the temptations in the desert. The angels will carry you” (Mt 4, 6)… The worst demon is the pious demon. He reserves his attacks on those who seek Heaven, not those who wallow in materialism and fleeting pleasures. He therefore attacks the best, those who have the desire for God and who sincerely seek the Kingdom. The others already belong to him and he is careful not to worry them in any way. It secures them and covers them with all-risk protection and insurance. He caresses them gently like his little stuffed animals and cradles them like his little infants.

He is very dangerous, however, the pious demon… We believe him to be holy but he is only thin. He willingly decked himself out in a homespun robe and affected a “distinguished urbanity” as Augustin wrote of the brilliant young rhetorician he was before his conversion. That devil wears Prada. He never drank too much, nor whistled in admiration at the passage of a pretty girl. He never had another helping of aligot or sausage and lentils, nor a plum brandy or a Bas-Armagnac. He would be more of a Vegan and new type of cuisine to peck at the constipated air two or three grains of organic-fair trade quinoa hidden in a plate that is too big but well presented. Next to him, the demons of the flesh are good little devils. He is filled with his superb. He despises the body, accusing it of being the source of all lust. He does not sleep, eat or drink. He calls Christ “a glutton and a drunkard, a friend of publicans and sinners” (Luke 7, 34) and goes like a prince, accusing and harsh. Pure and hard…

What remedy to fight it? It is enough to return to the land where the Word has pitched his tent… “Give him a good chicken” as Saint Teresa of Avila said when she heard of a nun inclined to apparitions and ecstasies… “The Good Lord is at the bottom of the pots. She had, however, experienced mystical phenomena, but she was an extremely carnal woman, and that saved her. The flesh sometimes loses us. Basically, it always saves us. She reminds us that we are not angels. God catches up with us by our mantle of flesh when we are at the edge of the abyss. “It is through his lower abdomen that man finds it difficult to take himself for a god” writes Nietzsche. What good sense, this Nietzsche… The great Thérèse had learned little by little, in falls and tears, in the contemplation of the holy humanity of Christ, to direct her immense seduction towards the Father, her disordered thirst to be loved and admired. She had learned to love this heavy flesh that God had wanted to put on…

I have never seen it in the elders, the pious demon, nor in the old monks, nor in the mothers of families, nor in the faithful spouses… They have lived through the ordeal, the bleeding of the soul, the struggle against the passions, the patience of love lived on a daily basis. They have come back from their illusions about the Church and love her with a greater love, because more true, as a solid housewife can love her house who is no longer afraid of dust and ceases to be exasperated when she sees a stain on his starched tablecloth. Let’s finally stop being outraged. Indignants are usually unbearable and always exhausting. We risk tinnitus. They make you thirsty by shouting too much and their frenetic agitation undeniably contributes to global warming. Their howls contribute greatly to the vanity of the world. Indignation does not take the place of conversion. Let’s start by converting ourselves, and everything will be better. Structures are reformed only by the conversion of men.

Honor to the great elders! They got this wisdom. They broke the idolatrous shell of their illusions of holiness, impeccability and angelic purity. “A parish is dirty, Christianity is even dirtier,” writes Bernanos. We can fight against dirt, it would be futile to want to eradicate it. It is inevitable that scandals will happen, says the Lord, and we will always have the poor with us. Christ did not come to annihilate sinners, nor to prevent scandals, nor to eradicate poverty, but to direct our hearts towards the Father. He alone will make all things new. In the meantime we walk like travellers, from consolation to desolation, from fall to recovery. And it is simple wisdom to consent to imperfection, while fighting against the bondage of sin. But a calm and determined battle, without excitement. The best legionnaires are calm in battle. They hurry slowly. Slow feast. Man harnesses his horse, but victory belongs to God alone, says the book of Proverbs (Pr 21). So, as they say among the riders of the Black Frame: “Forward, calm and upright. » And « to God vat! as they say among sailors.

Five books by Annie Ernaux that say the status of women like no one else
Scam: this fake parcel delivery SMS can rob you, be careful!
Camille Cerf to the angels: this big step that she crosses with her darling
Tweet
Share
Share
Pin