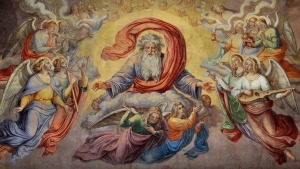 Far from arising from superstition, theological works on angels and angelism manifest as much the intellectual genius of man as the richness of his spiritual life.

For Father Griveaux, parish priest of Saint-Germain de Charonne, “ we would have every interest in rediscovering the angel and the place of the angel in the world. First for the thanksgiving of the gratuity of God’s work “. The idea of ​​spirits devoid of bodies, which are essentially angels, proceeds in itself from a deduction which has nothing specifically Christian about it, and it had been abundantly studied by the Greek philosophers, in particular Plato, who had noted that “man is placed above creation by virtue of his intellective power. Yesterday like today, we can simply deplore that “man can be blind and only see what he can measure”.

“The work of God goes beyond utilitarianism”

But if it is possible to access a certain knowledge of the life of the spirits by simple reason, this knowledge takes on its full meaning only in the light of divine revelation. Indeed, like all creation, angels are “a work of God’s gratuity, which marvelously expresses the gratuity of His love; angels are not necessary for Salvation, only Jesus, who is God, is — and that says something about the work of God that goes beyond utilitarianism. »

Above all, the contemplation of angels therefore brings us back to our status as creatures. Despite their great perfection, angels remain creatures — and it was the rejection of this dependence on God that caused Satan’s downfall. Like man, the angel is created for good. But he too is endowed with a free will that allows him to accept it or refuse it. Which makes Father Griveaux say that “grace is more original than original sin, man at the start is created without sin”.

Read also:
When were angels created by God?

Created without corporeality, angels enjoy an intelligence and a will that are not obscured by matter—they are “im-mediate.” From this immediacy of the spirit flows the definitive character of their adhesion or not to the divine order – the angel is therefore immediately holy or damned. The difference is therefore that for men, the will is not definitively fixed and remains open to the mercy of God: “The fathers of the desert thus often brought the 99 sheep together… multitudes of angels (each angel constituting a species in its own right) remained righteous, while the lost sheep (and which Jesus goes to seek at the risk of his life) is interpreted as humanity, unique, and carried on the shoulders”.

A reminder of priorities in the spiritual life

Furthermore, theologians have distinguished nine categories of angels, whose participation in the divine kingdom is ordered according to a hierarchy of functions. The angels thus remind us of the priorities in the spiritual life, and therefore the hierarchy of activities in the temporal life. For example, “it is interesting to note that it is Lucifer, a Cherubim, an angel whose nature leads him to to know God, who has fallen — and not a “Seraphim” whose proper thing is to love with burning love (Saraph: burning, in Hebrew); it shows that one cannot deceive when one loves God, whereas knowing him does not preserve from pride”. Even among the angels, science without love… Saint Michael is known for slaying the demon – despite a much less important place in the celestial hierarchy – and his name, which means “who is like God?” is a reminder of the humility that Satan failed.

The life of the angels thus reminds us of the essentials of the spiritual life: “The first thing that the angel Michael does is to say the Good, then consequently to fight evil, and in particular at the moment of judgment. where good and evil are to be discerned. We tend to do fight spiritual something central, when what is important is the life spiritual — the fight only intervenes when an evil, or, more often, an apparent good, comes to divert us from the True Good. »

On the occasion of Saint-Michel, Father Griveaux invites you to rediscover the grace of angels through prayer.

In pictures: the hierarchy of angels

The message of the angels to humanity