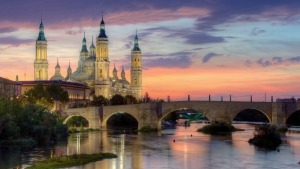 On October 12, Spain celebrates Our Lady of Pilar, patroness of Hispanicity, closely linked in the hearts of Spaniards to the Apostle James. Without the miraculous intervention of the Virgin Mary on a mysterious pillar still visible, “Santiago” indeed, would perhaps not have remained and… returned to Spain.

It is perhaps the oldest of the Marian traditions and the oldest sanctuary of Our Lady in the world. The story of Our Lady of the Pillar, Nuestra Senora del Pilar, in Zaragoza, has resisted for almost two thousand years, it is said, all attacks, including those of strong minds who want to reduce it to a legend without credible foundations. There must be a reason for that! Around the year 36, a first persecution struck the young Church. Saint Stephen, the first martyr, is its emblematic victim, but he only inaugurates the long series of witnesses who died for Christ.

Partly orchestrated by a young Pharisee, Saul, the future Saint Paul, this hunt for Christians encouraged the apostles to disperse and leave Jerusalem for a time at least. Thus do they take shelter and respond to the Lord’s request to go out into the whole world and to make disciples of all peoples. If some, at first, hardly stray far, others, pushed by the Spirit, leave the Near East for Europe or Central Asia. Among these adventurers of the faith, if one believes the Tradition, figures the apostle Jacques, the eldest brother of Jean, who would have gained Spain.

The discouragement of Jacques

Some historians doubt it, pointing out, rightly, that we know the date and the circumstances of the death of James, imprisoned and beheaded by order of Herod in the holy city in 45, the first of the Twelve to perish for his fidelity to the Master . Does this martyrdom of James in Jerusalem prohibit him insofar as he had, nine years earlier, attempted to evangelize Spain? Not at all! Even with the means of the time, and the risks incurred, the people of antiquity were great travelers and the apostle may well have crossed the Mediterranean.

That said, and still according to Tradition, the expedition was not very successful. The preaching of the “son of thunder”, as Jesus called the two children of Marie Salomé, came up against the contempt and ill will of the Romanized Iberians and, after long months of effort, Jacques, established in Zaragoza, did not convert only seven people… The least we can say is that he is not happy with the result and, since he has never had good character or shown patience, he is ready to drop everything and regain the Judea, where the persecution subsided.

Within this light, Mary appears, resplendent and surrounded by angels who proclaim her praises.

We are on January 2, 39 or 40, opinions differ, and the apostle has decided to gather his meager herd of converts to inform them of his approaching departure. It is a dark and cold winter night, and the news of the departure of their pastor, assailed to the poor Christians of the place, does not illuminate it… Now, suddenly, a marvelous light surrounds them, as well as wonderful songs. Within this light, Mary appears, resplendent and surrounded by angels who proclaim her praises.

The Virgin of the Pillar

It will not fail to be objected that on this date, the Mother of Jesus is still very much alive, installed in John’s domicile as her Son requested on the cross, whether in Jerusalem or in Ephesus. Under these conditions, how would she appear to the brother of the beloved disciple? Quite simply, if one dares to say…, by bilocation, a mystical phenomenon well attested by the Church which allows some great saints, and a fortiori the greatest of all, to find themselves present in two places in same time if an urgent need so requires.

Miraculously warned of Jacques’ discouragement, Mary came, motherly, to comfort him and ask him not to abandon on a whim and bewilderment those whom he had led to Christ. She stands on a column of precious jasper, one meter sixty-seven high. Addressing the apostle, Our Lady said to him:

This, my son, is the place marked with a sign and destined to honor me. Here, thanks to you and in memory of me, my church must be built. Watch over this column on which I find myself because, be sure of it, it is your Master, my Son, who sent it from Heaven carried by the angels. Here, through my prayers and my intercession, the strength of the Most High will accomplish admirable marvels and prodigies for those who invoke me in their necessities.

Then She disappears, leaving as proof of her coming the famous column, the Pillar, on which She stood.

Such is the story of the foundation of the Spanish sanctuary of Pilar, as reported by the holy Pope Gregory the Great, at the end of the sixth century, in his Morales on Job ; now, Gregory knows the Spanish Church very well, because of his links with the bishop of Seville, his friend Saint Leander, whom he met when he was an apocrisial, today we would say nuncio, in Constantinople. What is indisputable is the age of the Marian sanctuary of Zaragoza, built near the banks of the Ebro around the sacred pillar in the 4th century, certainly on a much older clandestine place of worship. Certainly, James, recalled to Jerusalem, will end up leaving Spain but he will return there, centuries later, when his relics will be pushed by the wind towards the coast of Galicia and the place which will become Compostela. Thus Santiago and the Pilar are closely linked in the hearts of the Spaniards.

The basilica survived everything: the Arian heresy which, denying the divinity of Christ, also denied the divine maternity of the Virgin, the Arab invasion and the Muslim occupation. It was rebuilt in 1118 in Mozarabic style by the King of Aragon, Alphonse I the Battler. The embellishment work will last until the 16th century. Covered in bronze and silver to protect it, the column also holds firm, and an oculus is installed to allow pilgrims to touch it. This column represents the union of Heaven and Earth, and Mary, the channel of graces which, by obligation, pass through Her; it also represents the solidity of Spanish Christianity since Mary said that she would stand firm “until the end of the world” and that of the faith of Spain. It is surmounted by a black wooden statue of Our Lady of the Pillar, made in 1438, the old image having disappeared during the Muslim occupation, by the sculptor Juan de Huerta, to thank for the healing of Blanche of Navarre .

The return of the leg of Miguel Juan

However, an incredible event will lead, a century later, to the complete reconstruction of the basilica and its replacement by an immense Baroque sanctuary, one of the largest, splendid. Admittedly, the story is not trivial. In the mid-1630s, a young peasant, Miguel Juan Pellicer, injured his leg while working in the fields.

Very quickly, the doctors, despite his pleas, decided to amputate him because it was the only way to save his life, perhaps. What is done. The boy survived this terrible operation but nothing helped: he could not bring himself to remain crippled and cried out for a miracle. What he wants ? Nothing less than to recover his severed leg, piously buried, according to custom, in the village cemetery. No matter how much everyone tells him that such a miracle would be, if not impossible because nothing is impossible with God, at least unprecedented, Miguel Juan persists and, dragging himself on his stump, he manages to get to Zaragoza where he collapses at the foot of Notre-Dame du Pilier. He stays there for days, weeks, praying, begging and anointing his wound with holy oil from the lamps of the sanctuary. Without result, as it was, we sneer, predictable.

Finally, at the beginning of 1640, the poor boy had to resign himself to returning to his father’s house. He arrived there on March 29 in a lamentable state, exhausted, ill, delirious with fever, almost dying. Moreover, his parents, sorry to see him like this, are convinced that he will not spend the night. They put him to bed, and watch over him as the dying man he appears to be. But Miguel Juan does not die. At daybreak, her fever subsides, her complaints stop and her mother, in the light of dawn, does not believe her eyes: under the blanket, where, for years, the amputation has left a lamentable void. , the shape of the lost leg stands out clearly. Trembling, she lifts the blanket and is speechless: the missing member has grown back! Even more amazing, it is undoubtedly the same leg once amputated because it bears the scars of the accident and various recognizable marks.

Medical luminaries will parade in front of the impossible miracle, and recognize, like the Church, the reality of the facts. Moreover, when the tomb where the amputated limb was buried is opened, it turns out to be empty! The faith of the young man, to transport the mountains, and the maternal kindness of Our Lady of Pilar obtained this prodigy. Moreover, Miguel Juan remembers having dreamed, that night, that he stood at the foot of the Virgin and once again put holy oil on his stump.

In the process, in 1678, the Spanish Cortes named Our Lady of the Pilar queen and patroness of Spain, as well as of its colonies, which is why the Virgin of the Pillar has two feasts, one on January 2, the date of his bilocation, the other on October 12, Hispanic Day.

It is well worth rebuilding the basilica, more sumptuous than ever! In the process, in 1678, the Spanish Cortes named Our Lady of the Pilar queen and patroness of Spain, as well as of its colonies, which is why the Virgin of the Pillar has two feasts, one on January 2, the date of his bilocation, the other on October 12, Hispanic Day. “General in Chief” of the Spanish army, patroness of the Civil Guard, Our Lady of the Pillar gives her name to countless Pilar and Maria Pilar. If she is passionately loved by the Spaniards, she also arouses the fierce hatred of enemies of the faith. On April 1, 1939, as they retreated from Franco’s troops, the Spanish Republicans decided, in a final gesture of defiance, to crush the Saragossa sanctuary under shellfire.

These are still perfectly visible today, embedded in the walls and roofs. Without any rational explanation, none of the projectiles, after hitting the target, exploded. Our Lady of the Pillar, column of Spanish Catholicism, did she not promise that she would resist until the day of Judgment?

The day when the apostle James, discouraged, received in Zaragoza the visit of the Virgin

[VIDEO] Saïd Amellal, Agen RC coach: "France - Morocco, it's like choosing between my father and my ...
Tribute - Discover the last interview of Raymond Devos conducted in 2005 by a journalist from Dreux
Special Edition #81: Ally McBeal
Tweet
Share
Share
Pin