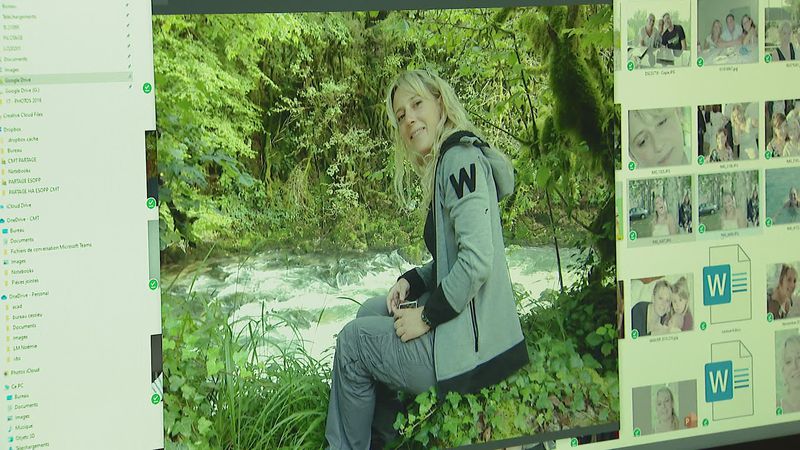 “We approach this Monday with great impatience”. Stéphane Erbs, co-president of the “Promenade des anges” association, lost his wife Rachel in the Nice attack of July 14, 2016. The trial begins this Monday, September 5, just over six years after the tragedy. On the eve of this meeting with justice, the bereaved father recounts his life after the tragedy.

It’s one of his favorite photos. The young blonde woman, smiling, poses alone on the banks of a small river in the Ain. It was a hiking day. One of those moments of happiness immortalized and flown away. In his personal computer, Stéphane Erbs has practically only photos of Rachel, his missing wife, his “soul mate”.

The Lyon family was shattered by this bloody attack which also left many injured, more than 450. The young woman is one of the 86 victims of the murderous team of the truck driven by Mohamed Lahouaiej-Bouhlel. This tragic July 14, 2016, Rachel had booked a family stay in Corsica at the very last minute. The crossing by boat was to take place from Nice.

For six years, Stéphane Erbs has not ceased to relive these moments. Trauma is present on a daily basis.

“It’s like seeing life through a veil. And images are constantly projected onto this veil. playing sports – it keeps coming back. The worst is in the evening, before falling asleep or if you wake up in the night. I sleep very little and as soon as I wake up I have a lot of trouble sleeping. go back to sleep. It goes on a loop: the truck, the noises, the sounds, the images, the atrocity, the bodies…” says Stéphane Erbs.

We grit our teeth and we work, that’s all! I don’t have the luxury of being able to stop. I didn’t have that luxury, and fortunately because resilience came through hard work.

Stéphane Erbs, husband of a victim of the Nice attack

The bereaved family man clung to his job.

“I know people, six years later, who are not able to work. I know a person who was a driver and who told me: I can’t work, you have to drive trucks. I have trucks that Sometimes it makes you cry, sometimes it makes you want to vomit. We grit our teeth and we work, that’s all! I don’t have the luxury of being able to stop. I didn’t have that luxury. there and fortunately because resilience has come through work.”

Despite the bereavement and injuries, a month and a half after the attack, Stéphane has returned to his business, the one he created himself. His two children were present on the day of the attack, so continuing to move forward is obvious to him even if he does not forget and if the anger is still present.

“There are many people who have managed to pass this course and now be in forgiveness. I am sorry, for the moment you will not have my forgiveness. There is always my hatred. I am always in this anger My kids no longer have their mother. I manage to take it upon myself but when I look at my children, I feel sorry for them. After the attack, the first observation I made when I set foot in the house is: I’m going to have to raise them without their mother. They’ll never see her again.”

Six years have passed and with the victims, we are in a black and cold anger. It’s not explosive anger anymore, it’s worse.”

victim of the Nice attack

At the time of the attack, the couple’s children, a little boy and a girl, were 7 and 12 years old. Beyond mourning, the father of the family evokes the injustice that strikes his children confronted with the absence of their mother: “It’s not a gift that life gives them. They didn’t deserve this”.

Stéphane became co-president of the victims’ association “Promenade des anges”. Every July 14 he returns to Nice. The trial of the attack which opens this Monday, September 5, 2022 before the special assize court in Paris, he was impatiently awaiting it. To know the truth, but not only.

“The first thing is to put faces to the names that we have been hearing about for six years. We will only have the opportunity once to address them, to address the court, to explain to them how they destroyed 86 families, how many victims are still suffering because of them”, explains the father of the family. “There were 86 families destroyed” he specifies.

The trial of the Nice attack is extraordinary. It brings together 850 civil parties and 133 lawyers. In the end, 8 people were judged but a great absentee remained: the author of the massacre shot dead on the evening of the tragedy by the police.

“We judge people who had secondary roles, who may have as a defense strategy, their lack of awareness of what happened that day and of the terrorist’s project. We will have to seek their responsibility , their level of knowledge of the terrorist project of July 14”, specifies Me Fabien Rajon, the lawyer of the association “Promenade des anges”.

From this trial, Stéphane Erbs does not hide it, he also expects to be “disappointed”. “The first thing we expect is to be disappointed because the sentences that the defendants risk are not necessarily very high. We are prepared for that. There are people who face up to 6 years of prison. That means that on the evening of the trial, they can come out free” he explains.

Stéphane is an engineer by training. Resilience came through work. Resilience is also his domain and a constant reality. “In mechanics, it is the capacity of a body to absorb a shock and to resist it. The transposition is simple: between the metal bar which undergoes a shock and a man who is hit by a truck or suffers bereavement, it’s the same. It’s the ability of a person to recover from a disorder, stress, bereavement, physical pain. Resilience is not being strong, it’s is to face up to its responsibilities”.

Terrorist attack in Nice: Stéphane Erbs, bereaved husband, attends the trial to “put faces to the names” of the defendants