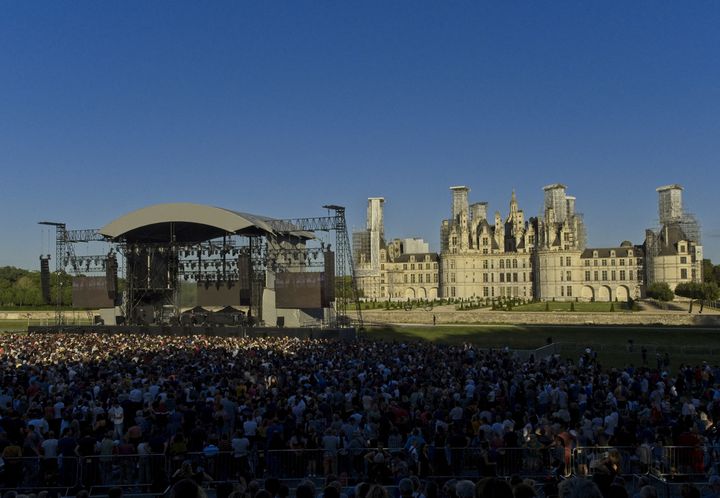 If he no longer jumps on stage as in the great hours of his former rock trio The Police, his voice, his pace and his charisma retain an insolent freshness and youth. Sting, 70, one of the most famous English singer and bassist in the world of rock – and beyond – for more than forty years, put on a memorable show on Tuesday June 28, a few wingbeats from the Château de Chambord, in front of more than 20,000 spectators.

Initially planned for 2020, postponed twice due to the Covid-19 pandemic, the concert of the co-founder and songwriter of the group The Police was finally able to be held in the royal setting of the “Chambord Live” festival which saw him succeed three groups and artists who had been performing since the afternoon, including his own son Joe Sumner for a set between pop, folk and confidences in French, and whose voice sometimes reminds us of that of his famous father.

Initially, Sting’s 2020 tour was supposed to closely follow the release of an album titled My Songs (2019) for which the singer re-recorded several of his hits, including the Police era and solo career. A large part of this revisited repertoire made up the set-list for the Chambord concert, supplemented by three songs from the latest album The Bridge (2021).

9:20 p.m. Sting, yellow jacket over a red and black striped t-shirt, attacks his singing tour in force with Message in a Bottleone of the highlights of the Police album White Regatta (1979), an absolute classic restored with the original rock intent. We are far from the slow, stripped-down, rubato guitar-voice version (freed from rhythmic constraints) that the artist had taken to performing on stage in the first years of his solo career. The concert is under the sign of rock, groove, beautiful improvisations of the group and tributes to the aesthetics that Sting likes. The singer continues with Englishman in New Yorka nod to jazz and a great solo success, where the harmonica replaces Branford Marsalis’ soprano saxophone, followed by a marvel from the Police era, Every Little Thing She Does is Magic. Something to deeply move the more than (twice) twenty years.

Sting has surrounded himself with a hard-hitting and eclectic group where we find artists with whom he has already performed in recent years, at the head of which guitarist Dominic Miller, a faithful accomplice for thirty years, but also the latter’s son, Rufus Miller also on guitar, the excellent Shane Sager on harmonica, Zach Jones on drums, Kevon Webster on keyboards and vocal soloists: Joe Sumner – this tour is also a family affair – , Melissa Musique and especially Gene Noble whose airy vibes and velvety voice will be a sensation later on Shape of my Heart. In the meantime, Sting, feline silhouette and warm smile, continues his festival of nuggets with If You Love Somebody Set Them Free, big groove sound that was Sting’s first solo single, still effective 37 years after its release, with its invigorating arrangements, backing vocals and chorus that gets the audience swaying. During this time, as night gradually falls, the Château de Chambord changes color according to the lighting of the concert: parma, peach, sky blue, vermilion…

After a series of songs from the latest album The Bridge (including the opening title Rushing Water)Sting reminds us of a nugget from 1993, Seven Days and his “Thousand Rainy Days” in the last few seconds, nice self quote from Every Little Thing She Does is Magic… Two other great hits from this era (album Ten Summoner’s Tales), Shape of my Heart with its famous soulful guitar intro (the song was used for the film Leon de Besson), and of course Fields of Gold, delight the crowd. In this 21st century, there is an unmistakable sign to attest to the popularity of a song: a tide of smartphones rises above the heads from the first notes. For a few seconds, we think back with nostalgia to that distant era when telephones did not exist and where you had to hide your camera with ingenuity if you hoped to bring back a stolen image of your idol’s concert. We think about it for a few seconds… and then we take out our smartphone.

Sting revisits different musical universes with two songs from 1999, brand new day and its Motown spirit (Stevie Wonder plays harmonica on the record, replaced here by Shane Sager), Desert Rose and its oriental sounds, and it slips from Bob Marley in the middle of a frenzied sequence of cult Police songs, Walking on the Moon and So Lonely. We also savor this Wrapped around your finger sung completely differently from the 1983 version, and this King of Pain that we loved so much, chained with the classic Every Breath You Takethird (and not the least) extract from the sublime album Synchronicity de Police, as the official finale.

Two reminders close the singing tour: Roxane, cult piece from the beginnings of Police, with its famous rock intro on the guitar, whose audience takes up the chorus in chorus while red lights restore the “red-light” (red light) of the song; and finally the poetic Brittle (1987), for which Sting accompanies himself on an acoustic guitar, with the reinforcement of a violin and a backing vocalist. “Thank you goodbye !”, launches the English singer in French, at 10:56 p.m., to a delighted audience.

On the public side, several generations will have crossed paths, with a good proportion being between their forties and sixties. Among the spectators interviewed before the concert, many live in the region and took the opportunity of this mini-festival in a dreamlike setting to discover Sting on stage. Bernard-Yves, who lives 10 km away, has been listening to Sting for a long time. “I have at least four or five CDs at home. He is a very beautiful character, very committed, in addition to his music. I know that Sting visited the castle earlier. I tried to ‘to enter but I didn’t have the right tickets! he laughs. A little further on, three friends, Amélie, Valérie and Julie, aged 30 to 40, were jubilant before kick-off. Originally from Blois, they had reserved these places to make a birthday present to one of them, Valérie, in 2020, before the pandemic. In the meantime, Amélie, blonde and warm, moved to Nantes but came back especially for the occasion: “The big thing is to see him at Chambord. Sting is someone who does good to the ears. And we need him!”

A family from Limoges – a couple and their teenage son – draws attention: the mother, Nathalie, wears a Sting T-shirt: “I just bought it when I arrived!” The father, Régis, is a musician: “Originally, I love Clapton, and when he did a song with Sting, It’s probably Me, I fell in love with Sting, his voice, his bass! But I already loved Police! I saw Sting live a long time ago in Cognac.” Even people who don’t know his discography in detail appreciate his music and admire the man. “Sting inspires me with great respect, he is concerned about what is happening around him, the world, the planet”, explains Flo. Her neighbor Jess, smiling and sparkling eyes, has just arrived from Hellfest.

At the end of the show, longtime fans express their joy. Fans since 1982, Sébastien and Eveline are thrilled. “We knew all the songs. And in such a site, it’s majestic”, the latter smiled. “We saw a big star today”, enthuses Bruno, who had never applauded Sting on stage before. “I saw him in concert with Police in Royan, under a marquee, in 1980, I was twenty,” recalls his friend Philippe, who had not seen him since. The two friends, who live in the region, admit to having been moved by this concert. Same smile from three younger friends a few meters away, who live in Loir-et-Cher and who discovered Sting on stage for the first time. “In terms of sound, honestly, it was great, compared to the concerts we do in Paris, or at the Stade de France where there are echo problems”, observes one of them, also named Bruno, with a broad smile. “And the setting is superb.” Only downside to this idyllic picture: the monster traffic jams to leave the site. Just to get out of the parking lot after the show, the wait was just endless.

Sting in Chambord, a majestic concert in an enchanting site: we were there