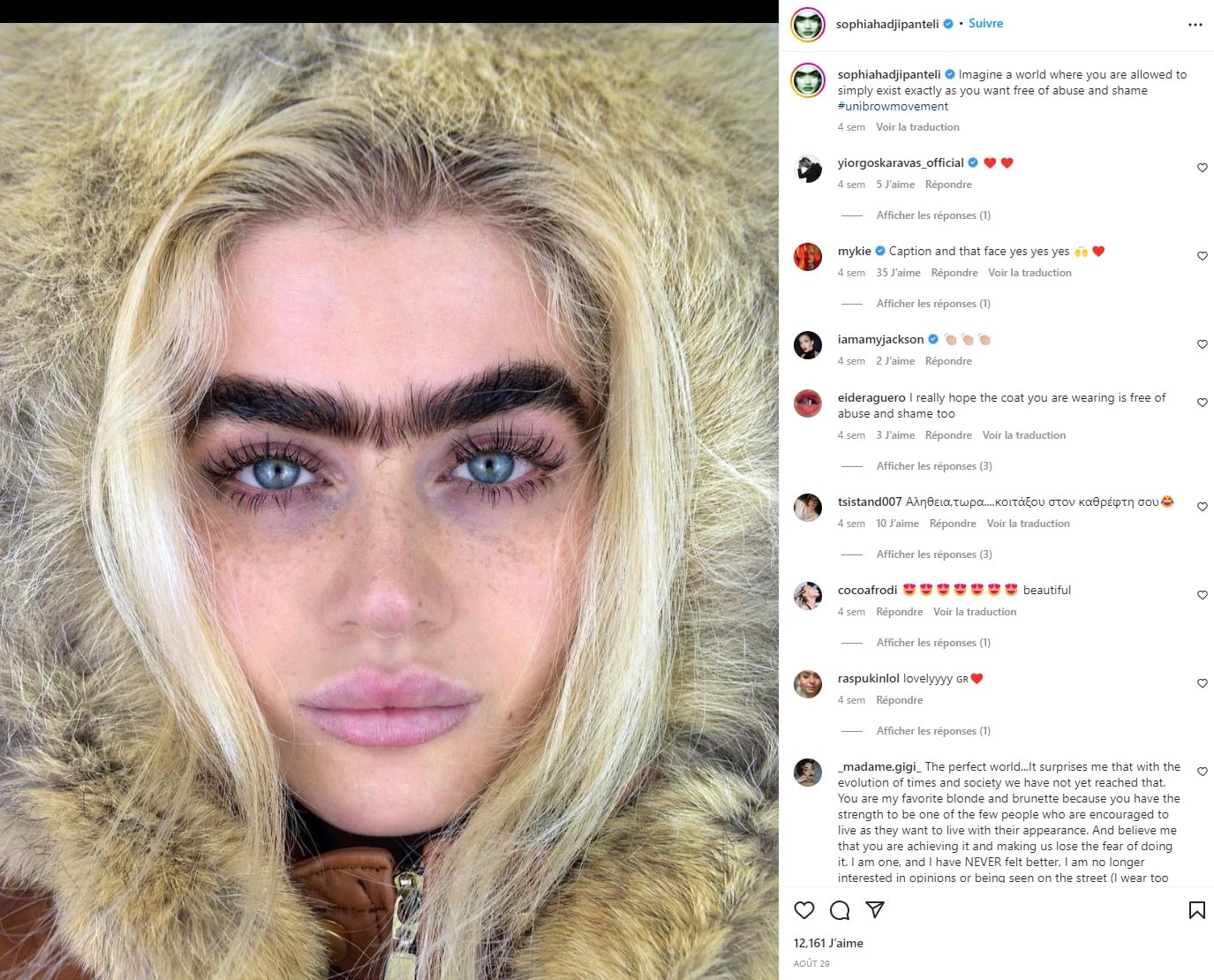 Long mocked by her monobrow, Sophia Hadjipanteli knew how to transform her difference into a strength that even influenced an entire generation.

Since then, feminine beauty has always been the subject of a particular injunction. This time when the criterion of beauty in women is to be thin but above all hairless is finally over.

Today, beauty rhymes with authenticity and naturalness and brands have understood this well. Sophia Hadjipanteli has become, in spite of herself, one of the symbols of this inclusive beauty.

Discover in this article the story of the young woman who broke the codes of beauty just with her hair.

Read also : Before they were famous, these 20 stars had a very different job

The Monobrow: a family story

In recent years, we have witnessed a real revolution. Women assume themselves as they are and we love that.

Thanks to inclusive beauty, brands now take into account each morphology and skin type, like the Fenty Beauty brand, which has offered more than 50 different shades of foundation since its launch.

Even the giant Victoria Secret with its famous angels had to give in by including curvy models in its parades.

Sophia Hadjipanteli, she perfectly embodies these women who refuse to submit to the injunction of beauty. Indeed, the young woman dared to free herself from the diktat of predefined beauty by proudly wearing her single eyebrow.

Born to a Cypriot father and a British mother, she always taught him to take charge of his eyebrows. Apparently, her mom often reminded her not to wax them too much because they look beautiful.

Moreover, when we ask the young woman the person who inspires her the most, she answers without hesitation that her role model is above all her mother.

For her, the single eyebrow is part of her story.

“If I look at my grandmother, my aunt, all my uncles, my brother, they have mono-eyebrows. It wasn’t even a problem. That’s what inspired me. It is my family. My culture. When people say it’s gross, what’s gross about facial hair? Or elsewhere ? “, she explained in New York Magazine.

It took time for Sophia Hadjipanteli to accept herself as she is.

It all started two years ago, she decided to stop hair removal during her holidays in Cyprus. When she returned to England, her grandmother remarked on how beautiful she looked like this.

And there is the click: “I love myself and I don’t see why I have to do this if I don’t like waxing,” she said.

The young woman knows it, her monobrow fascinates as much as it disturbs. Sometimes, a bit out of a spirit of provocation, she dyes him black when she has blond hair.

Her authenticity was very quickly sought after in the fashion world until she became the face of various major brands. She advocates naturalness, even if it means attracting the wrath of certain Internet users. But whatever !

The model intends to fight against the standards of beauty that have persisted for too long according to her.

Already as a teenager, Sophia had to face waves of negative criticism when she decided to take on her appearance. But these criticisms in no way reached the young model, on the contrary, it pushed her to assert herself even more as a woman.

She says seeing her single brow on the cover of Glamor UK magazine was a source of pride and satisfaction.

Having become a true model for her generation, she encourages others to assume their natural beauty. She states that the decision to keep her monobrow or not is up to her and that no one should impose anything on her. “And I can love my unibrow — and if I don’t want it, I can always tone it down,” she said.

But alongside the negative comments that go as far as threats, Sophia receives plenty of messages of support. Some Internet users have even called her the modern-day Frida Khalo.

It is in this spirit of self-acceptance that the young woman launched the monobrow movement or #UnibrowMovement. With this hashtag, she hopes to normalize natural beauty that society views as atypical.

For the young woman in any case, giving up razors and tweezers seems to have been the best decision of her life.

Sophia Hadjipanteli: a model with a different standard of beauty but who leaves no one indifferent