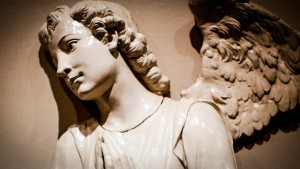 The month of September, traditionally devoted to holy angels, opens us up to an invisible world that intrigues. There are good angels and bad angels: what are their actions, their power and their limits? The teaching of the Church enlightens us: good or bad, the angelic power stops at the threshold of our will.

God has appointed angels to watch over us. However, it is necessary to bear in mind the limits of their actions in order to better perceive what we can expect from them, and what remains within the province of God. This clarification is all the more useful since an abundant literature on the angelic world can mislead many believers concerned about leading their life in the company of their invisible brothers.

A limited influence that reminds us of our responsibility

The upsurge in requests for exorcisms among Catholics (and others), as well as curiosity about the angelic world and its influence, could suggest that angels would be able to penetrate into the most remote corners of our minds. . It is not so. This important detail will reassure people who are wondering about the margin of freedom left to us by a world populated by quite mysterious invisible spirits. Indeed, underlining the limits of the actions of angels on us, in addition to confirming our condition as free creatures, reminds us of our responsibility. We do not have the right to invoke the active presence of angels to exculpate ourselves morally.

But where to place this limit to the (undeniable) angelic influence on us? If it is true that the angel enlightens us, that he walks with us, that he encourages us to do good (or bad) things, causing good or bad actions, on the other hand it is never in his power to enter into our will (and into the intelligence that enlightens it) where judgment and action on our part are decided. Only God has access to this sanctuary of our freedom and our will. The only guest of our spiritual intimacy is the Holy Spirit. Let us listen to Saint Bernard on this subject:

“The angels are in us by the good thoughts they suggest to us and not by the good they operate there. They exhort us to good but they do not create it in us. On the contrary, God is in us in such a way that he directly affects our soul, that he makes his gifts flow there, or rather, that he spreads himself there and makes us participate in his divinity. The angels are with our soul, but God is inside of it. The angels live with her, under the same roof, but God is with her like her life. »

The limited scope of angelic action

The angel does not know the future. His intelligence is only able to foresee it (in part) by the chain of causes and effects. Moreover, he remains powerless to pierce the secret of hearts. As we have above, it does not inhabit the soul. Only God resides in our spiritual intimacy.

But why do we say of someone who almost infallibly guesses the psychology of each other, that he has an angelic knowledge of them? In fact, the angel pierces the deliberations of our heart only according to what we show from the outside. Being pure spirit, and endowed with a keen intelligence, he is able to deduce from our gestures, from our words, what lives in our heart. However, he never knows directly what is happening in our hidden interiority.

Read also:
When were angels created by God?

Since the angel cannot access the sanctuary of our will, how does he act on us? Mainly through its influence on our affectivity, our senses, our memory and our imagination. However, our freedom remains master in us to refuse these affects and these images. The angelic power stops at the threshold of our will. Only God can act on it. Satan may work us with impure images, equivocal memories, painful feelings, we remain free to reject these fantasies, these indirect appeals to resentment, revolt or despair.

God can act on us because He gives Himself to us

God is the only one who can act directly in us and on us, and this for two reasons. First, because He created us. So He knows us better than the angels. Moreover His knowledge is a loving knowledge. But only love touches the heart.

The second reason why God alone is capable of acting on our will and our spiritual interiority is that He gives Himself up to us without reserve. By this gift of Himself, God reveals to us and shows us His love. Because God created everything out of love, especially spiritual creatures (angels and men). The angel, like us, remains a creature. He will never be able to give himself to us as God does by grace. The angel gives neither life, nor being, nor salvation. He serves us but does not surrender himself to us as he is—which explains his limited influence. Only God gives His life. This is why He is also able to touch our will and move us from within.

Are there “possessed” souls?

In conclusion, it is legitimate to wonder if there are people “possessed” by the devil. According to what we have just explained, is this not an inaccurate appellation? In fact, by possession, we must understand a consent of the soul to welcome the demonic will in it (unlike “infestation”, when a person is attacked by the demon without his knowledge). Possession can take many forms, and result from many causes. Indirect causes: indulging in spiritualism or one form among others of occultism, breaches through which satanic influence infiltrates man. More direct causes: pouring into Satanism, excessive pride, or even obstinacy in the career of evil. Generally, the degree of “possession” is left to the appreciation and discernment of the exorcist (in cases where the possessed asks for his help).

Read also:
When are guardian angels assigned to us?

However, let us remain convinced that the power of Christ, for those who call on an exorcist priest, is always superior to that of the devil. Christ is the chief of the angels. He alone possesses supremacy over all creatures. For those who have the humility to pray to him, no invisible power is to be feared.

In pictures: the hierarchy of angels

Should we fear the influence of angels?