If the renewal claimed by Emmanuel Macron for his second presidential term means that he aims to renew, in the sense of renewing, the budgetary “whatever the cost” of previous years, we can say that the 2023 finance bill or PLF 2023 presented last Monday in the Council of Ministers responds perfectly to this ambition. It is only to compare the successive opinions of the Court of Auditors or the High Council of Public Finances (HCFP) rendered each year on the subject to be convinced of this.

With truly remarkable regularity, one organization or another points out the great fragility of our public accounts because of their uninterrupted drift in spending, deficits and the increase in debt, both in absolute terms and in compared to our neighbors in the euro zone who are nevertheless faced with the same situation as us. The magistrates of the rue Cambon sometimes even come to doubt the seriousness of the forecasts as the elements submitted for their assessment are ” incomplete “(like last year for the PLF 2022) or so much the announced budget trajectories lack ” credibility “.

Nothing much different this year. Once again, the HCFP emphasizes in its notice how the government deludes itself with overly optimistic macroeconomic assumptions while postponing the restoration of the public accounts for lack of initiating a real, thoughtful policy of reducing expenditure:

All in all, although based on optimistic assumptions, the Government forecasts for 2023 a simple stability of the actual public deficit, a limited improvement at best in the structural balance and virtual stability of the debt ratio. The recovery of public finances thus looks set to be slow and very uncertain in 2023.

And to call again “the greatest vigilance”in other words to a policy of “control of expenditure coupled with the search for greater efficiency thereof”.

Main bone of contention between the HCFP and the ministers of Bercy, the growth rate retained for 2023. The government has opted for 1% while the main macroeconomic forecasting organizations are rather counting on 0.5 or 0.6% for France . For the HCFP, the overvaluation contained in this 1% results from overly generous consumption and investment assumptions “in a context marked by a high level of uncertainty”.

Not at all, immediately retort in substance the Minister of the Economy Bruno Le Maire; our growth forecast is “credible and proactive”.

Should know. Credible or proactive? The two terms are located on such different levels that in a way they are mutually exclusive. In this field of public accounts, voluntarism consists in setting an objective known to be difficult to achieve and trying to achieve it as well as possible through unprecedented efforts, while credibility begins rather with the humble analysis, without showing off, of what can reasonably be obtained. We know Bruno le Maire has a problem with numbers. He, the literary, novelist and essayistwould it also be so with words?

But as for being credible and proactive, it would obviously be nice if the government showed these admirable qualities when it comes to public spending.

It is true that according to its forecasts and calculations, they would go from 58.4% of GDP in 2021 to 57.6% then 56.6% in 2022 and 2023 (excluding tax credits). From one year to the next, they would fall in volume, i.e. deflated in relation to their growth in value, by 1.1% in 2022 and 1.5% in 2023. But the HCFP reports rightly that the relevant inflation correction to be made to them is not that of consumer prices (CPI) but that of GDP prices, which is more adapted to the evolution of the prices of the components of public expenditure.

The graphs below, taken from the HCFP’s opinion, represent the variation in public expenditure in 2022 (left) and in 2023 (right). The blue bars show value growth while the orange and gray bars show volume growth – deflated by consumer prices in orange and deflated by GDP prices in grey. This last adjustment shows that total public expenditure would increase in volume by 1.4% in 2022 then decrease by 0.8% in 2023 (part to the left of the dotted lines):

If, now, we consider only the “ordinary” part of public expenditure, that is to say if we remove the exceptional expenditure linked to the Covid-19 pandemic, the recovery plan and more recently those intended to soften the rise in energy prices, we observe an increase in volume (deflated by GDP prices) of 3.5% in 2022 and 0.7% in 2023 (see graphs above in the part to the right of the dotted line).

A smaller increase in 2023, all of this is going in the right direction, one could easily say to oneself. But for the HCFP, the situation remains worrying insofar as Bercy seems to have simultaneously underestimated a number of “ordinary” expenses, in particular operating expenses, or relating to health insurance.

Above all, the fact of analyzing public spending by setting aside exceptional spending unfortunately shows that the basic trend of our economic and social model, namely a spending drift never thwarted other than by empty promises, continues its mad race. It is convenient to be able to attribute it momentarily to covid and to the disturbances induced by the Russian war in Ukraine, but even without that, the French government knows only one public policy, that of “more means” perpetually demanded of all shares and extensively implemented.

In this respect, the ambitions displayed by the ministers of Bercy at the very beginning of the PLF 2023 are particularly revealing. It is in fact about “protecting our social model while achieving full employment in 2027”. No sooner said than done, so to speak. It is indeed a question of hiring 10,764 more people in our already bloated public service (5.7 million people) without asking a single question about the organization and efficiency of public services.

As for the “savings”, apart from the fact that they are poorly documented, they are essentially based on the intensification of the fight against tax and social fraud and on the gains expected from the pension reform, which remains to this day very hypothetical and poorly defined. At the same time, the debt burden continues to increase, 18 billion more next year…

As usual, I have summarized in the table below the main data from our public accounts. You will find there 2012 (election of François Hollande) and 2017 (election of Emmanuel Macron), then 2019 (year before the Covid-19 pandemic), then 2020 and 2021 (pandemic years) and finally a projection of the year in progress (in orange) and forecasts for 2023 (in red).

Prmain data of our public finances and PLF 2023

Note : 2022 is a year-end estimate and 2023 a forecast. Expenses marked with an * are shown excluding tax credits. 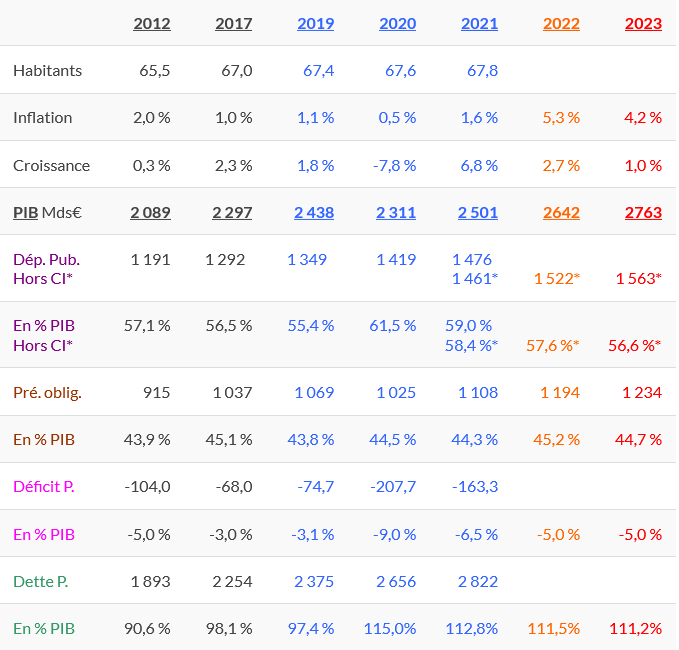 Bruno Le Maire, being a very serious minister, very turtleneck if I dare say, he had sounded the alarm before the summer. “We have reached the alert level on public finances” was he exclaimedfull of his mission as a wise and responsible minister, as if he had no part in the degradation he denounced. A distraction, no doubt. Or the sudden and fleeting feeling of losing his footing in the ocean of satisfaction that usually engulfs him.

Anyway, you can count on him to ensure that the debates on the PLF (which should begin at the beginning of October in the National Assembly) do not lead to an irreparable deterioration of our public accounts – always as if his own PLF were not already irreparably plagued by deficits :

We approach this #PLF2023 with a spirit of compromise. But there is a red line: no new spending that is not funded. To all those who propose additional expenses, I repeat: France is within the euro.

The fact is that this year, because of the relative and no longer absolute majority of the presidential party and its allies in the Assembly, we will have to seek a compromise. The question of the procedures for adopting the PLF has almost become more burning than that of its content. Will the government try to introduce its pension reform in the Social Security Finance Bill (the elements of which are included in the PLF)? Should he resort to 49.3 to have it passed without a vote? In which case he would expose himself to one or more motions of censure from the opposition parties.

The differences between the oppositions and the government are not lacking, but it is clear that the proposals of the former hardly go in the direction of a reduction in public spending. For the LFI President of the Finance Committee Éric Coquerel, it’s very simple:

The expenditure planned by the State this year is largely insufficient given the ecological and social situation.

For the Rassemblement national and the LFI, it is scandalous not to tax superprofits. At Les Républicains, we probably believe that “the state does not question itself about over-administration”but we would nevertheless like either prolonged the rebate on the price of fuel at the pump beyond its scheduled end in December.

In other words, once again, it promises.

PLF 2023: we take the same drifts and start again