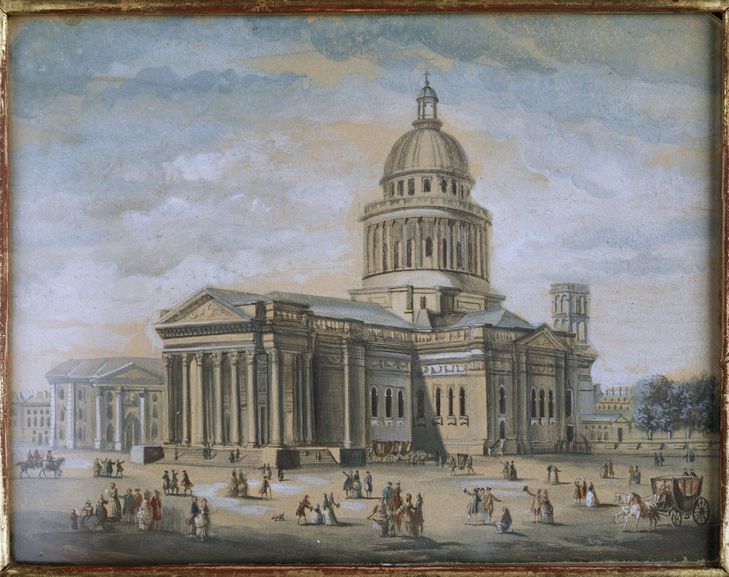 The liturgical layout of the new Sainte-Geneviève church was barely finished, in 1791, when the parliamentarians of the National Constituent Assembly assigned the building to the cult of the heroes of the nation (decree of April 4). This is the birth of the Pantheon. “Since the storming of the Bastille, the idea of ​​the construction of a funeral place perpetuating the glory of the martyrs of the defense of freedom animated the spirit of the deputies, writes the historian Jean-François Decraene (1). The Sainte-Geneviève church, in the process of being finished, is an empty monument offered to the appetites for secular sanctification of the representatives of the people. »

Unsurprisingly, the decoration changes. Under the supervision of the architect Quatremère de Quincy, the radiant cross surrounded by clouds and angels was removed from the pediment. Same fate for the heads of cherubs, the palms, the diamonds, the bouquets, the medals and other religious ornaments executed inside. Saint Genevieve, Saint Peter, Saint Paul and the great figures of the Old Testament disappear from the walls, where traces of scratched paint can still be seen today (for example above the exit from the crypt, near of the shop).

Above all, the architect walls in the 39 side windows – we can still see their location on the walls from the outside, unlike the color of the stones –, generating this indirect, zenithal light which comes from the dome, covered with frosted glass. In the nave, the new decoration is of antique inspiration. A crowd of allegorical statues representing Philosophy, Law, Force, Fatherland, or even Liberty now occupy the peristyle. On the proposal of the Marquis de Pastoret, ” Great men the grateful country “ is inscribed under the pediment.

But immediately, the Republic hesitated. Shortly after the shrine of Saint Geneviève, it is now Mirabeau’s ashes that are being expelled from the national necropolis. Deputy of Aix and extraordinary orator, Mirabeau had however been the first great man to enter the Pantheon, on April 4, 1791, under the influence of a formidable emotion. “Mirabeau’s death (April 2, 1791, Editor’s note) is a commotion, the rare moment, in the history of France, of a mourning shared in anguishsays the historian Jean-Paul Desprat (2). The Assembly adjourned, some in the streets cried assassination so much Mirabeau – criticized, decried, booed, often moreover by the same people who mourned him that day – seemed to them inseparable from the prodigious events taking place. ‘accomplish. »

Since 1789, “the orator of the people”, that is his nickname, with social origins, however aristocratic, had been able, at the end of an incredible life made up of libertinage, gambling and stays in prison, to incarnate almost alone the revolutionary momentum. The afternoon of his death, in the Assembly, Abbé Sieyès describes orphan deputies “still searching in the air for bursts of his voice”. The idea of ​​burying him in the Champ-de-Mars, under the altar of the feast of the Federation (July 14), is mentioned. But on the morning of April 4, the Duke of La Rochefoucauld suggested transforming Sainte-Geneviève into a Panthéon.

Painting on canvas representing the Sainte-Geneviève church in 1790, before the windows of the building were resealed. / ALAIN LONCHAMPT/CMN

The funeral takes place the same day, says Jean-Paul Desprat, “in the presence of 300,000 people, almost half of the city of Paris! ». However, on November 13, 1792, shortly after the fall of the monarchy, an iron cabinet was discovered in the Tuileries castle. Inside, compromising documents reveal secret relations between Mirabeau and the court. On the proposal of Marie-Joseph Chénier, the deputies then decided to depantheonize ” the traitor “whose remains were transferred to a common grave in the Clamart cemetery in Paris, along the Jardin des Plantes (at 17 of the current rue du Fer-à-Moulin, in the 5th arrondissement).

The birth certificate of the Pantheon is therefore a failure. It must be said that the question is abysmal: what is a great man? In the first days of the Revolution, the diary of another pantheonized, Jean-Paul Marat, retains “six human types” likely to compose the assembly of great men, as the historian Mona Ozouf recounts (3). There is, unsurprisingly, the warrior who risks his life. The other five? “The philosopher who enlightens the nation, says Marat, the legislator who gives him good laws, the magistrate who enforces them with integrity, the orator who zealously espouses the defense of the oppressed, the generous merchant who brings back abundance in times of scarcity. »

Despite the clarity of the presentation, the ashes of Marat will also be expelled from the Pantheon on February 14, 1795. The round trip has something cruel: the remains of the martyr of the Revolution, murdered in his bath by Charlotte Corday, had entered the old church on September 21, 1794, at the very moment – ​​to the nearest second – of the expulsion by a side door of the ashes of Mirabeau. The staging was intended to be educational, underlined by the speech of Jacques-Louis David, the great organizer of revolutionary funerals: “Let vice, let imposture flee from the Pantheon. The people call there the one who was never wrong. »

But precisely to stop making mistakes, the Convention decides that we can only award the honors of the Pantheon ten years after the death of a presumed great man. This is the reason why the ashes of Marat are installed in Saint-Étienne-du-Mont, which no doubt suits better the Montagnard deputy who mocked during his lifetime the claim of the Constituent Assembly to designate great men: “I do not stop here at the ridicule offered by an assembly of low, crawling, vile and inept men, constituting themselves judges of immortality. How are they stupid enough to believe that the present generation and future races will subscribe to their judgments?»

The feverishness of the choices is revealed more quickly than Marat had anticipated. As Mona Ozouf remarks, it is striking to note that each of the proposals for pantheonization made after December 1792 is accompanied by a proposal for exclusion: “Do we want, in nivôse year II, to welcome the ashes of Chalier? It is to wish the cancellation of the honors granted to General Dampierre, suspected of intelligence with Custine. Are we talking, in Floral Year II, of inscribing the names of Haxo and Moulin on a black marble column? To this proposal of Lakanal, Tallien responds by demanding that we depend on the vault the scarf of Simoneau…” And the historian concludes: “What the Revolution comes up against here, it is on the capacity of its great men to constitute an assembly.»

Westminster, or the Erase of the Crown

Tomb of the Unknown Soldier, in Westminster Abbey. / VICTORIA JONES/AFP

Westminster Abbey, a royal necropolis? The London church, famous for having hosted some of the last princely weddings, was already no longer the preferred burial place of British kings in the 19th century. The necropolis, in fact, was never reserved for them. And of the more than 3,000 bodies now buried in Westminster, only a hundred come from royal families (including 16 or 17 monarchs).

Above all, during the 17th and 18th centuries, the burials of nobles and servants of the monarchy around the royal tombs gave way to those of famous Englishmen, as the historian François-Joseph Ruggiu explains (4). “The disappearance in Westminster of the mortal remains of the king and its transfer to the residence – royal but private – of Windsor perfectly symbolizes the gradual disappearance, in particular from the Glorious Revolution of 1688, of the King for the benefit of Parliament, of the Court for the benefit of the Cabinet, and of the Crown for the benefit of the Nation. »

Like the Pantheon, Westminster Abbey today honors the memory of great men, including Jane Austen, author in 1813 ofPride and Prejudice, Isaac Newton, Martin Luther King, Charles Darwin and William Blake. The British Unknown Soldier was buried there on November 11, 1920, the same day of the ceremony carrying his French counterpart under the Arc de Triomphe.