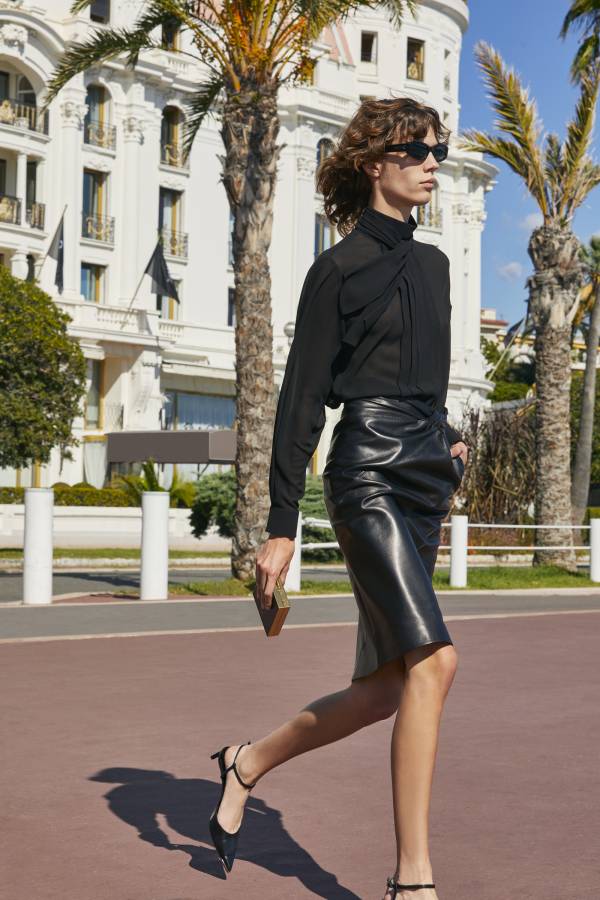 The drone that films the Baie des Anges from the sky exalts our gaze by offering it an impossible perspective. We fly over the sea, the concave arc along which unfolds the Promenade des Anglais and Nice beyond the palm trees, one of the most beautiful views in the world. At times, the flying camera makes inroads into a more intimate atmosphere, close-up of a young woman from behind, in a rhinestone dress with thin straps, delicately placing the needle on a 33 rpm record which plays a few guitar notes. Back above the sea, blue, slack, a September sea on which glides, majestic, a large black liner marked in white with the six letters of Celine. Black screen then, 2021 in Roman numerals. The collection announced is however that of spring / summer 2022. The liner advances, rushes towards the bay, close-up, the double C of the logo on a fin at its top. The disc spins, racing now with bass rhythms. The drone flies over the Negresco, but the famous pink dome of the hundred-year-old palace – which is said to reproduce the shape of the breast of the founder’s mistress – is also renamed with the name of Celine whose six letters culminate in the place of l ‘taught. The drone rotates around the facade. Incursion through a window: five young women in evening dress, rhinestones, thin straps, from the back, turn towards the paneling of a blind wall. Again the visuals get carried away, a model descends the hotel staircase, the drone pretends that it does not see it, since it has already drifted towards the Observatory of Nice from where it flies over the bay and again circles around the Negresco like a fly around a confectionery.

Clearly, in this new virtual parade, Hedi Slimane puts the spectators in condition, heats the room as in the first minutes of a rock concert. And 3, 2, 1, here is the first model that tumbles down the famous promenade where flags are flapping in the colors of Celine. Clever floating shirt with thin stripes and white collar, white Fedora hat with black ribbon, gray trousers, straight, we barely have time to see the chain of the bag shine, probably the Triomphe model, whose links imitate the chain that surrounds the Arc de Triomphe in Paris, which inspired Celine’s first logo. The second model is already running, black jacket unzipped. The image is superimposed on that of the Observatory in black and white, and we see that the opening of the jacket redraws that of the monument. The passages are done at full speed, you have to go back, stop the image to observe the details. The record is spinning, hotel facade, palm trees, gardens, a third model passes by, white hat, short-sleeved overshirt, rounded shoulders. A fourth, black jacket covered with plastic sequins, aquatic effect, vaguely military pants. Between two views of Nice, logo earrings. And then a long white sweater, loose stitches, on a short skirt. A bag in the form of a camera case. A yellow, pale gray and white mohair sweater. Flair jeans, flared at the hem, raincoats, marinières. Glasses with thick frames, not too big, cat eye or oval. Tartan caps. Camouflage parkas. 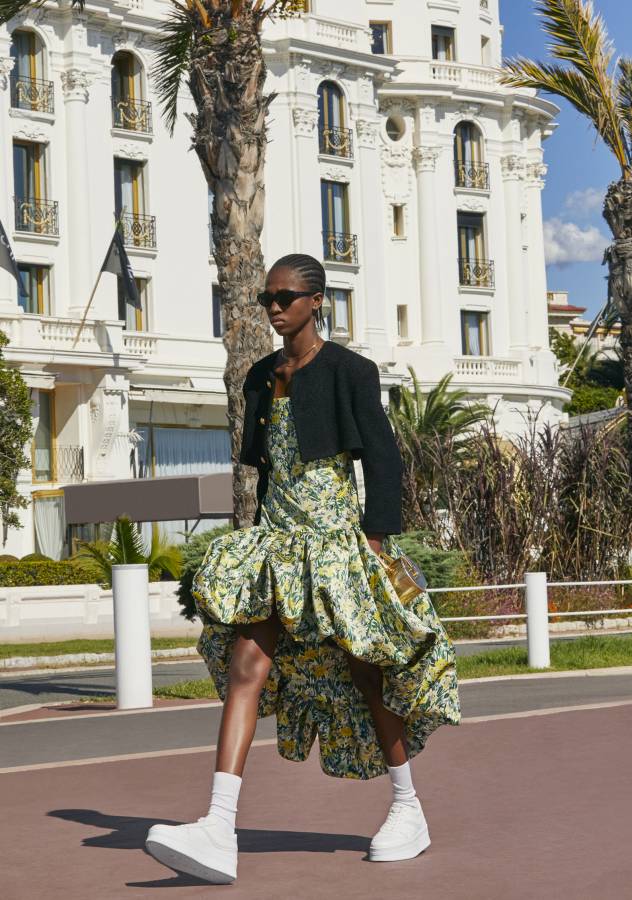 Regardless of the details, let’s look at the moon rather than the finger: clearly, Hedi Slimane does not want to show us clothes and accessories so much as a general look, a society apart, the privileged lifestyle of this elite, once almost exclusively Parisian, who was the first clientele of the house. The aristocracy of the 16th arrondissement, the upper middle class of Boulevard Saint-Germain, ivory tower silk scarves, culotte skirts, horsebit moccasins, loden coats, codes rendered timeless by materials of stainless quality, transmission of signet rings emblazoned and pearl necklaces, values ​​and taboos. This is Celine’s past, reinterpreted in firm and upright attitudes, determination and a feeling of invincibility. Up close, it’s ennobled street-wear, hooded jackets and jogging pants immersed in baths of sequins that shine in the sun like diamond armour. Satin varsity bombers. Delicate ball gowns that flashes and strobes will transform into chain mail. In the boudoirs, one prepares as one prepares an assault. The needle touches the last groove of the record. End. In 12 minutes, we will have gone through a film noir, a concert by Lou Reed, an airtight chapter by Robbe-Grillet, a scene by Alain Resnais and the Parisienne on avenue Victor-Hugo.

The drone that films the Baie des Anges from the sky exalts our gaze by offering it an impossible perspective. We fly over the sea, the concave arc along which unfolds the Promenade des Anglais and Nice beyond the palm trees, one of the most beautiful views in the world. At times, the flying camera makes inroads into a more intimate atmosphere, close-up of a young woman from…

On the Baie des Anges, the reinvented past of Celine