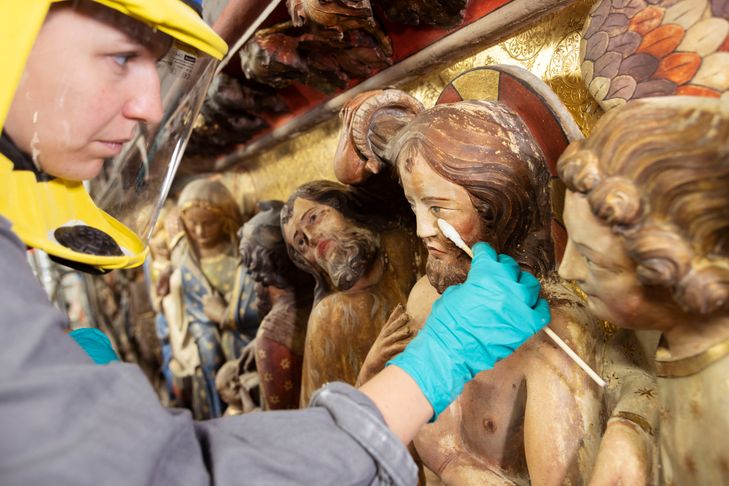 On this chilly mid-December morning, onlookers on the Ile de la Cité have little regard for Our Lady. Since the spectacular operation to dismantle the scaffolding melted in the fire, completed in November 2020, the monument could seem asleep, despite the movements of the four huge cranes. How can you guess that inside a titanic construction site is giving a second life to the most famous of medieval cathedrals?

Two years ago, in December 2020, The cross was able to visit the site where securing the building was still the priority. Two side chapels served as laboratories for the restoration of the paintings, and the first stone cleaning protocols were tested. Twenty-four months later, the effort of the 300 women and men who work on the site has already been rewarded, as we have seen. Despite the incredible metal corset that invades almost the entire volume of the nave, the transepts and the choir (1,200 tons of scaffolding on 15 levels!), the stone reveals its new brilliance.

The professionals proceeded to a phase of cleaning by aspiration then to the installation of a film of natural latex which finished extracting all the impurities and the lead pollution by detachment. The limestone was then covered with a harmonizing patina to unify the color of the stones. Ten or twenty meters from the ground, we can see craftsmen cleaning each marquee with a brush. In total, these are 42,000 m2 facings that will soon have regained their fairness.

In the chapel of Saint-Marcel, one of the large chapels of the choir, the work carried out in recent months is impressive. The restoration of the paintings is about to be completed and the decorations, which had not been cleaned since their creation by Viollet-le-Duc in the 19th century, have regained all their luster. A small surface, left as it was before the fire, allows you to take the measure of the change: the dirt had simply caused the designs and colors to disappear…

Now the chapel vibrates with colorful hues. On the veins of the columns, sky blue, emerald green, red and pale pink coexist. On the walls, stylized flowers and foliage alternate with more geometric ones. On the frescoes, the figures of the scenes from the life of Saint Marcel have regained their light complexions, their golden halos and all their expressiveness.

The very good condition of the paintings

“The choice of colors made by Viollet-le-Duc may seem surprising, a bit daring, but in fact it works perfectly. It’s a wonderful set.”testifies Marie Parant, independent restorer of paintings, site manager. “Viollet-le-Duc has really shown great creativity: even if the chapels seem to look alike, no two are identical. Their common point lies in their composition, in three superimposed registers, and in the blue skies dotted with golden stars found in each. »

The restoration was punctuated with pleasant surprises.After the cleaning stage, the paintings turned out to be in good condition and only a small area, 10 to 15%, had to be touched up. “This is due to the high quality of the implementation, explains Marie Parant. Viollet-le-Duc knew how to work: he used beautiful pigments and beautiful binders, he respected the drying times… We are in front of very good quality. » By composing the neo-Gothic decoration of these chapels, the architect subscribed to the style of his time, which can be found for example in the church of Saint-Germain-des-Prés, in Paris, “but he also added his touch by using an off-white shade that mimics the color of the stoneremarks the restorer. You could say he brought architecture into the picture. »

Four of the twelve chapels with important painted decorations are now completed or about to be. This is the case of the Saint-Ferdinand chapel, placed in the northern part of the choir. Behind a huge white tarpaulin which completely obstructs the entrance, it is now protected from the dust of the rest of the site and already seems to be waiting wisely pilgrims and visitors who will return at the end of 2024. When you cross this temporary screen, the alcove gives an idea of ​​the atmosphere that the monument will give off when it reopens: lightened stained glass windows, dazzling paintings, immaculate statuary, deep black ironwork without any trace of dust…

Figurative scenes from the life of Christ

Right in the center of the cathedral, another project is progressing with enthusiasm: that of the enclosure of the choir, a long relief carved in a band over several meters. On the north side, it displays figurative scenes drawn from the life of Christ, from the Visitation to the Mount of Olives. Created in the 14th century by the architect Pierre de Chelles, restored in color in the 19th century, this complex had also suffered greatly from time. Thanks to the patient care of three restorers, these representations with a refined and peaceful style, reminiscent of Romanesque statuary, are in the process of regaining all their freshness. This is also the case of the elements that the imaginative spirit of Viollet-le-Duc has placed around, such as these small light brown animals, half puppies, half rats, which seem to watch over visitors…

The restorer Maud Pouliot on the site of the enclosure of the choir. / Patrick Zachmann/Magnum Photos

The restoration work has, here again, been very satisfactory. “With a small cotton ball, we kind of ‘massaged’ the surface to capture the dirt”explains Maud Pouliot, restorer of paintings in the Marc Philippe workshop. “The result is already impressive, the whole regains all its coherence”, she rejoices, pointing to the golden brocade-patterned background, which has regained its subtle shine.

In the choir, the cleaning phase of the enclosure will be completed at the beginning of 2023 and the final objective of the restoration will then have to be discussed. “Do we have to go further? asks Maud Pouliot. Replace small fallen parts that we have found, such as fingers or gilding elements? Fill gaps and, if so, which ones? All of this will be the subject of choices in consultation with the public establishment, the project manager and the regional directorate of cultural affairs. »

About thirty meters higher, the repair of the vaults is also progressing rapidly. That of the south transept, which had not been destroyed during the fire, has been completely renovated, revealing a surprising keystone from which emerge two heads of red monsters with golden teeth. One of the thousand and one surprises that will be revealed to the general public the new cathedral, in 2024.

The wooden hangers on which the keystones (cut stones) will be placed to form the vault of the transept crossing, which collapsed on April 15, 2019. / David Bordes/Public establishment responsible for the conservation and restoration of the cathedral

The vault of the north transept, largely pierced by the fall of several structural elements the evening of the fire, is now rebuilt and in the drying phase. Arnaud Morançais, stonemason within the Lefèvre company, is the site manager who directs the work of 35 employees. “There was no reuse of the stones fallen during the fire because they were too damaged”, he specifies. All the limestone blocks come from quarries in Oise and Aisne carefully selected by experts.

For the team of Arnaud Morançais, the major work to come is the construction of the vault of the crossing of the transept, which completely collapsed on the night of April 15, 2019. On the temporary floor, four monumental wooden hangers have been installed, on which the masons will come in the coming weeks to lay the keystones (cut stones) which will make up the four diagonal arches of the vault. They will be joined at their top not by a keystone but by a circle of stone, made up of four parts, called “zenithal oculus”. Before the fire, this compression ring designed by Viollet-le-Duc was decorated with four heads of angels.

Two of them were miraculously found, but in a state that does not allow their reinstallation. On the forecourt of Notre-Dame, a large white hall has been erected to accommodate stonemasons and sculptors. In this vast space, ten lodges (workstations) are equipped with huge suspended vacuum cleaners to absorb stone dust. This is where works Fanny Pieplu, sculptor in the Tollis workshop, who has just attacked the first figure of an angel.

“A very hard limestone was chosen”, discovers this petite woman who, using her pneumatic gun, begins to work the block. At his side, the plaster model made from the original. Guided by a “focusing cross” (a kind of volume compass), it reproduces the exact features of the baby face. If every angel is different, it started with the one that promises to be the most difficult, “because of the curls in the hair”. Fanny Pieplu envisages a dozen days to overcome it, but the working conditions reassure her: “Having such a beautiful sculpture lodge on the site of the construction site is unprecedented. The proximity will allow architects to come regularly to discuss. »

At the height of the restoration, the Notre-Dame site will welcome nearly 500 companions, craftsmen and supervisors – not to mention the quarry workers, carpenters and other organ builders who work in the four corners of France. Rarely has a catering company created such cohabitation, a guarantee of both valuable sharing of knowledge and efficiency in keeping the calendar. The year 2023 will be marked by new crucial stages, in particular the start of work on the framework and the spire which will culminate, like that of Viollet-le-Duc, at 96 meters high.

Closer to the construction site

To monitor the construction site,there is a restore log : The factory of Notre-Dame. Number 4 will be on sale in bookstores on January 11 (€12, for the benefit of the restoration) and is already available on the savoirdesarts website.

The exhibition “Notre-Dame de Paris: at the heart of the construction site” will take up residence at the foot of the cathedral from February 23 (Espace Notre-Dame, 6 rue de la Cité).

The exhibition “Notre-Dame de Paris, from builders to restorers” will be accessible to the public from February 15, at the City of Architecture and Heritage (Palais de Chaillot, 1 place du Trocadéro).

Notre-Dame de Paris: at the heart of the cathedral restoration project