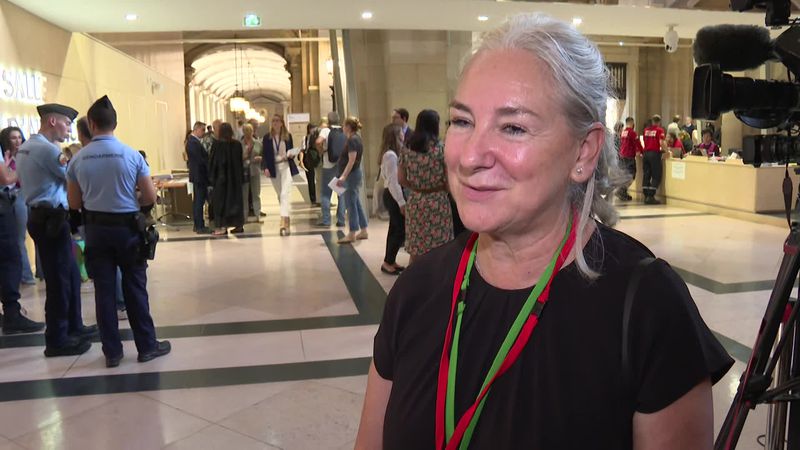 Anne Murris lost her 27-year-old daughter Camille on July 14, 2016 in the Nice attack on the Promenade des Anglais. At the opening of the trial on September 5, she came to Paris as a civil party.

After the attack of July 14, 2016 in Nice, she had become a familiar face. Anne Murris is Camille’s mother who died during this terrible attack. In the salle des pas perdus of the special assize court in Paris, she agreed to answer our questions.

Anne Murris: The Memorial of the Angels association is a civil party in this legal procedure. The association has done a lot of work since September 2021 to try to invite the maximum casualties to become a civil party because the status of victim meets certain things but the status of civil party meets other expectations. Obviously, some victims already had advice so we suggested that they continue to work with the lawyers who had taken them over for their Guarantee fund, others did not have one and some chose to hire the association’s lawyer.

This beginning of the trial is a very difficult day. There is a lot of revival. I have exactly the same feeling as six years ago when I was looking for my daughter Camille and going to the victims’ house to find out if we had any news. I have exactly the same feelings: there are a lot of suffering, sadness, distress and fear too. It’s a very big malaise that invaded me from the day before the trial when we arrived in Paris. I had a lot of emotions. I was in tears. It’s very complicated.

I don’t know, I have to take care of myself because I have health problems. I will see how I will endure these first days. I will see what my body can handle it.

All the issues that will be discussed are important. They respond to family problems. For example, organ harvesting is something very difficult for the families concerned. We have to give them an answer. We are obliged to bring them! Some people are still waiting for their child’s organs. Afterwards, in a more general way, what seems important to me is to have the truth. But the truth, to know what is the degree of involvement of the different people who are in the box and to be able to establish their exact and precise knowledge of this attack, so that the fairest possible sentences are imposed.

We want the penalties to be as severe as possible. It is in this sense that the association works. Obviously, by being very respectful of the law and the rule of law which is ours, but that it be the most severe, we believe in the educational value of the sanction, but we also believe in the deterrent value of a sanction.

These sanctions will not only be a response for the victims but also a response for society in general. This will be the judicial response to the fight against terrorism.

Anne Murris: It’s because I’m there without being there. I’m there physically, I try to be the best I can but my mind is everywhere. I am there, but I am elsewhere. I am caught up in my own suffering. It’s complicated for me because obviously, I have my daughter inside me and that’s the hardest part.”